Our country is the leader of the free world, and this is the best we can come up with?

And these people have been in elected office for a combined 125+ years!

Please notice that all of these people are either from the West coast or the East coast.

Our methods of selecting governmental representatives must be seriously flawed.

Either that, or the American people aren’t as smart as we think we are.

In any case, God, help us, and God help the world.

Senator UpChuck Schumer from the Peoples’ Republic of New York.

They should sell hats with “PRNY” on them!

Yeah!  This sales could help support all of the criminals released back into the community without bail…, not to mention their future innocent victims.

Senator Charles (Chuck) Schumer shot his mouth off the other day, while speaking out in front of the Supreme Court building.

So what is all of the fuss about?

Mr.EricksonRules is going to pull all of the pertinent information together for you and give you the proper perception of Senator Schumer’s words, as well as of the responses of others.

It all started with what democrat Senator Chuck Schumer said while speaking at an abortion rights rally outside of the Supreme Court on March 4, 2020.

“Now we stand here today because behind me, inside the walls of this Court, the Supreme Court is hearing arguments, as you know, for the first major abortion rights cases since Justice Kavanaugh and Justice Gorsuch came to the bench.”

“From Louisiana, to Missouri, to Texas, Republican legislatures are waging war on women, all women. And they’re taking away fundamental rights. I want to tell you Gorsuch, I want to tell you Kavanaugh, you have released the whirlwind and you will pay the price. You won’t know what hit you if you go forward with these awful decisions.”

Well, that definitely sounds like a threat to me.

Since Justice Gorsuch and Justice Kavanaugh are appointed for life and don’t have to be re-elected, how exactly will they “pay the price,” Mr. Schumer?

And what do you think they are going to be “hit” with?

President Trump tweeted, “There can be few things worse in a civilized, law abiding nation, than a United States Senator openly, and for all to see and hear, threatening the Supreme Court or its Justices. This is what Chuck Schumer just did. He must pay a severe price for this!  — Donald J. Trump (@realDonaldTrump) March 5, 2020”

According to Ian Millhiser for the VOX website, Schumer’s words, “received a rare public rebuke from Chief Justice John Roberts.”

“Roberts, for his part, interpreted this statement as a direct threat against Justices Neil Gorsuch and Brett Kavanaugh, and it’s easy to see why. ‘Justices know that criticism comes with the territory,’ the chief justice said in his statement rebuking Schumer. ‘But threatening statements of this sort from the highest levels of government are not only inappropriate, they are dangerous.’”

I think everyone should complete agree with Chief Justice Roberts words.

And excuse Mr. Millhiser, why would the Chief Justice interpret Schumer’s words any other way but as a “direct threat against Justices Neil Gorsuch and Brett Kavanaugh?”

Senator Schumer specifically called them out.

Any other interpretation is completely disingenuous and propagandistic spin. 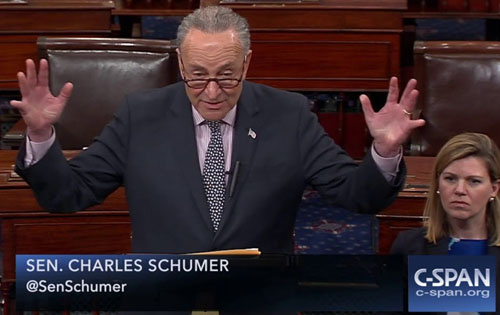 The next day, after being reprimanded in The Senate by Senate Majority Leader Mitch McConnell, Senate Minority Leader Charles Schumer said, “I should not have used the words I used yesterday.  They did not come out the way I intended to.”

Hmmm…, that’s funny, because you’ve been at this talking thing for quite a few years now…, in fact, it’s your job!  I’m pretty sure you said exactly what you intended to say.

Are we to believe that you were that confused and unable to say what you really meant for some unknown reason?

Oh, but I think there is, Mr. Ian Millhiser…, and I wouldn’t necessarily classify his statements as “vague” either.

Why do I feel that if President Trump would have said these things you wouldn’t have classified his remarks as “vague?”

Anyway…, back to the law I think was violated here.

Schumer continued with his “apology” in The Senate by saying, “Of course, I did not intend to suggest anything other than political and public opinion consequences for the Supreme Court, and it is a gross distortion to imply otherwise.” 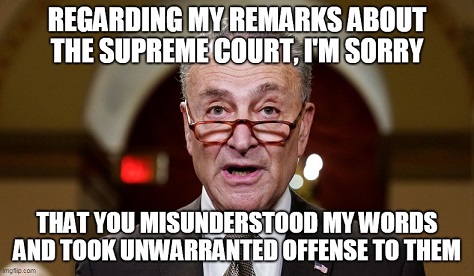 “I’m from Brooklyn,” Schumer then explained. “We speak in strong language. I shouldn’t have used the words I did, but in no way was I making a threat. I never, never, would do such a thing. And Leader McConnell knows that. And Republicans, manufacturing outrage over these comments know that too.”

Chucky, Chucky…, where should I begin?

First of all, you “of course” are not given credit for anything.

Second of all, you yourself are the one attempting the “gross distortion here,” not anyone else.

Next you somehow are attempting to blame what you said and how you speak on being from Brooklyn?

Then you say people from Brooklyn speak in “strong language?”

People from Brooklyn speak in “strong language” compared to who?

In your estimation, Mr. Schumer, are there any people who talk in stronger language who would be excused from saying ever dumber things than you?

Lastly I’d like to talk about various politicians and various media outlets attempting to justify Schumer’s comments based on comments President Trump has made about The Supreme Court.

OK…, so what has President Trump said?

Amanda Holpuch of The Guardian reports that, “While ‘elections have consequences’ – a reference to his [President Trump’s] two Supreme Court appointments since winning the White House, both reliable conservatives – ‘I only ask for fairness, especially when it comes to decisions made by the United States Supreme Court!’”

“At a press conference in India, [President Trump] Trump repeated his complaint.”

‘“I just don’t know how they [Justices Ginsberg and Sotomayor] cannot recuse themselves from anything having to do with Trump or Trump-related,’ he said. ‘The right thing to do is that.’”

‘“What Justice Sotomayor said … was really highly inappropriate and everybody agrees to that. Virtually everybody. I’ve seen papers on it, people cannot believe that she said it.’”

President Trump expressing his opinion and concern about certain Justices, based on prior inflammatory remarks, and their ability to judge fairly and without bias, is completely different from Senator Schumer’s threatening remarks. 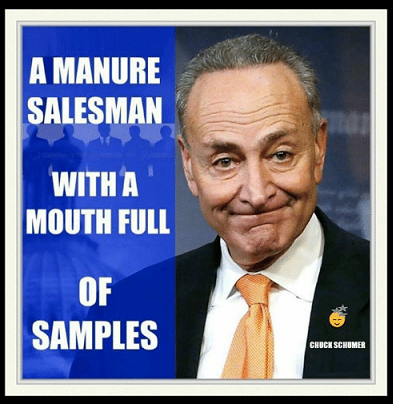