Why anyone cares what Cher has to say is beyond me, but in the liberals’ world it seems she is considered a wise old sage, ala Barbra Streisand, Bette Midler, and Whoopi Goldberg.

In this instance, Cher has demanded that Nancy Pelosi end this partial government shutdown and fund the border wall, tweeting to Nancy, “DON’T DIE ON THIS HILL.”

Maybe I need to reconsider my thoughts on Cher!

Cher has also admitted that she felt she went “too far” with her latest criticisms of President Trump (Whaaat?!), although she’s not exactly sorry for calling him a “cancer ravaging our nation (That sounds more like the Cher I know and love!).”

“I Say What I feel, But There’s a Responsibility That Goes With That,” the 71-year-old singer and actress tweeted. “I Walk Knifes Edge, But Sometimes It’s Too far. This Is Not An Apology….Its a Reprimand.”

She continued, “Just Because I CAN SAY ANYTHING…Doesn’t Mean I SHOULD. Sometimes I Learn The Hard Way, Over & Over. Humans are Fallible.”

Cher’s semi-apology came shortly after she described Trump as a “malignant tumor eating its way through our constitution” in a since-deleted tweet, according to Breitbart News Network.  The news site also reported that Cher called President Trump a “criminal,” a “sociopath” and a “despot.”

According to Fox News, “This is hardly the first time Cher has lashed out against Trump and members of his administration.”

“At an August 2016 Hillary Clinton fundraiser, the singer compared Trump to Hitler and told reporters that Trump was ‘a racist, he’s a misogynist, he’s a horrible person.’”

“She took to Twitter in January to express her sentiments about White House Press Secretary Sarah Sanders’ style and shamed her for her everyday wear.”

“The singer illustrated her tweet with an image of two women in stereotypical clothing.  In the photo the women also sport braids, plain lace-up shoes and high-neck dresses with long sleeves and puffy shoulders.”

After President Trump delivered a prime-time address from the Oval Office making the case for funding the border wall, which was followed by a response from House Speaker Nancy Pelosi, D-Calif., and Senate Minority Leader Chuck Schumer, D-N.Y., who argued that the president must reopen the government in order to continue conversations about border security, Cher took to Twitter to blast the president for promising that Mexico would pay for the wall and demanded him to end the government shutdown.

The next day, however, she called out Pelosi: “NANCY YOU ARE A HERO. LET (Trump) HAVE HIS FKNG MONEY. PPL WILL STARVE LOSE THEIR HOMES, B UNABLE 2 C DRS.”

Cher then demanded Democrats to “stop” the shutdown before Trump does: “HELL B HERO… HE’LL EAT UR LUNCH & STEAL UR LUNCH YOU’LL B FKD 6 WAYS 2 SUNDAY.DONT DIE ON THIS HILL. HE STOPS AT NOTHING.”

I’m sorry Nancy, but I feel that I have to go along with Cher on this one.  You need to let President Trump have the money for the wall.

“If I could turn back time…,” I’d vote for Donald Trump all over again! 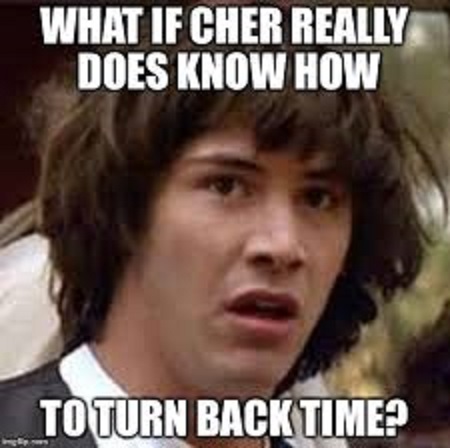