Ronn Blitzer of Fox News reported that, “President Trump retweeted a ‘photo-shopped’ image depicting House Speaker Nancy Pelosi and Senate Minority Leader Chuck Schumer in Muslim headwear with a backdrop of the Iranian flag, in the midst of a Monday morning Twitter spree where he shared a number of posts accusing Democratic leadership of supporting the Iranian government.”

I don’t really think President Trump’s tweets should be characterized as “accusations,” but rather as restatements of actual events.

“The president’s political opponents have blasted him for ordering the drone strike against Iranian Gen. Qassem Soleimani, who has been linked to numerous attacks on American forces and more. Meanwhile, they largely have remained silent as the Iranian people have staged massive protests against their leaders, in the wake of the government shooting down a passenger plane and initially denying it.”

‘“The corrupted Dems trying their best to come to the Ayatollah’s rescue,’ said the original tweet from user @D0wn_Under.”

“Trump later summed up his views on the matter, stating, ‘The Democrats and the Fake News are trying to make terrorist Soleimani into a wonderful guy, only because I did what should have been done for 20 years.’”

“The only ones that are mourning the loss of Soleimani are our Democrat leadership, and our Democrat presidential candidates.”

How true and how pathetic.

Well…, you could add the fake news media and your usual collection of Hollywood elites to the mourning mix as well.

But, we, of course, are forced to endure our dose of propagandistic mis-information administered to counter the truth.  “This kind of statement is ridiculous, inflammatory and dangerous. Rather than inform viewers, Ambassador Haley wants to divide Americans,’ said former Democratic National Committee Chairwoman Donna Brazile.

On the contrary, Ms. Brazile…, it is your statement which is “ridiculous” and divisive…, not ambassador Haley’s.

Tony Shaffer for the RealClear Politics website added, “As someone who went toe-to-toe with the Iranian Revolutionary Guard Corps (IRGC) in Afghanistan, I can assure you that Iranian Gen. Qassem Soleimani got exactly what he deserved when he perished in a U.S. drone strike. What he certainly doesn’t deserve is praise from Democrat lawmakers who would rather mourn a war criminal than credit President Trump for making the world safer.” 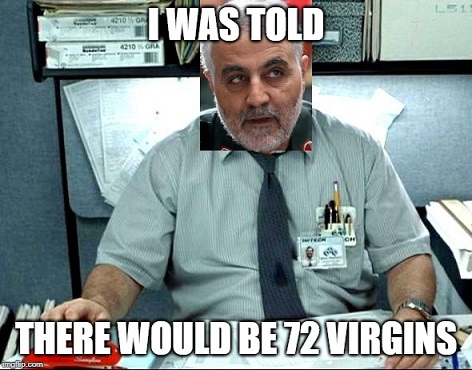 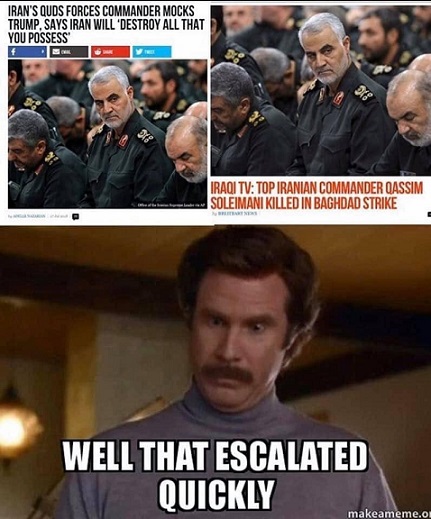 “As the leader of the IRGC’s Quds Force, [“Quds Force” is Iran’s unconventional arm that operates outside of the Iran’s borders] which has been designated a terrorist organization by the U.S. government, Soleimani was among America’s most vociferous and aggressive foes. He was personally responsible for the deaths of thousands, including the killing and maiming of hundreds of American soldiers. He was an evil, remorseless man, and his death is a positive development for the entire world — including his own country.”

“Speaker of the House Nancy Pelosi, however, is currently considering a resolution that labels the strike that killed Soleimani ‘provocative and disproportionate.’” 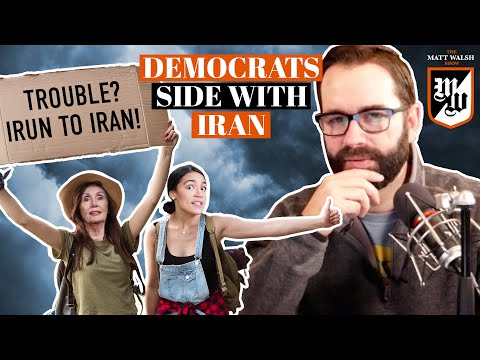 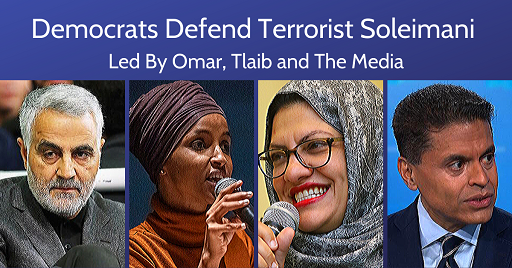 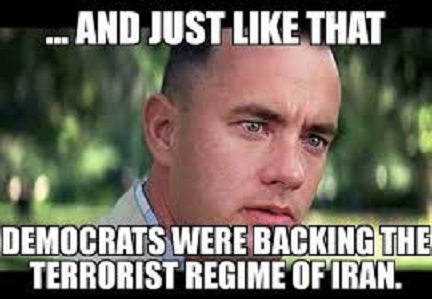 How many more American soldiers would have to die to make this a proportionate action in your eyes, Nancy?

“Predictably, the Democrats have been stoking fears about Iran’s potential response ever since they’ve learned about Soleimani’s death, pretending that the strike jeopardized U.S. security rather than enhanced it. It seems no liberal lawmaker is immune to the lure of political opportunism in the midst of a presidential election campaign.” 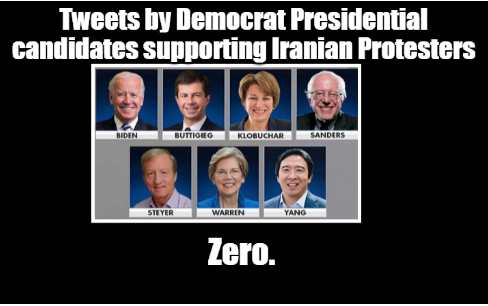 We’re not supposed to send a drone strike…, we’re supposed to send pallets of cash to those that regularly chant “death to America,” ala Obama and Biden, and hope for the best.  That’s the preferred democrat strategy for dealing with Iran.

“But while the Democrats join our enemies in mourning Soleimani’s demise, those with knowledge of Soleimani’s terror campaigns are celebrating the death of a genuine war criminal.”

“This man was a terrorist in charge of an IRGC element that had been declared a terrorist organization. He was traveling, in violation of U.N. sanctions, to Iraq, with the apparent intent of inflicting harm on U.S. service members in the region. He was in a combat zone as a combatant in uniform — the legal basis to target him could not have been clearer, and the same goes for the moral justification.”

“The Democrats are politicizing this issue the way they’ve politicized every other issue since President Trump took office. They don’t even seem to care that they have to take the side of America’s enemies in order to criticize Donald Trump.”

Well said…, but who is taking the side of whom exactly?

What you talkin’ ‘bout Mr. Excitement?!

What you talkin’ ‘bout Creepy Joe?!

Speaking to overflow “crowds” of 10 to 20 people, Joe Biden has continued to call President Trump’s Iran policy into question.

As if Joe Biden has a clue regarding any matter of foreign policy!

It’s a well-known fact in Washington that Joe Biden hasn’t shown ANY ability to properly understand and/or strategically react to any foreign policy situation over that last 40 years in an advantageous manner!

I’m sure Creepy Joe would prefer we fly a plane load of cash over to Tehran…, beg for their forgiveness, and hope for the best.

And as for Crazy Bernie, Lizzie the bag lady, and Pistol Pete…, I’m sure the Ayatollah and his friends have been having a good laugh at their expense.  They’ve also been praying to Allah that Americans are stupid enough to elect one of these “special” people!

However President Trump chooses to react to Iran’s latest missile attack, I’m sure his course of action will project American strength and resolve, and not American weakness and fear. 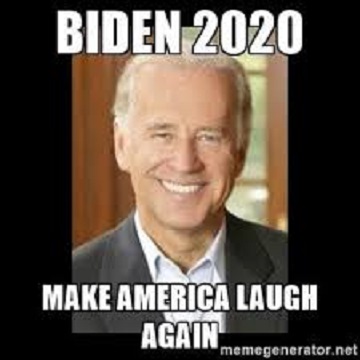 But let’s not forget that our reaction of taking out Iranian military commander Qasem Soleimani was in response to the Iran instigated attack on our embassy in Iraq, along with a long list of other terrorist acts.

Iran spends over a billion dollars a year promoting terrorism around the world while sponsoring groups such as Hezbollah, Hamas, Islamic Jihad, Al-Qaida and the Taliban.

Iran was the one who started this, not The United States and not President Trump.

By threatening to further retaliate against US bases, US assets and US personnel, the leaders of Iran have made President Trump’s job much easier, however.

It is much easier to hold a country accountable for its actions as opposed to some innocuous terrorist group.

And that has been the problem all along…, where do we direct our retaliation?

Well, Iran has just solved that problem for The United States and President Trump.

Since it’s common knowledge that most terrorist organizations in the Middle East are bankrolled by Iran, Iran has put itself in an awkward position.

Iran has positioned itself to “pay the price” for the actions taken by any group against The United States.

And President Trump has put them on notice.

As anchorman Ron Burgundy observed, I think Iran will find that this “was not a good choice.”

In fact, President Trump warned Iran that if it hits any Americans or American assets “we have targeted 52 Iranian sites” for retaliatory strikes.

Samantha Vinograd, an American foreign policy commentator who serves as National Security Analyst at CNN, said “Iran will consider this an act of war.”

Just like we consider an attack on any of our embassies an act of war.

We’ve heard it all before…, “death to America,” “rivers of blood,” yada, yada, yada.

“Donald Trump on Saturday drew what may come to be seen as the most significant red line of his presidency in a three-part tweet, vowing specific military action against Iran if it ‘strikes any Americans, or American assets.’”

‘“We are the biggest and by far the BEST in the World! If Iran attacks an American Base, or any American, we will be sending some of that brand new beautiful equipment their way…and without hesitation!’ he tweeted. ‘They attacked us, & we hit back. If they attack again, which I would strongly advise them not to do, we will hit them harder than they have ever been hit before!’”

‘“Iran is talking very boldly about targeting certain USA assets as revenge for our ridding the world of their terrorist leader who had just killed an American, & badly wounded many others, not to mention all of the people he had killed over his lifetime…. — Donald J. Trump (@realDonaldTrump) January 4, 2020’”

‘“He was already attacking our Embassy, and preparing for additional hits in other locations. Iran has been nothing but problems for many years. Let this serve as a WARNING that if Iran strikes any Americans, or American assets, we have targeted 52 Iranian sites (representing the 52 American hostages taken by Iran many years ago), some at a very high level & important to Iran & the Iranian culture, and those targets, and Iran itself, WILL BE HIT VERY FAST AND VERY HARD. The USA wants no more threats!  — Donald J. Trump (@realDonaldTrump) January 4, 2020’”

“The string of tweets came after the White House formally notified Congress on Saturday of the US operation that killed Iranian military commander Qasem Soleimani on Thursday.”

‘“Iran will be held fully responsible for lives lost, or damage incurred, at any of our facilities,’ Trump tweeted from Florida. ‘They will pay a very BIG PRICE! This is not a Warning, it is a Threat.’”

“And later Tuesday, while speaking with reporters as he entered a New Year’s Eve gala at Mar-a-Lago, the President said he doesn’t want war but that if it comes to conflict, Iran wouldn’t last long.”

‘“I don’t think that would be a good idea for Iran,’ Trump said, adding later that a potential conflict ‘would go very quickly.’” 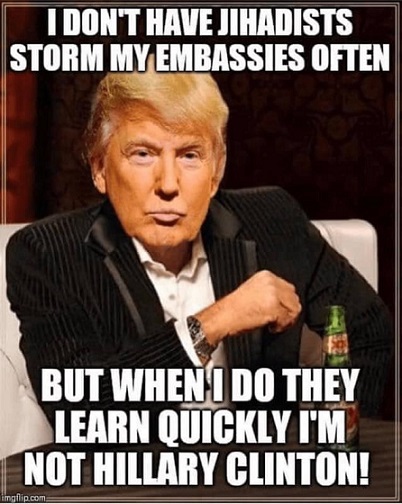 MrEricksonRules has been promoting a strategy like this for years.

All that was needed was an identifiable enemy who could be held accountable and a leader bold enough to issue this type of ultimatum.