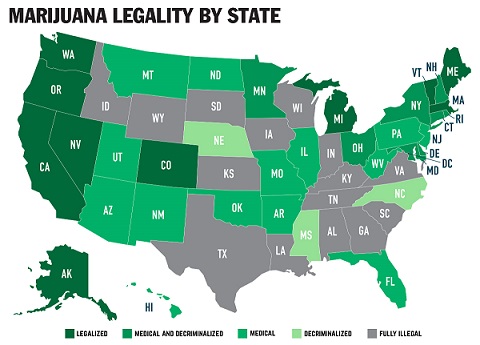 My answer is, “Isn’t it pretty much legal already?”

As of today, recreational marijuana is legal in eleven states and Washington DC.

And 14 states have decriminalized marijuana.

If smoking marijuana is that important to you, there are plenty of places in our country now where you can do it legally.

I don’t think there is much question anymore about the medicinal value of marijuana, in many cases, either.

It cracks me up when I hear people in the government say “we need to study the effects of marijuana before we choose to legalize it or not.”

People have been smoking marijuana in this country for well over 50 years!

Shouldn’t we be aware of all of the positive and negative effects by now?

But let’s look at the bigger picture.

My overall belief, basically, is that our state and federal governments should not be in the babysitting business.

Nor should we be in the business of telling others how they should conduct their lives.

Except where their behavior affect others.

All of this “stuff” should be “legal.”

People should be allowed to do whatever it is they want to do, again, as long it doesn’t harm anyone else.

If you want to sit in your home and smoke weed until you can’t see straight, I have no problem with that.

If you want to then try and drive a car, then I’ve got an issue with you.

If you truly believe in a “free” society, you should agree with me.

If someone wants to drink themselves to death or fry their brains with their drug(s) of choice, more power to them, again, as long as what they’re doing doesn’t affect me or anyone else.

I mean, people are doing all of this crap regardless, aren’t they?

We are just adding layers of violence into the equation by making this illegal and that illegal.

I believe we have to allow people to be as self-destructive and as stupid as they want to be.

This doesn’t mean we can’t be nice, considerate and helpful to one another…, it just means no one should impose their beliefs of personal behavior on anyone else…, AS LONG AS WHAT YOU’RE DOING ISN’T HARMING ANYONE ELSE.

Nobody is saying you have to like what anyone else is doing.

What are your feelings regarding this matter?

1 but Jesus went to the Mount of Olives. 2 At dawn he appeared again in the temple courts, where all the people gathered around him, and he sat down to teach them. 3 The teachers of the law and the Pharisees brought in a woman caught in adultery. They made her stand before the group 4 and said to Jesus, “Teacher, this woman was caught in the act of adultery. 5 In the Law Moses commanded us to stone such women. Now what do you say?” 6 They were using this question as a trap, in order to have a basis for accusing him. But Jesus bent down and started to write on the ground with his finger. 7 When they kept on questioning him, he straightened up and said to them, “Let any one of you who is without sin be the first to throw a stone at her.”

“10 You, then, why do you judge your brother or sister? Or why do you treat them with contempt? For we will all stand before God’s judgment seat. 11 It is written: ‘As surely as I live,’ says the Lord, ‘every knee will bow before me; every tongue will acknowledge God.’ 12 So then, each of us will give an account of ourselves to God. 13 Therefore let us stop passing judgment on one another. Instead, make up your mind not to put any stumbling block or obstacle in the way of a brother or sister.”

“17 For God did not send his Son into the world to condemn the world, but to save the world through him.”