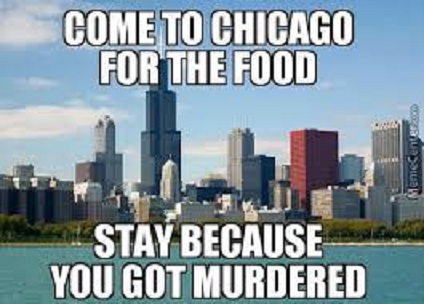 Chicago, Illinois and its liberal democrat leadership claim it be a “sanctuary” city.

I think you’d be safer walking around downtown Baghdad, taking a hike through North Korea or spending a weekend in Benghazi.

According to Merriam-Webster, “sanctuary” means “a place of refuge or safety.”

Elizabeth Llorente of Fox News reported that “Chicago has most violent weekend this year: 52 shot, 10 dead.

Wow…, 52 shot and 10 dead in one weekend!  Those numbers prompted me to look more closely at some other numbers.

So I decided to look at the casualty numbers from the war in Afghanistan and see how the “sanctuary” city of Chicago compared.

From 2012-2018, 6 years, the total number of deaths suffered by our military personnel in Afghanistan was 857.

You can tack on another 20,000 or so casualties during that time frame as well.

This is a “sanctuary” city?

A “sanctuary” for who?

Chicago is the third largest city in the United States.

It is also, by definition, a “war zone.”

Actually…, based on the numbers, Chicago is worse than the war zone in Afghanistan.

According to Kristine Frazao of WJLA-TV in Washington D.C., “Some states with strictest gun laws also have the most dangerous cities.”

“One of the top ten states with the most restrictive gun laws in the country is Illinois, where last year there were 650 murders in Chicago alone, according to a USA Today’s compilation of crime data.”

“In Maryland, another state with some of the strictest gun laws in the country, Baltimore had 343 murders last year and has highest per capita murder rate in the nation. The city was also just named the most dangerous city in America by USA Today.”

Liberals still haven’t figured out that criminals typically don’t follow “the law!”  Or maybe they have, but they just don’t care.

“Chicago Mayor Lori Lightfoot has said she’s considering replacing Johnson [Chicago Police Superintendent Eddie Johnson], but will not decide until after a more thorough study of the city’s problems, according to WGN-TV.”

“On Twitter, [Department spokesman Anthony] Guglielmi assailed a program known as ‘I-Bond’ that allows Cook County offenders to be released on a no-cash bond. The program was implemented in 1982 to address jail overcrowding.  But critics long have said it provides criminals a fast way to get back on the streets.”

‘“Letting gun offenders out on I-Bonds shows there is absolutely no repercussion for carrying illegal guns in Chicago,’ Guglielmi tweeted.”

In my mind, you would address jail overcrowding by building a bigger jail or another jail…, not letting criminals back out on the street who are a threat to the community…, but that’s just me. 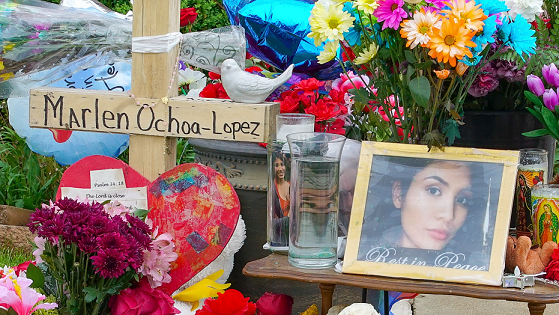 A memorial of flowers, balloons, a cross and photo of victim Marlen Ochoa-Lopez, are displayed on the lawn, Friday, May 17, 2019 in Chicago, outside the home where Ochoa-Lopez was murdered last month. Assistant State’s Attorney James Murphy says a pregnant Ochoa-Lopez, who was killed and whose baby was cut from her womb, was strangled while being shown a photo album of the late son and brother of her attackers. (AP Photo/Teresa Crawford)

Again…, just off the top of my head now…, I would say that part of the problem is that some of these gang members are not even human beings!

These people don’t need to be let out on bail when they’re caught…, they need to be locked up and the key thrown away…, regardless of how much it costs to keep them behind bars.

The alternative is more people are going to die.

These liberal “do gooders,” which is a fallacy all on its own, should be forced to live in the neighborhoods these “things” prey on.

They are obviously willing to take their chances with the lives of other law abiding citizens in Chicago…, why not their own?

The Associated Press also contributed to this story.