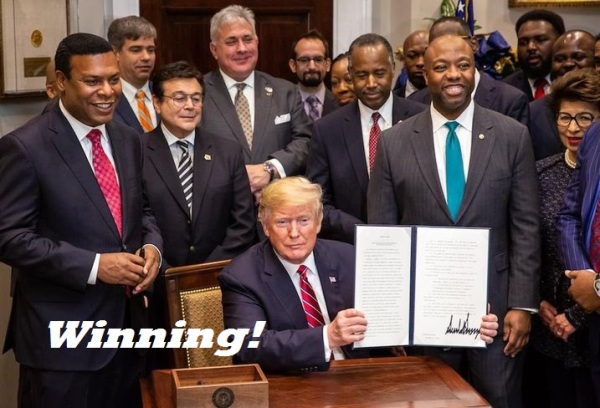 If you weren’t watching Fox News at some point this last week, you probably missed it when President Trump announced a bold and historic plan to change the lives in America of some of our poorest citizens, those who live in the most distressed, and sometimes the most dangerous, neighborhoods.

With South Carolina Senator Tim Scott and Black Entertainment Television (BET) founder Bob Johnson flanking him, and CNN host Van Jones looking on, The President signed an executive order creating something called the White House Opportunity and Revitalization Council along with additional directives for that council.

So what, you may ask?  We’ve all seen this kind of thing before, right?

Well, this may be different.

Led by The Department of Housing and Urban Development (HUD) Secretary Ben Carson, it will coordinate efforts across the entire federal government to deliver jobs, investment, and growth in underprivileged areas.  This includes rural areas, too.  This means more private-sector money will flow into some of these high-risk or low development areas.

And what will this do?

It’s kind of like affirmative action, but on a larger socio-economic and community level, and for some reason I don’t have a problem with this at all.  I actually think this a great way to spread the wealth and lift people and communities up.

I believe a program like this is right up Secretary Carson’s alley.  I would expect him to do a great job with this.

Oddly enough, there were only a few reporters at the announcement, and they weren’t even interested in the announcement.  All they were interested in was shouting questions at The President about Michael Cohen.  That’s because Michael Cohen and the Mueller witch hunt fits the “biased, liberal, fake news media’s” narrative and President Trump delivering results to low income Americans doesn’t.

This White House event wasn’t broadcast on cable or on C-SPAN or any of the networks.  Why was that?

It’s called commission by omission.  If we don’t report it, then it didn’t really happen.  The “biased, liberal, fake news media” just refuses to give President Trump credit for anything that could be perceived as positive.

Also, it’s because President Trump is delivering some actual results for those people who the Democrats thought that they had in their back pocket, politically.  It all goes against the “biased, liberal, fake news media’s” never ending narrative about how the president is racist and how he just doesn’t care about minority citizens or low income citizens.

Bob Johnson, one of the most prominent and most successful African-Americans on the planet, would disagree with that sentiment.  He was on hand at Wednesday’s event to recognize the Trump administration’s drive and commitment to help low income Americans.

“Just recently, your Department of Labor signed a historic document that created something called “auto portability.”  Auto portability is designed to reduce retirement leakage among low income 401(k) account holders who tend to cash out,” he said. “And Mr. President, you should know this, 60 percent of African-American and Hispanic-Americans cash out of their 401(k) accounts.  This program will put close to $800 billion back in the retirement pockets of minority Americans.  So I just want to applaud you for that.”

Laura Ingraham of Fox News commented, “Who cares more about America, particularly the working poor? The guy who delivers results, record low unemployment, opportunity zones and a decent chance for criminal justice reform?  Or a party that is all talk and no action?  I will take the former any day.”

“…talking about hope is beautiful, but it won’t bring business into your community.  People who can get jobs tend to have more hope.  Despair and crime in places like Chicago and Baltimore spiraled out of control during much of Obama’s eight years.”

With all of the potential positive outcomes as a result of the Opportunity and Revitalization Council and The President’s executive order, the “biased, liberal, fake news media” did manage to find one aspect they thought was worth mentioning.  They reported that President Trump and his son-in-law Jared Kushner are only pushing these inner-city investment incentives because they will make money off their own real estate holdings.

President Trump is completely correct and justified when he calls out the “fake news.”

It’s sad that there isn’t even an inkling of an effort by the “fake news” to report the news fairly and honestly anymore.  It has become an all-out propaganda war now, and fair minded people just have to be aware of it and treat it as such.