Thank you Chevy.  I’ve been saying that for years now.

“Comedy legend Chevy Chase, one of the biggest stars to emerge from the early “Saturday Night Live,” had some harsh words for his old show.”

In an interview with The Washington Post, the comic said:

“First of all, between you and me and a lamppost, jeez, I don’t want to put down [executive producer] Lorne [Michaels] or the cast, but I’ll just say, maybe off the record, I’m amazed that Lorne has gone so low.  I had to watch a little of it, and I just couldn’t f**king believe it.”

I agree with Chevy, and I’ve been saying this for years now, especially since Donald Trump was elected President.  I watch the show and it just doesn’t make me laugh.  It’s just not funny.  That’s the bottom line.  In many cases it has the opposite effect, just plain annoying me or making me mad.

“When reminded of the show’s popularity, Chase didn’t back down.”

“‘That just means a whole generation of sh*theads laughs at the worst f**king humor in the world,’ he said. ‘You know what I mean?  How could you dare give that generation worse sh*t than they already have in their lives?  It just drives me nuts.’”

Again, I totally agree with Chevy here.  I hear the audience laughing at this stuff and I’m thinking, “Do you really think this is funny, or are you laughing because you think you’re supposed to?”  It drives me nuts as well.

And regarding the show’s “popularity,” that is questionable.  The show has a 4.1 Nielsen rating, which equates to roughly 10 million viewers, which is like 3% of the country.  Hardly anything to get too excited about.

“Chase was once dubbed ‘the funniest man in America’ by New York magazine.” 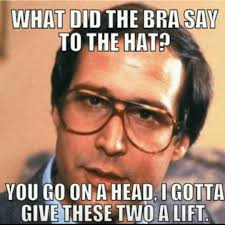