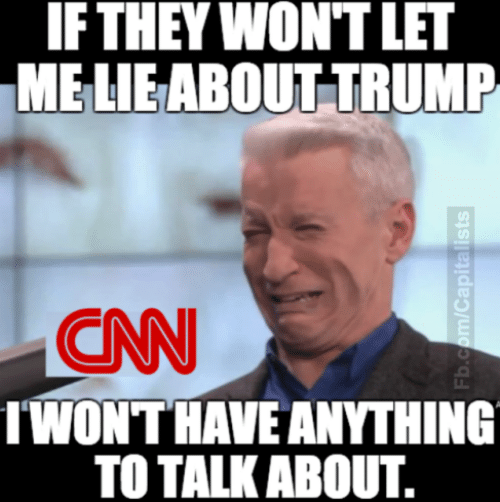 President Trump sat down with “Fox News Sunday” host Chris Wallace, for an interview, November 18, 2018, regarding his first two years in the nation’s highest office.

This blog is my reaction to CNN Editor, Chris Cillizza’s reaction to the Chris Wallace interview.

Mr. Cillizza went through the transcript from the interview and picked out, in his words, “the most, uh, memorable lines” of the interview in his opinion.

Mr. Cillizza had no positive reaction to anything The President said, of course.  He was only looking for comments by The President to be critical of.

Here are President Trump’s statements (PT), Chris Cillizza’s comment (CC), and my reaction to it all (MER.)

PT: “There was no collusion whatsoever, and the whole thing is a scam.”

MER: Robert Mueller and his motley crew have been at this “investigation” for coming up on two years now, and they have not come up with anything to do with the Trump campaign’s imaginary involvement with Russia or anything against The President.  All of these charges and criminal counts are for unrelated and miscellaneous items.  Mr. Cillizza’s comments are disingenuous, and they imply The President’s comment is incorrect, when in fact The President is absolutely correct.

PT: “I won the Senate, you don’t mention that.”

CC: “He won the Senate.  Not the candidates, or the party, Donald Trump won it.”

MER: President Trump was only replying to the statement in the manner it was made.  Chris Wallace stated “you lost the House of Representatives…,” and President Trump Responded with, “I won the Senate, you don’t mention that.”  In general, it probably would have helped Mr. Cillizza if he had actually watched the interview as opposed to just reviewing the transcript.

CC: “Um. So, Trump won the Senate but any losses can’t be blamed on him because he wasn’t on the ballot. [Puts on green accountant visor thing-y] Yup, this all adds up.”

MER: That’s really cute Mr. Cillizza, but disingenuous again.  President Trump didn’t say “losses couldn’t be blamed” on him.  He just stated the fact that he “wasn’t on the ballot,” which is true.

MER: Granted, The President was maybe a little choppy with his wording here, but I think we all got the gist of what he was saying.  I also do not recall any of President Obama’s incoherent rambling, at any point, being referred to as a “word salad.” Just saying.

PT: “And it was all stacked against Brian, and I was the one that went for Brian and Brian won.”

MER: With all due respect Mr. Cillizza, the race for governor was “stacked against him.”  “Outside” democrat money poured into this campaign; over $65 million in total.  Stacey Abrams was funded by George Soros and other democrats with seemingly endless resources.  Former President Barack Obama campaigned in Georgia for Abrams, and Oprah Winfrey made campaign stops on numerous occasions as well.

MER: Technically you’re correct here, Mr. Cillizza, that was the final, official count, but that was only after the democrats were allowed to keep voting for an additional week, and conveniently misplace or lose other republican ballots during the recount.  If Florida’s election results had been tabulated properly and fairly, yes, Rick Scott would have “won by a lot,” considering he was unseating a Senator who had been in office for decades.

PT: “The news about me is largely phony. It’s false. Even sometimes they’ll say, ‘Sources say.’ There is no source, in many cases, in [other] cases there is.”

CC: “Again, this is about Donald Trump not liking the news. Not about the news being “largely phony.” And the idea that mainstream media organizations make up sources is beyond ridiculous.”

MER:  No, this isn’t about President Trump “not liking the news,” it’s about President Trump not liking being treated unfairly.  It’s about “fake news” that is created to suit the liberal narrative, and it’s about “fake news” that very rarely cites an identifiable source.  Additionally, I would classify nothing the “biased, liberal, mainstream media” does as being “beyond ridiculous.”

PT: “He’s a Hillary Clinton backer and an Obama backer.”

CC: “Trump is talking here about William McRaven, the former head of US Special Operations Command and the architect of the raid that led to the death of Osama bin Laden. Why? Because McRaven said that Trump’s attempts to undermine the press were a threat to democracy. And because Trump is incapable of seeing anything outside of a purely partisan lens. Also, Trump is wrong about McRaven’s political preferences; ‘I did not back Hillary Clinton or anyone else,’ McRaven told CNN.”

PT: “And, Chris, you know that better…, you don’t have to sit here and act like a perfect little, wonderful, innocent angel.  I know you too well. I knew your father too well, that’s not your gene.”

CC: “I am frankly surprised that it took this long for Trump to turn on Wallace.  Despite the obvious pro-Trump bias of lots of the shows (and people) on Fox news, Wallace is a straight-shooter and tough questioner. I’m actually surprised, given that, that Trump agreed to sit down for an interview with him.”

PT: “I think I’m doing a great job. We have the best economy we’ve ever had.”

MER: President Trump could afford to be more modest if the “biased, liberal, fake news media” were able to give him credit for anything he has accomplished or reported anything he does from a positive point of view.

MER: First of all, you don’t know what President Trump “hates to do,” or what he doesn’t “hate to do.”  He feels he has done an excellent job, apparently, and I would tend to agree with him.

President Trump typically responds in the same manner that he is addressed, and usually in an even nicer tone. He is not your typical politician, and he generally responds with an honest opinion or answer, like it or not.  He doesn’t “talk down” to his audience, nor does he try to talk over their heads.

Stay thirsty my friends, but don’t drink that liberal Kool-Aid!