Christmas IS the most wonderful time of the year!

Let’s take a look at the history, the traditions and the spirit of Christmas.

Christmas (“Christ’s Mass”) is a Christian holiday honoring the birth of Jesus, although it has evolved into a worldwide religious and secular celebration, incorporating many different traditions.

For over two thousand years, people around the world have been observing Christmas with traditions and practices that are both religious and secular in nature.

Christians celebrate Christmas Day as the anniversary of the birth of our Savior, Jesus of Nazareth.  The actual date of Jesus’ birth is not known.

December 25th, Christmas Day, has been a federal holiday in the United States since 1870, but winter and “Christmas” celebrations go back hundreds and thousands of years.

Centuries before the birth of Jesus, early Europeans celebrated light and birth in the darkest days of winter.  Many people rejoiced during the winter solstice, when the worst of the winter was behind them and they could look forward to longer days and extended hours of sunlight.

In Scandinavia, the Norse celebrated “Yule” from December 21, the winter solstice, through January. In recognition of the return of the sun, fathers and sons would bring home large logs, which they would set on fire. The people would feast until the log burned out, which could take as many as 12 days.

In the early years of Christianity, Easter was the main holiday.  The birth of Jesus was not even celebrated.  It wasn’t until the fourth century (the 300s), that church officials decided to institute the birth of Jesus as a holiday.

Unfortunately, the Bible does not mention the date of Jesus’ birth.  Pope Julius chose December 25 as the day The Church would celebrate Jesus’ birth.  It is commonly believed that the church chose this date in an effort to adopt and absorb the traditions of the pagan Saturnalia festival.  First called the Feast of the Nativity, the custom spread to Egypt by 432 and to England by the end of the sixth century.  By the end of the eighth century (the 700’s), the celebration of Christmas had spread all the way to Scandinavia.

By holding Christmas at the same time as traditional winter solstice festivals, church leaders increased the chances that Christmas would be popularly embraced, but gave up the ability to dictate how it was celebrated.  By the Middle Ages, Christianity had, for the most part, replaced pagan religion.  On “Christmas,” believers attended church, then celebrated raucously in a drunken, carnival-like atmosphere similar to today’s Mardi Gras.  Each year, a beggar or student would be crowned the “lord of misrule” and eager celebrants played the part of his subjects. The poor would go to the houses of the rich and demand their best food and drink.  If owners failed to comply, their visitors would most likely terrorize them with mischief.  Christmas became the time of year when the upper classes could repay their real or imagined “debt” to society by entertaining less fortunate citizens.

In the early 17th century (the early 1600’s), a wave of religious reform changed the way Christmas was celebrated in Europe. When Oliver Cromwell and his Puritan forces took over England in 1645, they vowed to rid England of decadence and, as part of their effort, cancelled Christmas.  By popular demand, Charles II was restored to the throne and, with him, came the return of the popular holiday.

Christmas was not a holiday in early America, due to the Puritan nature of the Pilgrims.  From 1659 to 1681, the celebration of Christmas was actually outlawed in Boston.  Anyone exhibiting the Christmas spirit was fined five shillings.

It wasn’t until the 19th century (the 1800’s) that Americans began to embrace Christmas.  Americans re-invented Christmas, and changed it from a raucous carnival holiday into a family-centered day of peace and nostalgia.

The early 19th century was a period of class conflict and turmoil.  During this time, unemployment was high and gang rioting by the disenchanted classes often occurred during the Christmas season.  In 1828, the New York city council instituted the city’s first police force in response to a Christmas riot.  This was the catalyst for certain members of the upper classes to begin to change the way Christmas was celebrated in America.

In 1819, best-selling author Washington Irving wrote “The Sketchbook of Geoffrey Crayon, Gent.”  It was a series of stories about the celebration of Christmas in an English manor house. The sketches feature a squire who invited the peasants into his home for the holiday. In contrast to the problems faced in American society, the two groups mingled effortlessly.  In Irving’s mind, Christmas should be a peaceful, warm-hearted holiday bringing groups together across lines of wealth or social status.  Irving’s fictitious celebrants enjoyed “ancient customs,” including the crowning of a Lord of Misrule.  Irving’s book, however, was not based on any holiday celebration he had attended, in fact, many historians say that Irving’s account actually “invented” tradition by implying that it described the true customs of the season.

Also around this time, English author Charles Dickens created the classic holiday tale, “A Christmas Carol.”  The story’s message of the importance of charity and good will towards all humankind struck a powerful chord in the United States and England and showed members of Victorian society the benefits of celebrating the holiday.

In my estimation, Charles Dickens was the one who set the tone and established the spirit of Christmas that we know and love today.

The family was also becoming less disciplined and more sensitive to the emotional needs of children during the early 1800s. Christmas provided families with a day when they could lavish attention, and gifts, on their children without appearing to “spoil” them.

As Americans began to embrace Christmas as a perfect family holiday, old customs were unearthed.  People looked toward recent immigrants and Catholic and Episcopalian churches to see how the day should be celebrated.  In the next 100 years, Americans built a Christmas tradition all their own that included pieces of many other customs, including decorating trees, sending holiday cards and gift-giving.

Although most families quickly bought into the idea that they were celebrating Christmas how it had been done for centuries, Americans had really re-invented a holiday to fill the cultural needs of a growing nation.

The “American” Christmas nowadays does not really align with the “Church’s” Christmas season anymore.

Americans typically switch into “Christmas mode” right after, or even during the Thanksgiving celebration, a month before Christmas Day.

This really aligns with the season of “Advent” on the Church’s liturgical calendar.

Advent (from the Latin word adventus, which means “arrival” or “coming”) is the first season of the liturgical year.  It begins four Sundays before Christmas, the Sunday falling on or nearest to November 30, and ends on Christmas Eve. Traditionally observed as a “fast”, it focuses on preparation for the coming of Christ.  Advent “a period for devout and joyful expectation”.

This season is often marked by the Advent Wreath, a garland of evergreens with four candles. Although the main symbolism of the advent wreath is simply marking the progression of time, many churches attach themes to each candle, most often ‘hope’, ‘faith’, ‘joy’, and ‘love’. Other popular devotions during Advent include the use of the Advent Calendar or the Tree of Jesse to count down the days to Christmas.

The “Christmas” season immediately follows Advent. The traditional Twelve Days of Christmas begin with Christmas Eve on the evening of December 24 and continue until the feast of Epiphany. The actual Christmas season continues until the Feast of the Baptism of Christ, which in the present form of the Roman Rite is celebrated on the Sunday after January 6, or the following Monday if that Sunday is Epiphany.

So in the Church, “Christmas,” and the Christmas season does not actually begin until Christmas Day.

Here are some great Christmas traditions my family has, along with some interesting ones I’ve heard of:

“Mary did you know?” – CeeLo Green

“All I Want For Christmas is You” by Mariah Carey

“I’ll be home for Christmas” by Elvis Presley

“Have a Holly Jolly Christmas” by Burl Ives

“Merry Christmas Darling” by The Carpenters

“Have Yourself a Merry Little Christmas” by Frank Sinatra

“Mistletoe and Holly” by Frank Sinatra

“Have Yourself A Merry Little Christmas” by Judy Garland

“Do You Hear What I Hear?” by Bing Crosby

“Angels We Have Heard On High”

“Away in a Manger”

“I Saw Mommy Kissing Santa Claus” by The Beverly Sisters

“We Wish You a Merry Christmas”

“Home For The Holidays” by Perry Como

“Carol Of The Bells/Deck The Halls” by Robert Shaw Chorale

“Joy To The World” by Julie Andrews

“Rockin’ Around The Christmas Tree” by Brenda Lee

As Buddy from the 2003 movie “Elf” explains, “The best way to spread Christmas cheer is by singing loud for all to hear!”

“A Christmas Carol” (Scrooge) (The 1951 version starring Alastair Sim as Ebenezer Scrooge is my favorite version.)

“How The Grinch Stole Christmas”

“Santa Claus is Comin’ to Town”

There are literally hundreds of other Christmas traditions around the US and around the world.  If you have any you’d like to share, please click on “Contact” at the top of my blog and leave me a message.

Here are some fun facts about Christmas:

The first eggnog made in the United States was consumed in Captain John Smith’s 1607 Jamestown settlement.

Poinsettia plants are named after Joel R. Poinsett, an American minister to Mexico, who brought the red-and-green plant from Mexico to America in 1828.

The Salvation Army has been sending Santa Claus-clad donation collectors into the streets since the 1890s.

Rudolph, “the most famous reindeer of all,” was the product of Robert L. May’s imagination in 1939.  The copywriter wrote a poem about the reindeer to help lure customers into the Montgomery Ward department store.

Construction workers started the Rockefeller Center “lighting of the Christmas tree” tradition in 1931.

Scrooge does not celebrate with the Cratchits. While most cinema versions of “A Christmas Carol” show the reformed miser celebrating with his lower-class employee, in the book, Scrooge celebrates instead with his middle-class nephew.

It’s a tradition in Japan to eat Kentucky Fried Chicken for Christmas.  Orders must be placed over two months in advance to guarantee you’ll be “doing your chicken right!”

Paul McCartney earns over $400,000 a year from his “Wonderful Christmastime” song, which he regards as the worst song he ever recorded.

It only took Charles Dickens six weeks to write “A Christmas Carol.”

My Christmas 101 class is now dismissed!

Please have a very Merry Christmas and a wonderful New Year!!!

Thank you to the editors at History.com for their contributions to this article. 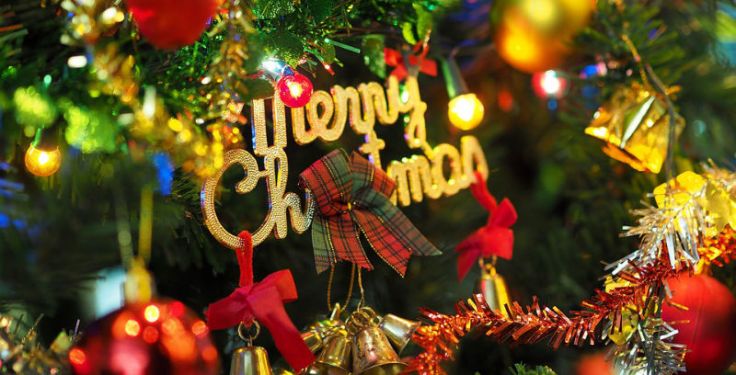