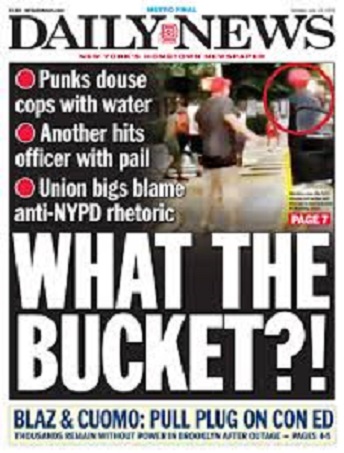 After watching the video of these poor officers being humiliated, as they were just doing their job, brings a few words to mind:

Are you getting the impression I feel these (I’m not even going to go as far as to call them “people”) animals should be euthanized?

Good…, then I’m getting my point across clearly.

If you haven’t seen the video, what we have here is two New York Police Department (NYPD) officers making an arrest of an individual in the area known as Harlem in New York City.

In the process of doing their job, they are continuously splashed with water by onlookers, until finally one sub-human actually dumps a whole bucket of water over the head of one of the officers.  The other officer gets water thrown at him with a bucket and then the bucket is thrown at the officer, striking him in the head. 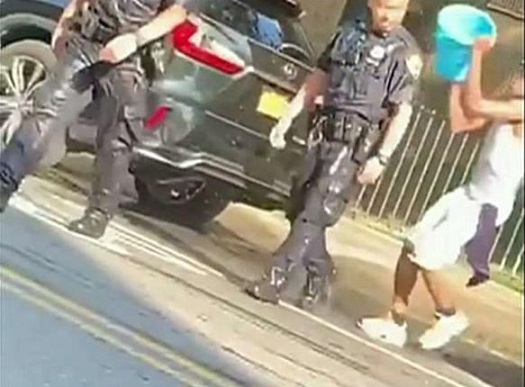 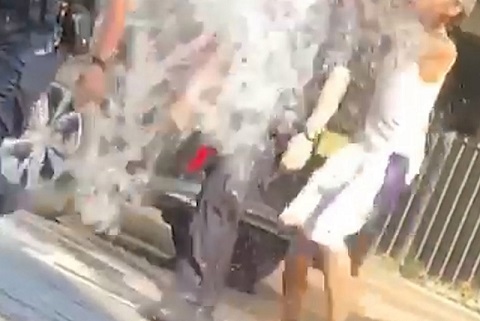 I’m not sure where these officers found the self-control to seemingly ignore and just walk away from this situation…, but they are bigger men than me apparently.

I know these officers have some level of pride and honor, however, and you can’t expect these individuals to put up with this type of absolute humiliation and utter disrespect for long.

According to Thomas Tracey, Rocco Parascandola and John Annese of The New York Daily News, ‘“If these kids [the ones throwing the water, and I’m not sure I’d call them “kids’] were injured when they were being arrested, then (Internal Affairs) would have to be involved,’ an NYPD lieutenant said. ‘They probably weighed the risk and thought it was too much.’”

In other words, the cops don’t feel that the department or city hall has their backs.

‘“But my dad was a cop, and in my father’s day all of these guys would have been in the hospital,’ the lieutenant said. ‘The job’s got these cops scared to take action.’”

How long are people going to be willing to do this job?

Have these liberal politicians turned this into a job that just can’t be done?

How much money do you have to earn to warrant putting up with crap from both sides…, the criminals and the liberal politicians?

And don’t think there isn’t a racial aspect to this as well.

These African-Americans would not have dumped water over a Black officer’s head.

Again…, these African-Americans WOULD NOT have dumped water over a Black officer’s head.

If anyone out there disagrees with that statement, then please, I’d like to hear from you.  Please message me and convince otherwise.

It really hurts me to even use the word “American” in the same breath when referring to these missing links.

“America,” as we know it, is quickly becoming divided between the big cities and the rest of us. 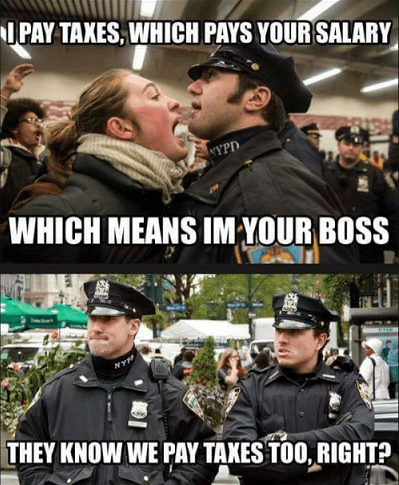 When the rest of us see things like this incident, we just can’t believe our eyes.

We wonder “who are these ‘people,’” and where did they come from? 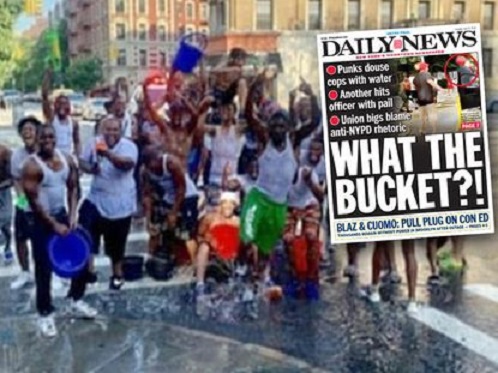 This type of disrespect towards officers of the law is just inconceivable to the rest of the country.

Liberals are quick to label these types of feelings as racist…, but they’re honestly not…, these are reactions to actions and behaviors…, not skin color.

One thought on “The treatment these New York Police Officers were forced to endure is absolutely sickening.”