“The former first lady made the remarks at the Obama Foundation Summit, held at the Illinois Institute of Technology in Chicago.”

Excuse me, but did you have to wear a bulletproof suit to and from the institute, Michelle?

I mean with all of the gun violence in your home city of Chicago there, and all.

“In a sit-down interview with journalist Isabel Wilkerson, in which Obama was accompanied by her brother, Craig Robinson, an executive with the NBA’s New York Knicks, Obama described when she first became conscious of what’s been called ‘white flight.’”

‘“We were doing everything we were supposed to do – and better,’ Obama said of her family, recalling when they got a new address on Chicago’s South Side. ‘But when we moved in, white families moved out.’”

A bit of an exaggeration, I’m sure.

And “doing everything we were supposed to do” according to who?

What are you talking about?

‘“I want to remind white folks that y’all were running from us,’ she continued, according to the Chicago Sun-Times. ‘And you’re still running.’”

Uh…, not racist at all are we, Michelle?

So all 230 million of us “whiteys” all act the same and can be lumped into one group?

“Discrimination took another form as she advanced in her academic career, said the 55-year-old Obama, a best-selling author with degrees from Princeton and Harvard, adding she did her best to move forward and achieve despite the mistreatment.”

‘“As people doubted us coming through — ‘Are you Princeton material? Can you really make the grade? Can you cut it? — What do you do in those instances?’ Obama asked, according to The Hill. ‘All you can do is put your head down and do the work and let the work, your truth, speak for itself.’” 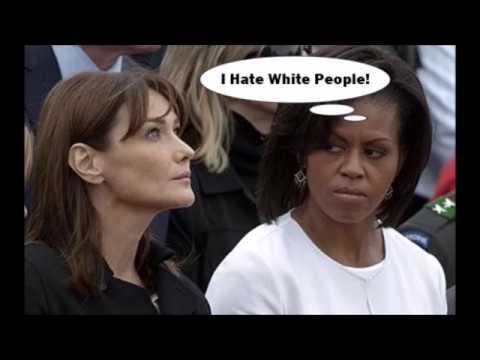 Uh…, hello, Michelle.  I’m getting the impression that you think white people receive some kind of automatic diploma from Princeton or Harvard.  That white people don’t have doubts about whether they’re good enough, and that they don’t have to work hard to achieve anything.

You can’t possibly be that stupid, Michelle, can you?

Is this what a degree from Princeton and Harvard gets you?

“[Michelle] Obama added that she is mystified by the concept of discrimination.”

‘“I can’t make people not afraid of black people,’ she said, according to The Hill. ‘I don’t know what’s going on.  I can’t explain what’s happening in your head.’”

Ok…, again, Michelle…, not all Black people are created equally.

White people, Hispanic people and Asian people are not afraid of “Black” people.

They’re afraid of any color person who walks around with a gun shooting other people.

They’re afraid of any color person who walks around acting uncivilized.

They’re afraid of any color person who walks around in gangs.

They’re afraid of any color person who walks around dealing deadly drugs to their children.

They’re afraid of any color person who walks around with no common courtesy for other people.

Are there some white people out there who are racist and just don’t like Black people because they’re black?

Just like there are some Black people out there who are racist and just don’t like white people because they’re white.

Well, these words are coming out of your mouth, aren’t they, Michelle? 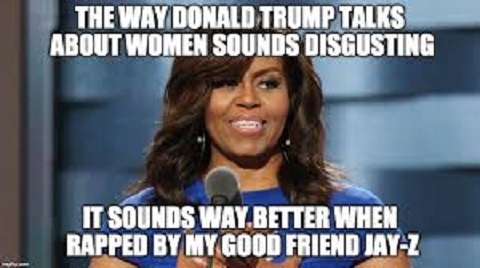 ‘“But maybe if I show up every day as a human, a good human, doing wonderful things, loving my family, loving our kids, taking care of things that I care about — maybe, just maybe that work will pick away at the scabs of our discrimination.  Maybe that will slowly unravel it.’”