This phrase is from a 1940 Looney Tunes/Merrie Melodies short film titled “Of Fox and Hounds.”

The cartoon focuses on a sly fox, George, and a lovable but dimwitted hound, Willoughby, who repeatedly asks George where the fox went, never suspecting that his “friend” George is the fox.

According to Julia Marsh and Jorge Fitz-Gibbon of The New York Post, “It is ‘unconscionable’ that Rikers Island inmates who were released due to coronavirus concerns are committing new crimes, Mayor Bill de Blasio said Monday.”

For my purposes here, De Blasio would be Willoughby, the lovable but dimwitted hound, minus the lovable part, and the released inmates would be represented by, George, the sly fox.

‘“I think it’s unconscionable just on a human level that folks were shown mercy and this is what some of them have done,’ the mayor said during his morning briefing Monday, which came on the heels of a Post report outlining the issue.”

This article tells you all you need to know about the naive and clueless liberal mindset.

“De Blasio said the number of re-offenders remains relatively small and that the city was ‘buckling down’ on monitoring and supervising released prisoners.”

Everything else over zero is on you at this point.

‘“We’re going to just keep buckling down on it, making sure there’s close monitoring and supervision to the maximum step possible. And the NYPD is going to keep doing what they’re doing,’” de Blasio added.

Just for the record, “More than 1,400 city inmates have been granted early releases due to concerns about the spread of coronavirus.”

The Post reported Sunday that, “At least 50 of the newly released Rikers Island prisoners were rearrested for new crimes in recent weeks — and in some cases were cut loose again.”

The level of irresponsibility and idiocy displayed here, by de Blasio and other New York City officials, is truly impressive! 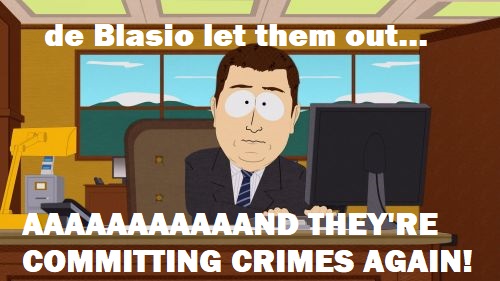 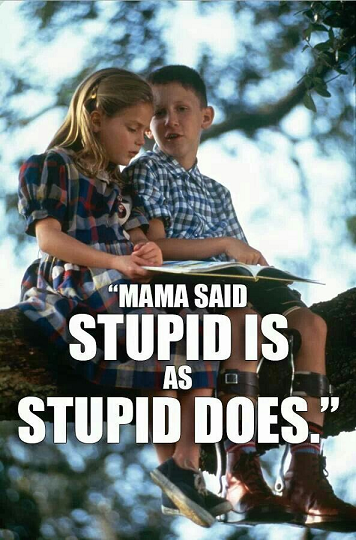 “The Legal Aid Society, Bronx Defenders and other legal defense groups have been petitioning courts since the outbreak of the deadly global pandemic, arguing that inmates, particularly those who are older or have medical conditions, are more vulnerable to the deadly bug within the confines of city jails.”

What “defense groups” are petitioning the courts regarding the vulnerability of law-abiding citizens who will now be forced to deal with over a thousand convicted criminals being released into their midst?

The survivability rate for the coronavirus is 98.5%

The “survivability” rate of being affected by these criminals committing another crime is only 96.5%.

And the Mayor’s “virus of ignorance” is completely preventable!