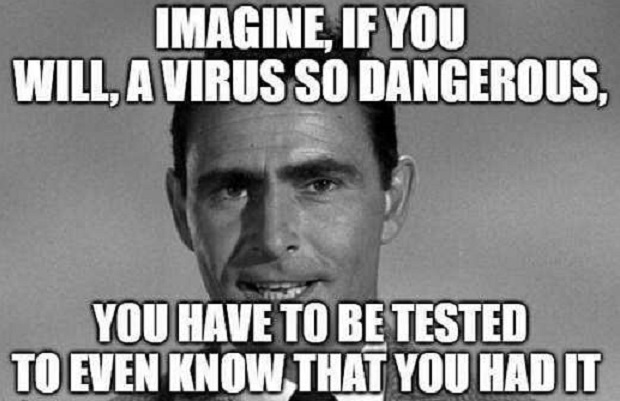 What the heck is “The Great Barrington Declaration?”

First of all, I have to give my wife credit for bring it to my attention.

That being said, if you’re not already aware of what “The Declaration” is, and I’m guessing most people aren’t familiar with it, once you do learn what it is, you’ll see why the fake news, liberal propaganda media has not been eager to say much about it.

According to Joe Allen for TheFederalist.com, “The Great Barrington Declaration is a spark of sanity in a mad world.”

“The Great Barrington Declaration offers a way forward, but do most Americans have the courage to risk their sense of security to maintain enduring liberty?”

Oh boy…, that really dated myself!

Irregardless, I believe the answer to this question has been “yes” way more often than not.

“In an era in which every dubious decision is ‘due to COVID-19,’ we hear policymakers repeating the same mantra: ‘If just one life is saved,’ it’s worth relinquishing our freedoms, our sanity, and possibly our future. More often than not, this ethical dilemma is presented without mentioning the obvious trade-offs or long-term consequences.”

“Imagine you’re an administrative dictator. If you could ‘save just one life’ — or even thousands — by crippling the youth, vaporizing a million careers, wiping out small businesses, crushing your nation’s civic culture, severing the ancient continuity of religious rites, forcing healthy people into paranoid isolation, traumatizing an entire generation with viral terror, ending hugs and handshakes, depriving the elderly of intimate care in their final days, wrecking the national economy, unleashing a dystopian surveillance state, and turning your neighbors into neurotic germaphobes, would it be worth it?”

Not to mention the biggest benefit to liberals…, the ability to attack President Trump on his record.  This single benefit makes all of that collateral damage overwhelmingly acceptable.

Anyway, “It’s a serious question. What if that ‘one life’ was your grandpa?”

“If my own grandfather had lived to see the destructive madness surrounding the Wuhan virus crisis, he’d no doubt light-up a Doral 100 and say, ‘Good Lord, just let me die!’”

In my Grandpa’s case, it would have been a Lucky Strike!

Joe Allen continues, “As it happens, I was in Great Barrington, Massachusetts, when this germ hysteria got started. As things progressed, the sleepy ski town was suddenly overrun by panicked New Yorkers who escaped to their summer cottages and never went back. Being typical urban scolds, they’d show up at the local shops and shriek about other customers not wearing masks or small children standing too close to them. The locals accused these uptight yuppies of carrying the city’s plague to the countryside.”

“In this idyllic setting of cultural neurosis and mutual disdain, the now-infamous Great Barrington Declaration was drafted by three leading experts in the fields of biostatistics, immunology, and public health policy. These doctors advocate for a return to traditional wisdom: Quarantine the sick, isolate the vulnerable, and allow the young and healthy to proceed with caution. Alongside Sweden’s courageous example, the document will go down in history as a bold assertion of vitality in a withering world.”

“The declaration was authored and signed on Oct. 4 by Dr. Martin Kulldorff, professor of medicine at Harvard; Dr. Sunetra Gupta, a distinguished Oxford epidemiologist; and Dr. Jay Bhattacharya of Stanford University Medical School. To date, more than 13,000 medical professionals have added their signatures, along with more than 176,000 members of the public, with thousands more every hour. This concise manifesto is strong medicine for a sick society.”

Even The World Health Organization (WHO) has recently issued a statement that basically echoes the feelings of the Barrington Declaration.

And as I stated, it’s obvious why the fake news, liberal propaganda media has chosen to ignore The Declaration.

The Great Barrington Declaration states, “As infectious disease epidemiologists and public health scientists we have grave concerns about the damaging physical and mental health impacts of the prevailing COVID-19 policies, and recommend an approach we call Focused Protection.”

“Fortunately, our understanding of the virus is growing. We know that vulnerability to death from COVID-19 is more than a thousand-fold higher in the old and infirm than the young. Indeed, for children, COVID-19 is less dangerous than many other harms, including influenza.”

“The authors call for an end to blanket, one-size-fits-all restrictions.”

The Declaration goes on to say, “Current lockdown policies are producing devastating effects on short and long-term public health … leading to greater excess mortality in years to come, with the working class and younger members of society carrying the heaviest burden. Keeping students out of school is a grave injustice.”

“Keeping these measures in place until a vaccine is available will cause irreparable damage, with the underprivileged disproportionately harmed.”

“Let’s pause to consider all the white-collar office jockeys, tenured college professors, and coddled trust fund babies who snuggled up on cushy sofas, glued themselves to laptops, and dismissed the protests of those who were laid off, locked down, and muzzled against their will. ‘What’s so hard about wearing a mask?’ they’d scoff, despite the evidence that, all factors considered, healthy people have little reason to do so. ‘Stay home and stay safe!’ they yelped, before moving on to the next Amazon 1-Click order.”

“The most compassionate approach that balances the risks and benefits of reaching herd immunity, is to allow those who are at minimal risk of death to live their lives normally to build up immunity to the virus through natural infection, while better protecting those who are at highest risk. We call this Focused Protection.”

“Those who are not vulnerable should immediately be allowed to resume life as normal. … Schools and universities should be open for in-person teaching. … Young low-risk adults should work normally, rather than from home. … People who are more at risk may participate if they wish, while society as a whole enjoys the protection conferred upon the vulnerable by those who have built up herd immunity.”

“That sounds far more reasonable than California Gov. Gavin Newsom urging diners to pull down their masks to take bites and pull them back up to chew, but of course, no plan is foolproof.”

“Microbiologist Simon Clarke voiced one of the stronger arguments against the declaration, warning that the quest for herd immunity is plagued with uncertainty. He rightly noted that we don’t know how long immunity to the coronavirus actually lasts. We also don’t know what the long-term damage might be, even to healthy people, and it’s questionable whether it’s ethical to segregate those deemed ‘vulnerable’ from germ-ridden public spaces.”

“Fair enough, but how is it more ethical to straitjacket the entire culture, indefinitely, for the sake of a vulnerable minority’s already-limited freedom?”

“If fear of the unknown drives the skepticism toward herd immunity, explain to me how it’s acceptable for our leaders to implement six months of bizarre social experimentation fraught with unintended consequences. So far, they’ve employed forced isolation, mask mandates, vicious social shaming, and media-induced germaphobia. This approach has no Western precedent, except perhaps medieval superstition, and its proponents offer no feasible projections of holistic outcomes beyond hypothetical ‘saved lives.’”

“If one principle has remained constant during this crisis, it’s that the numbers frequently follow the politics, rather than the reverse. For instance, back in August, Biden began pushing for a nationwide mask mandate, insisting it would save 40,000 lives. Come September, Biden’s scientific sources had upped that number to a whopping 100,000 lives.”

“At this rate, by Election Day, a draconian mask mandate will save more than a million lives. Who knows? Maybe if we cover with burkas made out of personal protective equipment until the inauguration, God will withhold his eternal wrath, and no one will ever die again.”

“Our newly minted social engineers are absolutely obsessed with ‘the numbers.’ These insidious numbers are always rising, or about to rise, or once rising and sure to rise again, but how do our esteemed experts quantify a loss of dignity? How do they calculate the degradation of social health? How do they weigh hypothetical saved lives against the observable lost souls?”

It has been estimated that the actual number of deaths that can be solely attributed to the China virus is more like 10,000-20,000…, not the over 200,000 number which is continually thrown at us.

In fact, many of these “COVID deaths” are not even validated by actual testing, but are included based on assumptions.  Not very scientific, for people who are constantly demanding we “should follow the science.”

Allen finishes by saying, “Perhaps these people have nothing to lose. For those of us who do, a cautious but deliberate path toward herd immunity offers a sane alternative to perpetual neurotic terror. The question is whether most Americans have the will and the courage to risk their sense of security to maintain enduring liberty.”

If you’re not already “following” me and you liked my blog(s) today, please let me know by “clicking” on the comment icon just to the right of the date at the bottom of this article.  From there you can let me know if you “like” my blog, leave a comment or click the white “FOLLOW” button at the bottom of that page, which will keep you up to date on all of my latest posts.