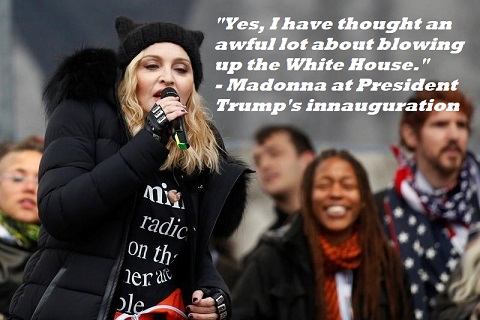 You can only wonder what the reaction would be if a conservative celebrity would say the same thing Madonna said during the Trump inauguration at the Biden inauguration.

According to Amir Vera and Dakin Andone, of CNN, “DC is like a combat zone.”

“The Pentagon has authorized up to 25,000 National Guard troops for Inauguration Day — an unusually large number, according to retired Army Lt. Gen. Mark Hertling, a CNN military analyst.”

“The deployment of 25,000 troops is about twice the number of National Guard members normally involved in the inauguration, Hertling said.”

“It certainly is somewhat like a combat zone,” he said.

“Many of the capital’s monuments and buildings are inaccessible, including the National Mall, which will be closed through at least Thursday. The iconic lawn stretching from the Capitol to the White House, typically a viewing area for presidential inaugurations, was deserted Sunday — something National Park Service spokesman Mike Litterst told CNN was ‘unprecedented, almost surreal.’”

“Surreal” is a good word to describe the 2020 election and the entire installment of a truly illegitimate president.

‘“But it is being done,’ he said, ‘to guarantee that the constitutional mandate of a peaceful transfer of power on January 20 takes place.’”

Yes…, it is being done, in order to shove the Biden presidency down our throats, no matter what the cost.

‘“It’s pretty clear that the (US) Capitol itself is locked down about as tight as humanly possible,’ former FBI Deputy Director Andrew McCabe said Sunday, adding it was hard to imagine a reprise of the Capitol riots taking place there in the next several days, given the security measures in place.”

No…, we clearly don’t want “a reprise of the capitol riots taking place.”

But, how about a reprise of the riots that took place during the Trump inauguration?

Would that be acceptable?

Let’s recall that NONE of the democrats, nor the mainstream media, seemed to have a problem with the protests and the riots during the Trump inauguration.

Let’s take a look at some of the scenes from the 2017 inauguration, just in case you forgot.

Now take a guess at how many of these rioters from 2017 were hunted down by the FBI and charged with sedition, insurrection, domestic terrorism, or any federal crime, like the capitol rioters were?

Uh…, that would be a big ZERO.

Now take a guess at how many of these rioters and protesters from 2017 were villified by the liberal propaganda, mainstream media, like the capitol rioters were?

As we have learned, democrat hypocrisy knows NO bounds and it makes no apologies.