The article is by Erik Wemple, a media critic for The Washington Post, whose tag line is “Democracy dies in darkness.”

It must be getting pretty “dark” over there at the old Washington Post.

In the article, Mr. Wemple whines about the White House Press Secretary, Sarah Sanders, not having had a traditional White House briefing in quite a while.

Do you really wonder why that is Mr. Wemple, or are you just pretending not to know?

Well…, in case it is the former, I’ll clue you in.

First of all, it’s not written anywhere that these press briefings have to occur at all.

Second, most of the media that attended these briefings were not interested in getting briefed.  They were only interested in attacking President Trump, his administration, and Sarah Sanders.

Is it any wonder this is one tradition The President isn’t too concerned about honoring?

Mr. Wemple then continues to whine that Sarah Sanders seems to prefer to discuss her talking points with more “sympathetic” Fox News interviewers. 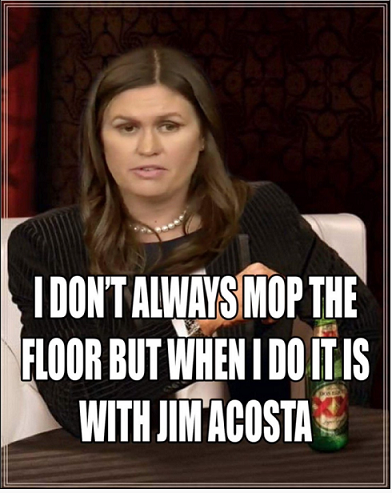 I don’t think “Sympathetic” is quite the right word here.  I think I would go with the term “fair and balanced.”

It wasn’t too long ago that I can remember Obama’s press secretaries avoiding the reporters from Fox News as opposed to any of the remaining horde of truly “sympathetic,” liberal propaganda reporters.

I can also recall the Obama administration actually spying on reporters who didn’t play by his “swampy” rules…, but I digress.

Mr. Wemple then proceeds to dredge up the tired “obstruction of justice” topic…, again…, claiming, “The Mueller report documented close to a dozen instances of possible obstruction of justice by President Trump,” while claiming Mueller “did not charge any crimes in deference to Justice Department policy toward sitting presidents.”

If I’ve said this once I’ve said this a hundred times…, IF ROBERT MUELLER COULD HAVE CHARGED PRESIDENT TRUMP WITH A-N-Y-T-H-I-N-G…, BELIEVE ME, HE WOULD HAVE.

IF ROBERT MUELLER COULD HAVE RECOMMENDED CHARGING PRESIDENT TRUMP WITH A-N-Y-T-H-I-N-G…, BELIEVE ME, HE WOULD HAVE.

Mr. Wemple then continues to cry about Sarah Sanders “hitting back” at charges made by various democrats, and actually defending The President and his administration.

You do understand that is precisely what her job is don’t you Mr. Wemple?

He then refers to a tweet by Alec Baldwin (that wise old sage and ever on duty guardian of democracy…, cough, cough), where he referred to Sarah Sanders as a “mouthpiece-for-fascism…,” a claim Mr. Wemple obviously supports.

Ok…, let’s talk about fascism and fascists a little bit.

Have you heard of The Poynter Institute, Mr. Wemple?  I’m sure you have, but most other people haven’t.  It’s kind of a well-kept and camouflaged secret.  In a nutshell, The Poynter Institute is a boot camp for liberal, socialist, fascist, “journalists.”  It’s the kind of “journalism” school that Joseph Goebbels, the Nazi Minister of Propaganda, could really appreciate, and a school that is well represented by many members of the “biased, liberal propaganda, fake news media” who make Washington D.C. their home.

Oh…, and by the way…, was it Sarah Sanders who was pushing the false narrative of Russian collusion for the last 2 years, or was it the “liberal propaganda,” “mainstream” media?

Who again are the fascists attempting to control the media?

In addition…, who in “the media” are the ones accounting for over 90% negative articles concerning President Trump?  If you take out the positive stories (or at least the non-negative ones) by Fox News, that means the rest of “the media” is basically 100% negative 100% of the time.  And saying that doesn’t even cause me to flinch.

Who again are the fascists attempting to control the narrative through negative propaganda and by omission?

The “mainstream” media being anywhere close to fair and balanced is the problem here, not Sarah Sanders.

“I found some steel slats down on the border. But I don’t see anything resembling a national emergency situation.. at least not in the McAllen TX area of the border where Trump will be today. pic.twitter.com/KRoLdszLUu”

Ian Schwartz of RealClear Politics reported that, “White House officials and Trump supporters on Twitter roundly mocked CNN White House reporter Jim Acosta after he filmed himself taking a walk along a border barrier he called “tranquil” and claiming there was “no national emergency.”

“Here’s some of the steel slats that the president has been talking about,” Acosta said as he grabbed a bar. “As you can see, yes, you can see through these slats to the other side of the U.S.-Mexico border.”

“But as I am walking along here we’re not seeing any kind of imminent danger,” Acosta reported as he walked against the barrier. “There are no migrants trying to rush toward this fence here in the McAllen, Texas area.”

“As a matter of fact, there are some other businesses behind me along this highway. There’s a gas station, a Burger King and so on,” the intrepid reporter said into the camera.

“No sign of the national emergency that the president has been talking about. As a matter of fact, it’s pretty tranquil down here.”

Acosta then ended his transmission.

Not only is Jim Acosta obnoxious, he’s an obnoxious idiot.

Actually, it turns out that he is an obnoxious, useful, idiot!

And that’s the best kind!

I’m sure Mr. Acosta is kicking himself for unwittingly making the President’s point for him.

Let’s see what some others had to say about Jim “I Tawt I Taw a Puddy Tat” Acosta!

“When I went with President @realDonaldTrump to the border today I never imagined @Acosta would be there doing our job for us and so clearly explaining why WALLS WORK. Thanks Jim! https://t.co/7wC4rdEsZ2”

“I would like to thank @Acosta for pointing out how peaceful, safe and secure it is at a part of the border that HAS a wall. #RealNews #BuildTheWall  https://t.co/bkssL9nOW3”

“A sincere and heartfelt “thank you” to @Acosta and @CNN for finally showing what @POTUS has been saying: barriers work! Great job Jim!!! https://t.co/jZx1NanMgh”

“Is it possible Acosta is actually a pro-Trump false flag operating under deep cover in the media? If so, he’s a genius. https://t.co/EvRYGrIQZI”

Thank you for your unwitting support.

After an unprofessional performance at a White House press conference earlier this week, CNN’s Chief White House Correspondent, Jim Acosta, has been denied access to The White House “until further notice.”

“I’ve just been denied entrance to the WH,” Acosta cried via a tweet Wednesday night. “Secret Service just informed me I cannot enter the WH grounds…”

White House Press Secretary Sarah Sanders confirmed Acosta’s tweet in a later statement, claiming the suspension of his press credentials stemmed from his “placing his hands on a young woman just trying to do her job as a White House intern.” She called the behavior “absolutely unacceptable.”

Is Jim Acosta related to Bill Clinton in any way?  Just wondering.

The CNN reporter, during a news conference at the White House earlier Wednesday, got into a heated debate with Trump after he asked the president about the migrant caravan. “Honestly, I think you should let me run the country and you run CNN,” the president said.

Acosta tried to ask the President another question before a female White House aide walked over to him.

Acosta continued to try to talk as the intern was seen trying to take the microphone from his hand.  She grabbed the microphone but Acosta wouldn’t give it up and there was contact between the two and he actually chopped down on her arm.  If you get a chance to actually watch the video, I’m sure you’ll agree that it is quite obvious.

I’m sorry Jim, the “fake news” may try and convince us we’re not seeing what we’re seeing, but we did see it, and it is what it is.

In a later statement, Sanders said, “President Trump believes in a free press and expects and welcomes tough questions of him and his Administration.”

“Contrary to CNN’s assertions,” Sanders continued, “there is no greater demonstration of the President’s support for a free press than the event he held today.  Only they would attack the President for not being supportive of a free press in the midst of him taking 68 questions from 35 different reporters over the course of an hour and a half, including several from the reporter in question.”

“The fact that CNN is proud of the way their employee behaved is not only disgusting, it is an example of their outrageous disregard for everyone, including young women, who work in this Administration,” Sanders added.

Of course he has their support, he’s their poster boy for obnoxious and biased “reporting.”

The White House Correspondents’ Association in a statement called the move “unacceptable,” and urged the White House to “immediately reverse this weak and misguided action.”

Isn’t the White House Correspondents’ Association the same group that hires lame, supposed, comedians to bash President Trump at their pretentious little annual get together to pat each other on the back?  Why yes it is.  That would explain their “weak and misguided” response!

“Rudeness is the weak man’s imitation of strength.” – Edmund Burke

“Ideological differences are no excuse for rudeness.” – Judith S. Martin

“A polite enemy is just as difficult to discredit, as a rude friend is to protect.” – Bryant McGill

If we look back at the eight years of the Obama administration, reporters would never dream of taking the tone with him like they do with you.  In addition, The Obama era press secretaries were Robert Gibbs, Jay Carney and Josh Earnest.  None of them were forced to take the abuse and disrespect that Sarah Sanders has had to endure on a daily basis.

In fact, during the Obama years, the only reporters who ever asked President Obama or his Press Secretary a remotely challenging question were Major Garrett and Ed Henry, of Fox News, and even then the questions were asked in a respectful manner.

The White House intern who attempted to take the microphone from Acosta eventually handed it off to Peter Alexander, of NBC News.  He called Acosta a “diligent reporter who busts his butt,” to which Trump shot back: “Well, I’m not a big fan of yours either, to be honest.”

I’m a big fan of yours though!