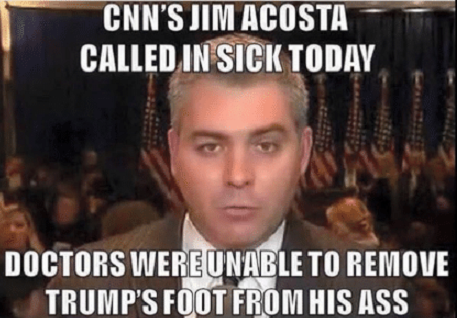 After an unprofessional performance at a White House press conference earlier this week, CNN’s Chief White House Correspondent, Jim Acosta, has been denied access to The White House “until further notice.”

“I’ve just been denied entrance to the WH,” Acosta cried via a tweet Wednesday night. “Secret Service just informed me I cannot enter the WH grounds…”

White House Press Secretary Sarah Sanders confirmed Acosta’s tweet in a later statement, claiming the suspension of his press credentials stemmed from his “placing his hands on a young woman just trying to do her job as a White House intern.” She called the behavior “absolutely unacceptable.”

Is Jim Acosta related to Bill Clinton in any way?  Just wondering.

The CNN reporter, during a news conference at the White House earlier Wednesday, got into a heated debate with Trump after he asked the president about the migrant caravan. “Honestly, I think you should let me run the country and you run CNN,” the president said.

Acosta tried to ask the President another question before a female White House aide walked over to him.

Acosta continued to try to talk as the intern was seen trying to take the microphone from his hand.  She grabbed the microphone but Acosta wouldn’t give it up and there was contact between the two and he actually chopped down on her arm.  If you get a chance to actually watch the video, I’m sure you’ll agree that it is quite obvious.

I’m sorry Jim, the “fake news” may try and convince us we’re not seeing what we’re seeing, but we did see it, and it is what it is.

In a later statement, Sanders said, “President Trump believes in a free press and expects and welcomes tough questions of him and his Administration.”

“Contrary to CNN’s assertions,” Sanders continued, “there is no greater demonstration of the President’s support for a free press than the event he held today.  Only they would attack the President for not being supportive of a free press in the midst of him taking 68 questions from 35 different reporters over the course of an hour and a half, including several from the reporter in question.”

“The fact that CNN is proud of the way their employee behaved is not only disgusting, it is an example of their outrageous disregard for everyone, including young women, who work in this Administration,” Sanders added.

Of course he has their support, he’s their poster boy for obnoxious and biased “reporting.”

The White House Correspondents’ Association in a statement called the move “unacceptable,” and urged the White House to “immediately reverse this weak and misguided action.”

Isn’t the White House Correspondents’ Association the same group that hires lame, supposed, comedians to bash President Trump at their pretentious little annual get together to pat each other on the back?  Why yes it is.  That would explain their “weak and misguided” response!

“Rudeness is the weak man’s imitation of strength.” – Edmund Burke

“Ideological differences are no excuse for rudeness.” – Judith S. Martin

“A polite enemy is just as difficult to discredit, as a rude friend is to protect.” – Bryant McGill

If we look back at the eight years of the Obama administration, reporters would never dream of taking the tone with him like they do with you.  In addition, The Obama era press secretaries were Robert Gibbs, Jay Carney and Josh Earnest.  None of them were forced to take the abuse and disrespect that Sarah Sanders has had to endure on a daily basis.

In fact, during the Obama years, the only reporters who ever asked President Obama or his Press Secretary a remotely challenging question were Major Garrett and Ed Henry, of Fox News, and even then the questions were asked in a respectful manner.

The White House intern who attempted to take the microphone from Acosta eventually handed it off to Peter Alexander, of NBC News.  He called Acosta a “diligent reporter who busts his butt,” to which Trump shot back: “Well, I’m not a big fan of yours either, to be honest.”

I’m a big fan of yours though!

One thought on “Where are your manners Jim Acosta?  Who do you think you are?   ”