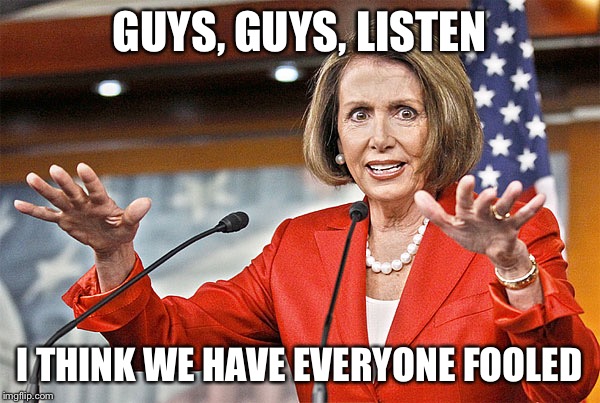 After the votes were held in the House and the Senate this week, and the smoke cleared, NOT ONE democrat or “independent” voted along with the republicans. That’s right.  Out of the 193 representatives and the 48 senators that aren’t republicans, ZERO broke the democrat ranks.  ZERO out of 241 possible votes.  NOT ONE democrat had the wherewithal, independence or bravery to think for themselves.  What are they so afraid of?  You do have to be impressed with Chucky’s and Nancy’s ability to keep their “sheep” in check though, as sad as it is.

What is it about the tax reform bill that scares the democrats so much?

Is it the potential of bringing companies and jobs back home to the U.S., by way of the  reduction in the corporate tax rate, from 35%, the highest in the developed world, down to 21%? You can’t find many mainstream economists that disagree that America’s corporate tax rate is too high. In fact, in 2012, President Obama proposed slashing it to 28%. Even at 21%, were still above the European average of around 19%.

Is it the FACT that the plan cuts tax rates across ALL seven tax brackets?

Is it the FACT that this plan DOUBLES the standard deduction, EXPANDS the child tax credit, and alters the alternative minimum tax so that it will affect fewer people? According to an analysis by the Tax Policy Center, THESE CHANGES WOULD REDUCE TAXES FOR EVERY INCOME GROUP.

Is it because this bill also repeals the individual mandate to maintain health coverage that was part of the (un)Affordable Care Act? Democrats argue that millions of Americans will lose health coverage.  That’s not true.  They may choose to opt out of ObamaCare, but they are not forced to.  This will also save millions of middle class families either the $2,400 penalty, or even higher premiums for policies they can’t even afford to use with deductibles of $5,000, $6,000 and even $7,000 or more.

Is it because this bill gives the “fly-over” states, between the coasts, relief from having to subsidize all of the high property taxes imposed by our liberal friends in California and New York? They may be, and should be, scared of this, but hey, fair is fair.

Is it because the tax cuts will continue to feed the fire of the economy, raising tax revenues and growing our GDP? Those arguing against these results ignore a history that shows this is what happens every time taxes are cut. Look at the optimism generated in our economy and by businesses at just the possibility tax reform like this. It seems like the stock market sets a new record high on almost a daily basis, based only on speculation and the hope of things to come.  Imagine how the market and the economy will react to real tax reform?

When you know the facts, you have to ask yourself the question, “Whose side are the democrats on anyways, and why?”

“We the People” don’t need anyone to tell us that keeping more of our own money is a good thing.

“We the People” don’t need anyone to tell us that bringing companies and jobs back to America is a good thing.

“We the People” don’t need any idiot(s) telling us that “the sky is falling,” when we can plainly see that it’s not.