Congresspeople in The House of Representatives are up for re-election every two years.  This is a good thing in a way, but also a bad thing in a way.  It’s good that they are being held accountable for their action over a short time frame, but it is also bad, because they are afraid to deal with long term issues that might cost them getting re-elected.  It is for this reason that I believe “We the People” need to take some of these long term issues into our own hands for the good of the country.  So, how to we do that?  Well, the authors of our Constitution had the foresight to build an option in that would allow us to do just that.

From the Constitution of the United States of America:

“The Congress, whenever two thirds of both houses shall deem it necessary, shall propose amendments to this Constitution, or, on the application of the legislatures of two thirds of the several states, shall call a convention for proposing amendments, which, in either case, shall be valid to all intents and purposes, as part of this Constitution, when ratified by the legislatures of three fourths of the several states, or by conventions in three fourths thereof, as the one or the other mode of ratification may be proposed by the Congress; provided that no amendment which may be made prior to the year one thousand eight hundred and eight shall in any manner affect the first and fourth clauses in the ninth section of the first article; and that no state, without its consent, shall be deprived of its equal suffrage in the Senate.”

Thirty-three amendments to the United States Constitution have been approved by Congress and sent to the states for ratification. Twenty-seven of these amendments have been ratified and are now part of the Constitution.

As of 2018, the convention process has never been used for proposing constitutional amendments.

Since there are currently 34 “red states,” it would seem that the calling of a constitutional convention could really happen.

The challenge would be to get the 38 states needed to actually change the constitution. Four additional “purple” or “blue” states would have to “sign on” to whatever amendments to the Constitution the convention of states arrived at.

There have been calls for an “Article V Convention” to deal with the issues that Congress seems to be afraid to address. Some of these issues are:

Limiting the powers of the Federal Government

Term limits for members of Congress

Keep in mind that the states do not have to ratify the amendment all at once, or in a rush. The 27th amendment, which prevents members of Congress from raising their salaries, was proposed in 1789; it did not get its 38th ratification until 1992! Unless the proposers put a time limit on their amendment’s ratification, as has been the case for most 20th-century amendments, it can sit around accumulating ratifications in perpetuity. As the founders intended, the federal government should have no way to block the process.

And then there is the “nuclear” option. Once a constitutional convention was convened, theoretically, delegates could simply declare a new, lower threshold for ratification.  “The sovereign people have the right to alter or abolish their form of government and change it to whatever they want,” says Larry Greenley of the John Birch Society. “This is a convention that creates constitutions. It’s a level above state legislatures, and can’t be limited. We really believe that any Article V convention would have the ability to change the ratification process.”

I’m sure the federal government (“the swamp”) will challenge the states’ rights to do anything every step of the way, but hopefully this won’t deter the states. We need someone, or some group, to take the lead on this for the long haul.

This may be the only way to deal with the tough issues and save America from its own irresponsible federal government. 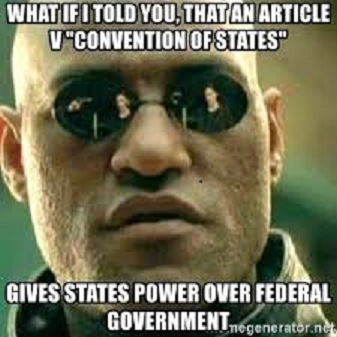 One thought on “How “We the People” can bypass the partisan and “do nothing” Congress, and do what’s best for America.”