Here are my top 35 favorite movies of all-time!

Brainstorm – 1983. I like the whole concept of being able to record all of the senses during a person’s experience. That and the afterlife element of the story makes this movie a winner for me. I also love Natalie Wood and Christopher Walken.

It’s a Wonderful Life – 1947. If I don’t get to watch this movie five times around Christmas I’m disappointed.

Contact – 1997. This is an adaptation of the Carl Sagan novel, and I love Carl Sagan. I love the whole concept of contacting extraterrestrials, the afterlife, etc.

The Great Outdoors – 1988. Classic vacation comedy that takes place in the north woods of Wisconsin, at a lakeside cabin. It stars John Candy and Dan Aykroyd.

The Big Blue – 1988. I’m not sure why I like this movie so much, but I do. The odd story of friendship and competitiveness, the characters, the settings in Greece and Italy, the ocean backdrop, or how it is all wrapped together. Rosanna Arquette is in the film as well, and I like her a lot.

Silent Running – 1972. After the end of all plant life on Earth, an ecologist (Lowell) maintains a greenhouse on a space station in order to preserve various plants for future generations. He is assisted by three robots and a small human crew. He rebels when he is ordered to destroy the greenhouse in favor of carrying cargo, a decision that puts him at odds with everyone but his mechanical companions. Lowell and his robots are forced to do anything necessary to keep their precious plants alive. It’s a quirky but cool story.

Heroes – 1977. This film stars Henry Winkler, Sally Field and Harrison Ford (in his first post-Star Wars role, but filmed before that movie’s release). Winkler plays a Vietnam War veteran with PTSD who sets out to find the men from his unit that had served with him in Vietnam. This was the first film released after the conflict ended in 1975 to address Vietnam War issues.

Top Gun – 1986. I love the story, I love the cast and I love the music. The story of hotshot fighter pilots who are the best of the best.

Voices – 1979. This is a mushy movie about a musician and his love for a young deaf woman, who’s a teacher of deaf children, and who dreams of becoming a dancer. It’s definitely a chick flick, but hey, guilty as charged. I really like it anyway.

Enemy Mine – 1985. During a war between humans and an alien, reptilian, race, a human spaceship pilot ends up stranded on an alien world, along with an alien enemy fighter. They are forced to work together to survive. As time goes by, they become unlikely friends. It’s a feel good story about friendship, set in an unlikely place with unlikely characters.

Full Metal Jacket – 1987. Director Stanley Kubrick’s take on the Vietnam War follows smart-aleck Private Davis (Matthew Modine), quickly christened “Joker” by his foul-mouthed drill sergeant (R. Lee Ermey), as he endures the rigors of basic training. Joker graduates, becomes a Marine, and is sent to Vietnam as a journalist, covering, and eventually participating in, the bloody Battle of Hué. If you’re a Marine this movie is your “holy grail.” If you want to know what it’s like to be a Marine, this is the film to watch.

“300” – 2007. The story of the historic Battle of Thermopylae, or “the hot gates,” all the way back in 480 B.C., between a small group of Spartan warriors and the massive Persian army. It’s kind of like the Greek version of The Battle of the Alamo. Awesome battle scenes.

Talladega Nights: The Ballad of Ricky Bobby – 2006. This movie is a redneck’s dream. It’s about an unlikely NASCAR race car driver, and it’s funny, funny, funny. It stars Will Ferrell.

Shenandoah – 1965. A film about the Civil War. James Stewart has remained steadfast in his opposition to the war on moral grounds. However, he is forced to become involved in the conflict when his son-in-law is called upon to serve in the Confederate forces, his youngest son is captured by the Union army, and another son and his pregnant daughter-in-law are killed by looters.

Avatar – 2009. A classic story of greedy corporations and the military complex versus the little guys. Awesome special effects that take place on the wonderful alien world of Pandora.

The Vikings – 1958. This is a classic movie that appeals to my Viking heritage. The cast of Kirk Douglas, Tony Curtis, Janet Leigh and Ernest Borgnine is great as well.

Gladiator – 2000. The story of a Roman general (Russel Crowe) who ends up fighting as a gladiator and getting revenge for his murdered family. This just a well-made and well-acted movie.

The Right Stuff – 1983. This film chronicles the first 15 years of America’s space program. It focuses on the lives of the seven original Mercury astronauts and the dangers and frustrations experienced by them and NASA in general. In other words, this is right up my alley.

Braveheart – 1995. The medieval story of, Scottish patriot, William Wallace’s revenge for the murder of his wife and the treatment of his countrymen by England.

Stand By Me – 1986. I like this movie because the kids in the movie remind me of myself and my friends when I was growing up.

The Hangover – 2009. Just a funny movie with funny characters, that takes place in Las Vegas.

Troy – 2004. Based on Homer’s epic story “The Iliad,” this film portrays the battle between the ancient kingdoms of Troy and Sparta (the story of Helen of Troy and the Trojan Horse as well) and the historic battle between Achilles (Brad Pitt) and Hector (Eric Bana). Achilles leads his Myrmidons along with the rest of the Greek army invading the historical city of Troy, defended by Hector’s Trojan army. Cool battle scenes and an updated depiction of this classic story.

Forrest Gump – 1994. I love the story and the lessons it teaches. I can relate to the historical references in the film as I have lived through and experienced them all as well.

The Matrix – 1999. This is an interesting film that really makes you think. I learned that we are the ones that really limit ourselves form accomplishing anything.

Dumb and Dumber – 1994. A very stupid movie, but very funny movie as well, about two friends that are idiots.

Apollo 13 – 1995. “Failure is not an option.” This is one of my favorite lines, and it is taken from this movie. We have NASA, we have astronauts and we have a true story of overcoming impossible odds. I’m in.

Star Trek – 2009. The story of how USS Enterprise, the most-sophisticated starship ever built, got its crew of Captain Kirk, Spock, Scotty and “Bones” Dr. Leonard McCoy. They did a great job casting for these characters. I like them just as much, if not more, than the original cast.

Jurassic Park – 1993. Who wouldn’t like to be able to see actual dinosaurs in a zoo-like environment? I would, I would!   The whole story here of how they made it happen to how the theme park came crashing down is Great. The special effects are, of course, amazing.

Pulp Fiction – 1994. This is just a cool organized crime movie, directed by Quentin Tarantino, with a great cast that has interwoven stories and a lot of cool music. John Travolta, Samuel L. Jackson, Ving Rhames, Uma Thurman and Bruce Willis star in the film, and there are a lot of other good actors in the movie as well.

There are a lot of other movies that I like as well, that didn’t make my list. I had to cut my list off at some point!

We all have our own tastes and likes, of course.

If there is a movie that you just can’t imagine why I don’t have it on my list, let me know. 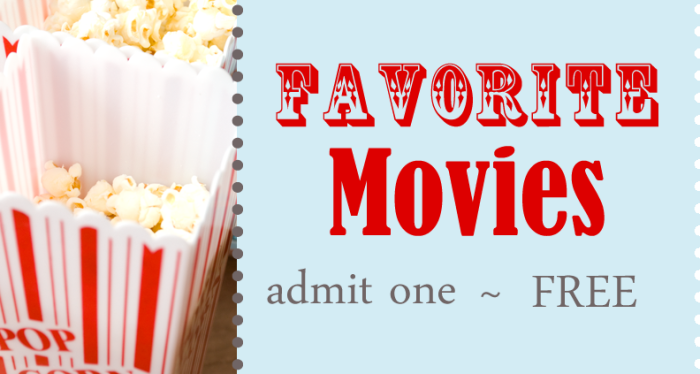