The democrats and the biased mainstream media have recently been trumpeting (no pun intended) “what a good thing” it was that President Trump had someone looking after him, referring to the spy…, oh, I mean the “informant,” that the FBI chose to assign to him, for no legal reason that can be substantiated. Some say it may even have been more than one “informant.” Will wonders never cease?!

So…, the obvious question is: If having a spy in your campaign is such a good thing, why didn’t Hillary warrant her own spy…, oops, there I go again, I mean “informant?”

Hillary should be outraged that her campaign was not afforded the same considerations as President Trump’s campaign. I mean, c’mon, fair is fair!

She could even make the case that this “informant” (see, I’m catching on) might have kept her out of trouble by “informing” her that it might not be a good idea to delete all of those emails, destroy her own personal server, or trust any other classified information with Anthony Weiner’s wife, aka Hillary’s sidekick, Huma (I’ve seen too much to ever live a normal life again) Abedin.

The “informant” might have also informed her that funding and feeding a phony Russian dossier about Donald Trump might come back to haunt her.

I’m sure it won’t be long before this “spy/mole,” which evolved into “informant,” will further evolve into a “guardian angel!”

God, help us all. 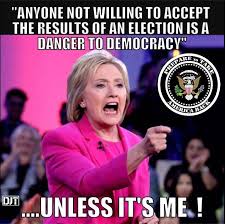