(Can any of the multitude of these award shows manage to not bash President Trump? It really has gotten rather boring and pathetic.)

“’I’m gonna say one thing: f— Trump!’ he stated, as he clenched his two fists in the air, leaving panic-stricken broadcast censors trying bleep out the remarks. ‘It’s no longer down with Trump, it’s f— Trump!’”

(Why, little Bobby DeNiro, I do believe we need to wash your mouth out with soap! You do realize that children, and people that don’t appreciate foul language were watching that show?)

(“Profanity is the parlance of the fool.” – Theodore Roosevelt)

(How would you respond to that Bob, “f— Roosevelt?”)

“The U.S. viewers at home heard dead silence, though in other regions the f-bombs reportedly weren’t censored. The expletives sparked a roaring reaction from the audience, with many of the celebrities standing up.”

(Yes, I’m sure the incestuous group of liberal “know it alls” that were present enjoyed any bashing of President Trump, especially a “f-bomb” ridden one.)

“The veteran actor went on to introduce Bruce Springsteen’s performance. ‘Bruce, you can rock the house like nobody else,’ said De Niro. ‘Even more important in these perilous times, you rock the vote. Always fighting for, in your own words, truth, transparency, integrity in government. Boy, do we need that now.’”

(Wow. Your level of confusion is quite impressive, Bob. What is so “perilous” exactly about these times? You go on to say, “…truth, transparency, integrity in government. Boy, do we need that now.”

(So, are you insinuating that we had “truth, transparency and integrity” during the eight years of your beloved President Obama’s administration? Is that what you’re saying? Like I said, your level of confusion in quite impressive.)

“Backstage, playwright Tony Kushner (Who?) praised De Niro for his tirade on stage, saying he agrees with the sentiment expressed by the actor. ‘Good for him. I mean, it’s Robert De Niro. Who’s gonna argue with him?’ he said.”

(Well, I guess I would argue with him, and am arguing with him. You do realize, Tony Kushner, that De Niro only “plays” gangsters and tough guys in movies. He really isn’t one in real life.)

“Kushner went on to denounce the Trump’s presidency as “the Hitler mistake” that put a “borderline psychotic narcissist in the White House.”

(“The Hitler mistake?” You obviously are no historian, rather choosing to throw around Hitler’s name instead of “F-bombs!” And the nerve of calling President Trump a “borderline psychotic narcissist” when you’re addressing an auditorium full of borderline, psychotic, Hollywood narcissists. Ha!)

“De Niro is no fan of the president. In March, the actor bashed Trump at the Fulfillment Fund fundraiser. ‘A college education is important, but education without humanity is ignorance. Look at our president. He made it through the University of Pennsylvania, so he was exposed to a quality education, but he’s still an idiot. And he lacks any sense of humanity or compassion,’ he said, according to the Hollywood Reporter.”

“De Niro again criticized Trump in April during the opening night of the 2018 Tribeca Film Festival. ‘America’s being run by a madman who wouldn’t recognize the truth if it came inside a bucket of his beloved Colonel Sanders Fried Chicken,’ he said.”

(You’re an actor, Bob, not a comedian. Why don’t you do us all a favor and just stick to your day job? Please.) 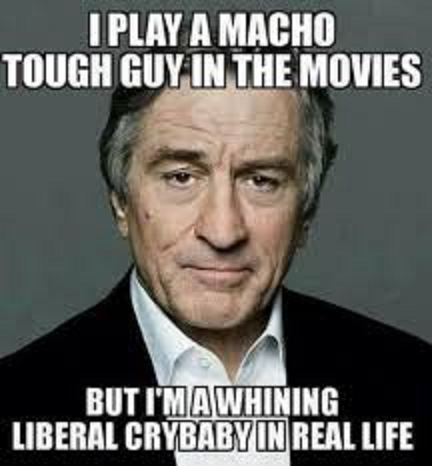