Democrat Maxine Waters, who is a Congressional Representative from California, and an avowed Trump hater, made the following comments at a rally in L.A., over the weekend, and then later again in a TV interview:

“Let’s make sure we show up wherever we have to show up. And if you see anybody from that Cabinet in a restaurant, in a department store, at a gasoline station, you get out and you create a crowd. And you push back on them. And you tell them they’re not welcome anymore, anywhere.”

On MSNBC, she chose to double down on her remarks, saying she has “no sympathy” for members of the Trump administration:

“Congresswoman Maxine Waters, an extraordinarily low IQ person, has become, together with Nancy Pelosi, the Face of the Democrat Party. She has just called for harm to supporters, of which there are many, of the Make America Great Again movement. Be careful what you wish for Max!”

As to be expected, Republicans criticized her remarks, while many Democrats tried to deflect criticism from Waters to President Trump. While still other Democrats showed their support of her instigating comments with their silence.

Here are some of the responses to “Whacky Max’s” comments:

Meghan McCain, daughter of Arizona Republican Sen. John McCain, called Waters’ comments “absolutely insane” and “extremely dangerous.” She also asked, “Does this mean when we go out to dinner we should be ambushed?!?”

Democrat House Minority Leader Nancy Pelosi referred to Waters’ comments as “unacceptable” but, of course, eventually blamed President Trump’s “daily lack of civility” for provoking responses like those of Waters.

“In the crucial months ahead, we must strive to make America beautiful again. Trump’s daily lack of civility has provoked responses that are predictable but unacceptable. As we go forward, we must conduct elections in a way that achieves unity from sea to shining sea,” Pelosi tweeted.

(Thank you, again, Congresswoman “Moonbeam,” for your disconnected and hallucinogenic comments.)

Democrat House Minority Whip Steny Hoyer said, “The American people have the right to speak their mind, and I agree that they ought to express their deep frustration with the Trump Administration’s policies,” the Maryland Democrat said in a statement, adding, “We can do so while maintaining respect, notwithstanding President Trump’s lack of civility. We should rise above his hatefulness.”

(Again, according to Mr. Hoyer, everyone is allowed to “speak their mind,” as long as they are a liberal, of course, otherwise we are spouting “hatefulness.”)

Democrat Rep. Adriano Espaillat of New York would not criticize Waters. “To get sidetracked into these debates about whether or not somebody was welcome at a restaurant takes our eyes off of what’s going on in America today,” Espaillat said, adding, “Maxine Waters is entitled to her opinion and I respect that.”

(Excuse me Mr. Espaillat, but that is all the democrats do is attempt to “sidetrack” the accomplishments and issues of the day. Oh, and just like all of your liberal democrat friends, you believe, “Maxine Waters is entitled to her opinion and I respect that.”  Again, and again, and again, you believe everyone is “entitled to their opinion,” as long as they are a liberal, of course.)

Ok, well there you have it.

Ms. Waters and the democrats want “push back?” WE can do some pushing back too.

You asked for it, and now you got it. “We The People” are tired of your crap, and we‘re not sitting back and taking it anymore.

“You called down the thunder, well now you’ve got it.” 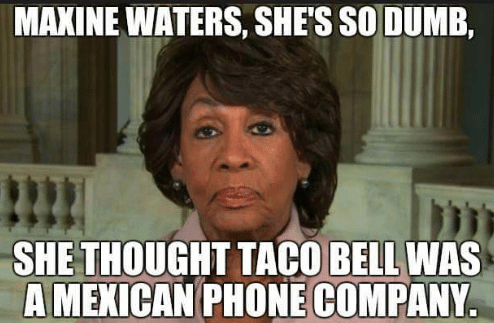