When it came to the mainstream media reporting about President Obama, everything was put in the most positive light and from the best perspective. Anything negative or controversial was usually ignored or downplayed.

When it comes to the mainstream media reporting about President Trump, everything is put in the worst possible light and from the worst possible perspective. Anything negative is amplified and anything positive is downplayed or ignored.

Here’s a recent headline that is a good example: “The Trump economy might be peaking.”

Anything “might” be doing anything at any given time, right?  It’s just a choice of how you want something to appear.

In Obama’s case, the headline would probably have read: “Obama’s economy continues to climb!”

See what I mean?  You can literally find numerous examples of this day in and day out.

This is how the biased media misrepresents what’s going on in many cases.

The real problem that we’ve come to learn is that the slant of these stories is not just the result of bias surfacing unconsciously.  They are, in a lot of cases, the result of a biased individual intentionally slanting an article one way or another.  This is definitely a much more concerning matter.

An unconscious display of favoritism is just a biased view manifesting itself without any real malice or premeditation.

A conscious display of this type of manipulation is called propaganda, however, and using propaganda in an effort to sway the beliefs of the people in one way or another, in order to promote their ideology, has a much more sinister intention.

The good news is many of us recognize this, and take it into consideration when listening to, watching or reading these reports.

The bad news is, many of our fellow Americans retain an inherited or an assumed trust of the mainstream media, and they fall prey to their attempts at shaping the national narrative and the “news” in general.

This has become a never ending battle.  “The swamp” and the biased mainstream media (fake news) never take a day off.  It’s a constant drumbeat of misinformation that can start to take root if you’re not careful.

Thanks to the 2016 election, we got a clear picture of who is on whose side.

On one side we have “the swamp (which includes the FBI, the DOJ, the CIA, et al),” or “the deep state,” the democrats, liberals, socialists, communists (not to be redundant), the entertainment world, the establishment republicans, money grubbing interests from around the world and the biased mainstream media.

On the other side we have President Trump, independent republicans, Americans that love their country and the few media outlets that practice true journalism, which are interested in reporting the truth and which work to keep the propagandist biased mainstream media at bay.

As you can see, the opposition to truth, justice and the American way is quite formidable.

Whose side are you on? 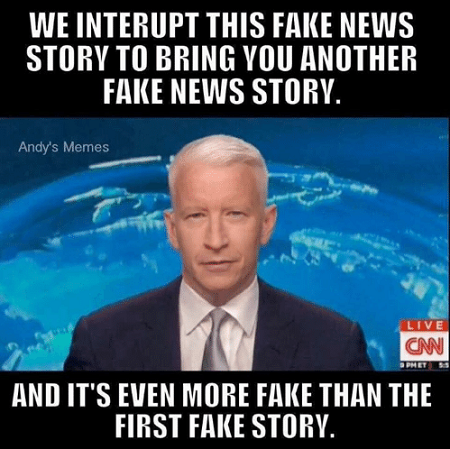