If the American people lose confidence in the integrity of our election system, we are one big step closer to our republic dissolving right before our eyes.

We hear about examples of voter fraud, and liberals (And please note: The issue of voter fraud is exclusively synonymous with liberals/democrats) are always quick to discount our voter fraud concerns as “not that prevalent,” “inconsequential,” “unfounded,” or “very rare.”  Then they will quickly turn the discussion to the “real” problem, in their minds, of voter suppression, which truly is virtually a non-existent problem.

Anyone who wants to vote in this country surely gets every opportunity to do so.

Can you imagine how quickly the “biased, liberal, fake news media” would jump on any credible case of voter suppression?

I rest my case.

Okay.  Back to the concerns about voter fraud.

The big question is how many fraudulent votes are acceptable?

Who’s going to the first one to stand up and volunteer to have their vote cancelled out by a fraudulent vote?

And I’m guessing not you either.

The right to vote in a free and fair election is our most basic civil right, and one on which many other rights of the American people depend.

Our government should be able to guarantee that every eligible individual who wants to vote can, and that no one’s vote is stolen or discounted.

Voter fraud is real and hundreds of convictions have been made and documented.

According to The Heritage Foundation:

Contrary to the claims of many liberals, the problem of voter fraud is as old as the country itself.  As the U.S. Supreme Court noted when it upheld Indiana’s voter identification law in 2008, “flagrant examples” of voter fraud “have been documented throughout this Nation’s history by respected historians and journalists.”

Attempts to commandeer election results have been documented dating back to the 1800’s.  In one New York election in 1844, 55,000 votes were recorded even though there were only 41,000 eligible voters. Decades later, these efforts have continued and determined fraudsters have become only more creative in their efforts to fix the outcome of elections.

So what are the different types of election fraud that liberals use in an attempt to undermine our election system?  Well, here they are:

Impersonation fraud at the polls: Voting in the name of other legitimate voters and voters who have died, moved away, lost their right to vote for some reason, but remain registered.

False registrations: Voting under fraudulent voter registrations that either use a phony name and a real or fake address or claim residence in a particular jurisdiction where the registered voter does not actually live and is not entitled to vote.

Duplicate voting: Registering in multiple locations and voting in the same election in more than one jurisdiction or state.

Buying votes: Paying voters to cast either an in-person or absentee ballot for a particular candidate.

Illegal “assistance” at the polls: Forcing or intimidating voters, particularly the elderly, disabled, illiterate, and those for whom English is a second language, to vote for particular candidates while supposedly providing them with “assistance.”

Ineligible voting: Illegal registration and voting by individuals who are not U.S. citizens, or are otherwise not eligible to vote.

Altering the vote count: Changing the actual vote count either in a precinct or at the central location where votes are counted.

Altering the vote count: Changing the actual vote count either in a precinct or at the central location where votes are counted.

So, who is responsible for ensuring the integrity of our elections?

Each state is generally responsible for the administration of its own electoral systems, including elections for federal office.  This being the case, I feel we open ourselves up to many problems, mostly because the states don’t have access to national databases, which presents the possibility of citizens being registered in multiple states and voting in multiple states.

Of course MrEricksonRules has his own remedy for all of our voting integrity woes!

First, our government needs to establish a new national holiday called “Election Day,” of course.  This would offer everyone every opportunity and ample time to vote.  Especially those people who work for a living.

There would be no “early” voting.  All voting would occur on Election Day.

All voting machines would be identical, and issued to the states by the federal government.

Polling stations would be manned by current federal and/or state employees.  This would give us a level of accountability we currently don’t have.

All votes would have to be cast in person.  The practice of using absentee ballots would be discontinued.  Military personnel would vote at their duty stations and their votes would be routed to their corresponding state based on a military database.  Others unable to be in their “home” state to vote on Election Day would be able to cast a provisional ballot in the state they were physically in, then each state would then be responsible for sending these votes to their respective states.  These votes would only be counted if the total number of provisional votes could potentially change the outcome of the election.

Every adult individual would be required to obtain a Federal Voter Identification Card, if they want to vote.

Initial Federal Voter Identification Cards would then be mailed out based on this database.  People not receiving cards by a given date would then be responsible for acquiring a card at designated state or federal locations.

Any person voting who could not be verified on the national voter database would be casting a provisional ballot.

Once you have voted, this would be entered into the national voting database, which would limit you from voting again, in the current election.

Any other problems or issues of national importance may be submitted at any time to Mr. Erickson at MrEricksonRules.com.

“The right to vote cannot come before the integrity of the vote.  They have to go hand in hand.” – Mr. Erickson

Joseph Stalin, who ruled the Soviet Union (Russia) from the mid-1920s until his death in 1953, said, “It doesn’t matter how many people vote, only who counts the votes.”

“A vote is like a rifle: its usefulness depends upon the character of the user.” – President Teddy Roosevelt

So everyone get out there and vote (only once please, and only in the district you’re supposed to vote in please, and only if you are a legal citizen of The United States and of legal age please), tomorrow, on November 6th! 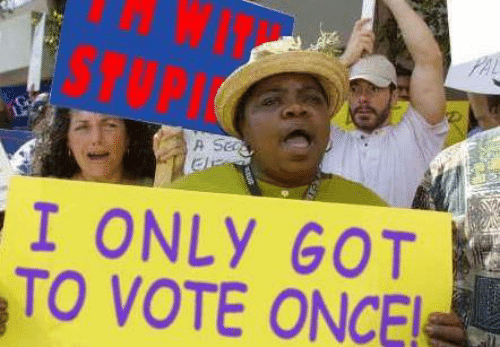