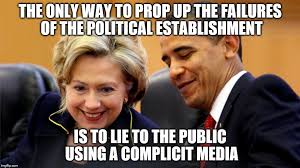 Oh how the news of these massively botched operations differs depending on what party is in office.

In this instance, President Obama and the democrats were presiding over this, to put it nicely, “crap storm.”

This is also why we’re not hearing anything about it until five years after it happened.

If President Trump had been in office, we would be seeing Congressional hearings, another special investigator, and wall-to-wall coverage by the “biased, liberal, fake news media.”

So what exactly are we talking about here?

Well, in a nutshell, the CIA’s undercover communications network suffered a “catastrophic” compromise back in 2013, and it all started in Iran.

What exactly is meant by “catastrophic?”

According to Zach Dorfman and Jenna McLaughlin of Yahoo News, “[At the time,] countless numbers of CIA officers scrambled to contain a disaster of global proportions: a compromise of the agency’s internet-based covert communications system used to interact with its informants in dark corners around the world.  Teams of CIA experts worked feverishly to take down and reconfigure the websites secretly used for these communications; others managed operations to quickly spirit assets to safety and oversaw other forms of triage.

‘“When this was going on, it was all that mattered,’ said one former intelligence community official.  The situation was ‘catastrophic,’ said another former senior intelligence official.”

Between 2009 and 2013, the U.S. intelligence community experienced “crippling intelligence failures” (“experiencing crippling failures” has become a hallmark of the Obama administration) related to their secret internet-based communications system.  This system was a key means for remote messaging between CIA officers and their sources on the ground around the world.

The previously unreported global problem originated in Iran and spread to other countries.

I would say that “previously unreported” is an understatement.  I believe the words, “suppressed,” “quelled,” or even “concealed” would be better choices here.

To make matters worse, the problems with the network were “left unrepaired, despite warnings about what was happening, until more than two dozen sources died in China in 2011 and 2012 as a result,” according to former intelligence and national security officials.

Yahoo News’ information regarding this global CIA communications failure is based on conversations with eleven former U.S. intelligence and government officials directly familiar with the matter who requested anonymity to discuss sensitive operations.

“More than just a question of a single failure, the fiasco illustrates a breakdown that was never properly addressed. The government’s inability to address the communication system’s insecurities until after sources were rolled up in China was disastrous. ‘We’re still dealing with the fallout,’ said one former national security official. ‘Dozens of people around the world were killed because of this.’”

All of this is in addition to the 2012 Benghazi attack, which resulted in the deaths of U.S. Ambassador to Libya J. Christopher Stevens and U.S. Foreign Service Information Management Officer Sean Smith.  CIA contractors Tyrone Woods and Glen Doherty were also killed in the melee, while ten others were wounded.

Despite persistent accusations against President Obama, Hillary Clinton, and Susan Rice, ten investigations, six by Republican-controlled congressional committees, did not find that they or any other high-ranking Obama administration officials had acted improperly.

Is it any wonder that this whole mess was kept on the “down low” by “the swamp?”

I’m sure, if any investigations are held regarding this debacle, the results would be the same: They would say they didn’t find that “they or any other high-ranking Obama administration officials had acted improperly.”

How about “politically” and “selfishly?”

How about “without concern for the lives of their subordinates?”

The whole intelligence failure started in Iran back in 2009, when the Obama administration announced the discovery of a secret Iranian underground enrichment facility.

This is what happens when you conduct foreign policy through the “biased, liberal, fake news media.”

“Angered about the breach in their security and secrecy, the Iranians went on a concerted hunt, looking for foreign spies,” said one of the former senior intelligence officials.

The ensuing pressure on the CIA’s communications system led to its demise.  “It was not built to withstand the sophisticated counterintelligence efforts of a state actor like China or Iran.”

Iran executed some of the CIA informants and imprisoned others in an intelligence setback that one of the former officials described as “incredibly damaging.”

These events hampered the CIA’s capacity to collect intelligence in Iran at a critical time, just as Tehran was forging ahead with its nuclear program.

“It’s not clear whether China and Iran cooperated, but the former officials said the communications systems used in both countries were similar. The two governments may have broken the system independently. But Iranian, Chinese and Russian officials were engaged in senior-level communications on cyber issues around this time.”

Former officials said the fallout from the compromises were likely global in scope, potentially endangering all CIA sources that used some version of this internet-based system worldwide.

As Iran was making fast inroads into the CIA’s covert communications system, back in Washington an internal complaint by a government contractor warning officials about precisely what was happening was winding its way through a bureaucratically slow appeals system.

Again, according to Dorfman and McLaughlin, “In 2008, well before the Iranians had arrested any agents, a defense contractor named John Reidy, whose job it was to identify, contact and manage human sources for the CIA in Iran, had already sounded an alarm about a ‘massive intelligence failure’ having to do with ‘communications’” with sources. According to Reidy’s publicly available but heavily redacted whistleblower disclosure, by 2010 he said he was told that the ‘nightmare scenario’ he had warned about regarding the secret communications platform had, in fact, occurred.”

Reidy refused to discuss his case with Yahoo News.

By November of 2011, Reidy was fired because of what his superiors said were “conflicts of interest.”

In his 2014 appeal to the intelligence community inspector general, Reidy noted that CIA agents were “in danger,” and that the “CIA is aware of this.” “The design and maintenance of the system is flawed.”

“Irvin McCullough, a national security analyst with the Government Accountability Project, a nonprofit that works with whistleblowers, put the issue in even starker terms. ‘This is one of the most catastrophic intelligence failures since September 11th,’ he said. ‘And the CIA punished the person who brought the problem to light.’”

A spokesperson for the Senate Intelligence Committee has declined to comment.

The House Intelligence Committee did not respond to requests for comments either.

Please note that the words “Senate” and “Intelligence” are typically mutually exclusive (meaning they don’t go together)!

One of the central concerns among those familiar with the scope of the breakdown is the institutions responsible for it were never held accountable.

Even several years after the breach, the concern within the intelligence community is accountability.

“In the end,” said the former official, “our biggest insider threat is our own institution.”

So who oversaw this whole mess at the time? Besides Barack Obama, at the top of course, we had Hillary Clinton as Secretary of State, then John Kerry as Secretary of State 2013-2016.  Leon Panetta (a longtime Clinton flunky) was the CIA Director 2009-2011, followed by General David Petraeus 2011-2012, and finally followed by John “Benedict Arnold” Brennan, who was the CIA Director 2012-2017.

As I was reviewing the article from Yahoo News, by Dorfman and McLaughlin, I was struck by the fact that over the course of a 3,260 word article, the name “Panetta” was never mentioned, the name “Petraeus” was never mentioned, nor was the name “Brennan.”  The names “Clinton” and “Kerry” were not mentioned either.  The name “Obama” was mentioned only once, and that was only regarding the “Obama administration” announcement of the discovery of a secret Iranian underground enrichment facility.  No mention at all regarding this whole CIA communication fiasco.

As was mentioned before, it is all about accountability, and more specifically a lack thereof when it comes democrats and “the swamp” in general.

I guess looking back, we could make the claim they were all too busy playing their little political power games and spying on American citizens to worry about their real responsibilities.