Dr. Martin Luther King Jr. stated, “I have a dream that my four little children will one day live in a nation where they will not be judged by the color of their skin but by the content of their character.”

I sincerely believe that time has arrived.

You’re always going to have exceptions to everything, but for the most part, I think Dr. Martin Luther King Jr.’s “dream” has become reality.

I believe today, for the most part, people are judged by their actions and by what they say rather than the color of their skin.

A problem we face today, however, is that some really don’t want to be judged by their character.  They prefer to use the color of their skin as an excuse or as a ticket to special considerations and allowances.

They prefer to use the color of their skin as a wedge between people of their skin color and people of other colors, either for fame, power, money or a combination of the three.

They say, “The meaning of King’s monumental quote is more complex today than in 1963 because ‘the unconscious signals have changed,’ according to the historian Taylor Branch, author of the acclaimed trilogy “America in the King Years.”

What does that mean?

It sounds to me like the people who would prefer to use the color of their skin for their own purposes are trying to tell us that Dr. Martin Luther King Jr.’s words mean something other than what anyone who understands English understands them to mean.

It’s a form of racial “spin” or racial propaganda.

Bernice King doubts that her father would really seek to ignore differences.

Yes we do celebrate cultural differences, Bernice, but excuse me if I reiterate that your father’s words, in this case, were words of inclusion and racial “blindness,” just like the “blindness” of justice.

It’s obvious that Bernice King makes her living off of her daddy’s coattails.  It’s definitely not in her best interests to acknowledge any level of racial progress.

“Unfortunately race in American history has been one area in which Americans kid themselves and pretend to be fair-minded when they really are not,” says Taylor Branch, whose new book is “The King Years: Historic Moments in the Civil Rights Movement.”

Well, I suppose we all can’t be as enlightened as you Mr. Branch.  But how do portend to know what “Americans” are supposedly kidding themselves about?  You’re obviously making quite a nice living off of your books about Dr. Martin Luther King Jr.

Like I mentioned before, money is one of the reasons people keep preferring to drive wedges between the races.

The quote is like the Declaration of Independence, says Roger Clegg, president of the Center for Equal Opportunity, a conservative think tank that studies race and ethnicity. In years past, he says, America may have needed to grow into the words, but today they must be obeyed to the letter.

“The Declaration of Independence says all men are created equal,” says Roger Clegg, president of the Center for Equal Opportunity. “Nobody thinks it doesn’t really mean what it says…”  “King gave a brilliant and moving quotation, and I think it says we should not be treating people differently on the basis of skin color.”

Many others agree. King’s quote has become a staple of conservative belief that “judged by the color of their skin” includes things such as unique appeals to certain voter groups, reserving government contracts for Hispanic-owned businesses, seeking more non-white corporate executives, or admitting black students to college with lower test scores.

In the latest issue of the Weekly Standard magazine, the quote appears in the lead of a book review titled “The Price Was High: Affirmative Action and the Betrayal of a Colorblind Society.”

“Considering race as a factor in affirmative action keeps the wounds of slavery and Jim Crow ‘sore and festering.’ It encourages beneficiaries to rely on ethnicity rather than self-improvement to get ahead,” wrote the author, George Leef.

The RightWingNews.com blog added, “The idea that everyone should be judged by the content of their character, not the color of their skin” in their list of “25 People, Places and Things Liberals Love to Hate.”

“Conservatives feel they have embraced that quote completely. They are the embodiment of that quote but get no credit for doing it,” says the author of the article, John Hawkins. “Liberals like the idea of the quote because it’s the most famous thing Martin Luther King said, but they left the principles behind the quote behind a long time ago.”

Thank you to CBS News for contributing to this article. 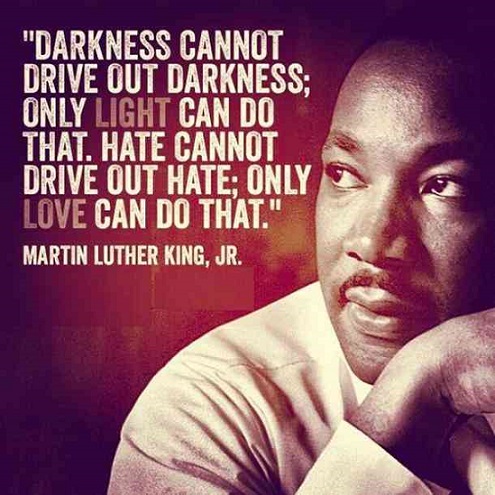