This is a damning statement coming from someone who is a legit and historically important environmentalist.

For nearly 50 years, Greenpeace has been sailing the world’s oceans protecting our planet and fighting for environmental justice.  From obstructing nuclear tests in the Pacific, to documenting plastics in our oceans; from conducting research into the effects of climate change in the Arctic, to stopping shiploads of illegal timber leaving the Amazon; from bringing humanitarian relief to communities devastated by extreme weather to collaborating with local authorities to arrest illegal fishing operations.

According to Alex Pappas of Fox News, “In a series of tweets, Moore argued Ocasio-Cortez, who has called for drastically reducing fossil fuel production, doesn’t realize what would happen across the world if the radical plan were implemented.”

‘“If fossil fuels were banned every tree in the world would be cut down for fuel for cooking and heating,’ Moore said in a tweet Saturday directed at Ocasio-Cortez. ‘You would bring about mass death.’”

“Referring to the New York Democrat as a ‘pompous little twit,’ Moore said, ‘You don’t have a plan to grow food for 8 billion people without fossil fuels, or get food into the cities.’”

“Moore also unloaded on her for calling climate change ‘“Our World War II.’”

‘“It’s her @GND [Green New Deal] that would be worse than WW2,” he said. ‘Imagine no fuel for cars, trucks, tractors, combines, harvesters, power-plants, ships, aircraft, etc. Transport of people & goods would grind to a halt.’”

“In another tweet, Moore called the Green New Deal ‘so completely crazy it is bound to be rejected in the end.’”

“He also referred to Ocasio-Cortez as a ‘garden-variety hypocrite,’ in response to a New York Post story that said the democrat frequently used gas-guzzling Uber and Lyft rides during her 2018 campaign instead of taking the subway station near her campaign office.”

‘“You’re just a garden-variety hypocrite like the others. And you have ZERO expertise at any of the things you pretend to know,’ Moore said.”

“Ocasio-Cortez responded to that story over the weekend saying she’s ‘living in the world as it is.’ But she said that shouldn’t be ‘an argument against working towards a better future.’”

It’s all a matter of perspective I guess.

Nobody is opposed to working towards a better future, unless your method of doing that destroys our future!

‘“The Green New Deal is about putting a LOT of people to work in developing new technologies, building new infrastructure, and getting us to 100% renewable energy,’ she said.”

Is there anything stopping the development of new technologies now?

Is there anything stopping the building of new infrastructure now?

The sticking point is that last one about “getting us to 100% renewable energy.”  It’s just not realistic.  Especially when she wants the United States to be “emissions free” in 10 years.

This is because she is predicting “our world will end in 12 years if we don’t change our ways.”

Her plan of course doesn’t take into consideration any other country on our planet…, just the United States, and we are already one of the best performing countries in the world regarding pollution and emissions.

I would agree with Patrick Moore that Ms. Ocasio-Cortez has no basis for her claims and no common sense regarding her “Green New Deal” demands.

Why the democrats would allow a “know nothing” idiot like Ocasio-Cortez to drive their environmental and economic agenda is beyond me.

On the other hand, I guess that’s just the way the democrats are doing business these days.  They are choosing to appeal to the lowest common denominator.

“We should never underestimate the capacity for peoples’ stupidness.” – MREricksonRules. 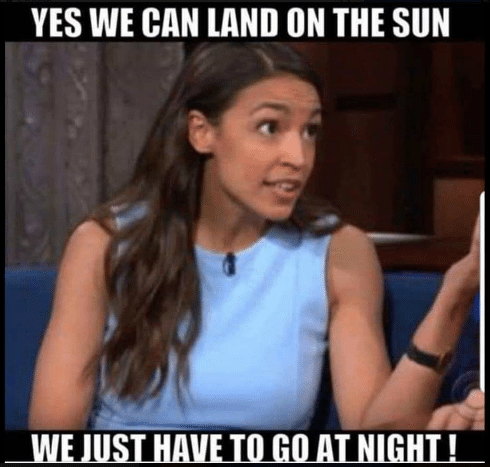