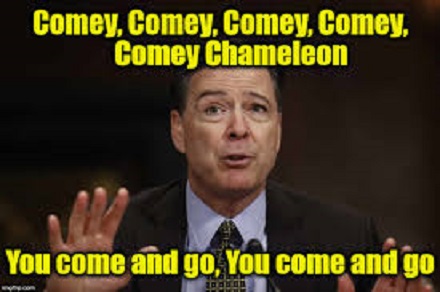 It’s funny how a little evidence can totally change your tune, isn’t it Mr. Comey?

This the same James Comey who basically called President Trump a liar.

This is the same James Comey who repeatedly declared that neither he nor any of HIS people at the FBI did ANYTHING wrong regarding their usage of the FISA process or their treatment of President Trump.

Now, according to Business Insider, Comey says, “He [Inspector General Michael Horowitz] was right, I was wrong [regarding defending the FBI’s use of the FISA surveillance process].”

“Former FBI Director James Comey on Sunday said he was wrong to defend the bureau’s [the FBI’s] use of the Foreign Intelligence Surveillance Act process when applying for a warrant to surveil Carter Page, a foreign-policy aide on the 2016 Trump campaign.”

You were the Director of the FBI at the time Mr. Comey, and YOU signed off on the FISA application!

“His statements marked a reversal from last week, when he said a Justice Department inspector general’s report on the origins of the Russia investigation exonerated the FBI of wrongdoing.”

“In fact, the report revealed that there were 17 ‘significant errors and omissions’ in the FISA applications involving Page.”

Only SEVENTEEN errors and omissions?!

That sounds like we’re taking ineptness, stupidity and/or disingenuousness to a new level!

Or…, these “omissions and “errors” were intentional.

Which do you think is more likely?

‘“He was right, I was wrong,’ Comey told the Fox News host Chris Wallace, referring to the Justice Department’s inspector general, Michael Horowitz, who wrote the report. ‘I was overconfident, as director, in our procedures.’”

Please allow MrEricksonRules to translate what exactly Mr. Comey is saying here in the language of the liberal, deep state, turds.

What he means is he was overconfident at the time that he could get away with doing whatever he wanted because he was confident that no one would ever be the wiser.

But President Trump messed all of that up by winning the election!

In my estimation, you are a long, long way away from just being “wrong.”

You, Mr. Comey, are a treasonous criminal, whom I am sure will get nowhere near the level of punishment he deserves.

‘“These errors and omissions resulted from case agents providing wrong or incomplete information’ to the Justice Department National Security Division’s Office of Intelligence and ‘failing to flag important issues for discussion,’ the report said.”

And these “errors and omissions” or just “providing wrong or incomplete information” were allowed to be shabbily submitted in an application having to do with a presidential candidate, his campaign, and later a president?

That’s taking professionalism and obeyance of the law to a new low as well.

“Horowitz also found that an FBI employee no longer working at the bureau doctored an email to make it appear as if Page wasn’t a source for another government agency. Had the FISA court been aware of this, it might have been exculpatory for Page [in Page’s favor].”

This is most certainly a crime…, and I don’t care if this person is no longer working at the FBI or not, I DEMAND that charges be leveled against this person and anyone else who was aware of this.

“Testifying before Congress last week, the inspector general didn’t mince words, saying there were ‘significant, serious failures’ on the FBI’s part when applying for the warrant to surveil [Carter] Page.”

“Asked whether his report vindicated Comey, Horowitz replied, ‘It doesn’t vindicate anyone at the FBI who touched this, including the leadership.’”

“Comey on [a recent] Sunday [show] downplayed the role of the so-called Steele dossier in the FBI’s obtaining a FISA warrant to monitor Page. The Steele dossier is an explosive collection of memos alleging collusion between the Trump campaign and the Russian government. The information in it is still largely unverified.” 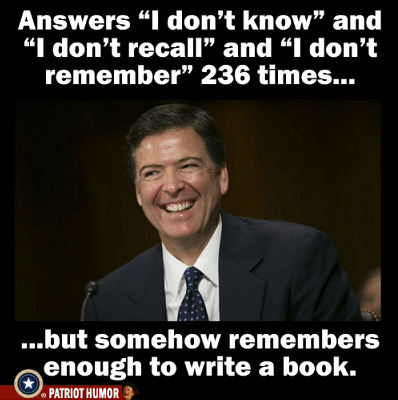 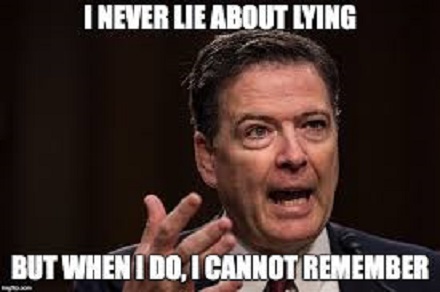 Not only is it largely “unverified,” it is largely accepted to not be worth the paper it’s printed on.  In fact, less.

“Comey said the dossier was ‘not a huge part of the presentation to the court,’ though he acknowledged that ‘it was the one that convinced the lawyers to move forward.’”

“Horowitz found that one portion of the first FISA application alleging possible coordination between Page the Russians on the 2016 campaign ‘relied entirely on’ information from the Steele dossier.”

This is completely the opposite of what Mr. Comey contended.

“Comey on Sunday said he hadn’t misrepresented the relevance of the Steele dossier in the Page FISA application process, but he added that ‘if I was, then I’m sorry that I did that.’”

I have been sorry when I’ve been caught speeding a couple of times, but that didn’t stop me from getting a ticket.

You didn’t “misrepresent” anything Mr. Comey…, you straight out lied. 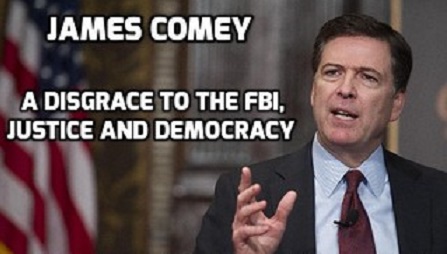 Shame on you, James Comey.

I really hope you and your treasonous co-conspirators get what’s coming to you. 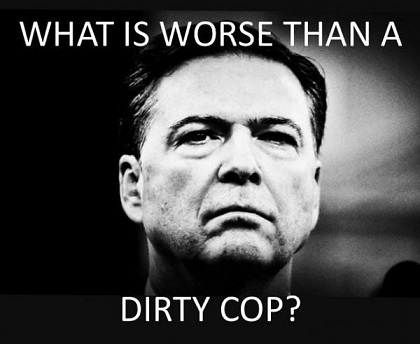