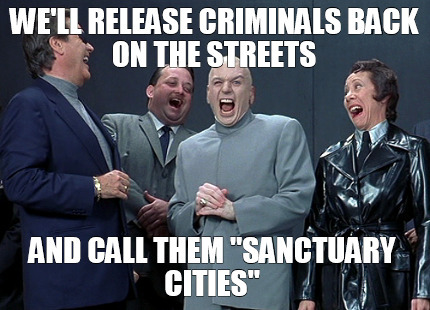 Do they have something against all of the legal, law abiding, citizens that live there?

I mean, not even the other illegals and/or criminals want a child molester running around.

Why are these elected officials so concerned about illegal immigrants who can’t vote, who are also convicted felons, who also can’t vote?

It just doesn’t make any sense.

Who are these politicians representing?

Is the majority of people who live there that ignorant?

“In an interview with Fox News this week, the head of Immigration and Customs Enforcement (ICE) ripped into Chicago Mayor Lori Lightfoot for her response to the sexual assault of a 3-year-old girl, allegedly at the hands of an illegal immigrant who had been sprung from custody by the city’s sanctuary policies.”

“The Democratic mayor had attempted to shift the blame to ICE in the aftermath.”

Ahhh yes, the old “trying to shift the blame game.” 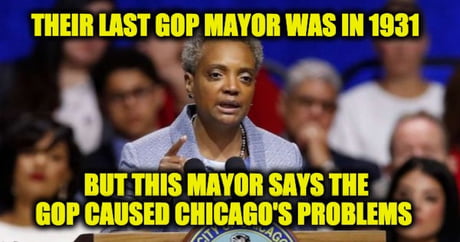 How, under any circumstances, could this possibly be ICE’s fault?

How, under any circumstances, could this possibly not be the fault of Chicago’s elected hierarchy and the local law enforcement who are willing to go along with these mindless policies.

The democrats have learned well from the originator of the denial strategy, former President William Jefferson Clinton, or “Wild Bill” as I like to refer to him.  He’s one of the original “Fondling Fathers,” along with Creepy Joe Biden!

Deny, deny, deny.  Lie, lie, lie.  Never, ever admit to anything or take responsibility for anything.

‘“I think it’s the height of hypocrisy,’ acting ICE Director Matthew Albence told Fox News. ‘I can tell you, I’ve been firsthand trying to work with the city of Chicago for the better part of a decade to get them to cooperate with us so we can get criminals off the streets.’”

And we all know Chicago doesn’t need any help getting criminals off the streets!  (cough, cough, cough)  Ya, right.

“The city’s controversial sanctuary city policies, in which local law enforcement ignore detainer requests from ICE that they be notified when arrested illegal immigrants are released from custody, have come under renewed scrutiny after one of those sprung from custody was arrested last month for allegedly sexually assaulting the 3-year-old in a bathroom.” 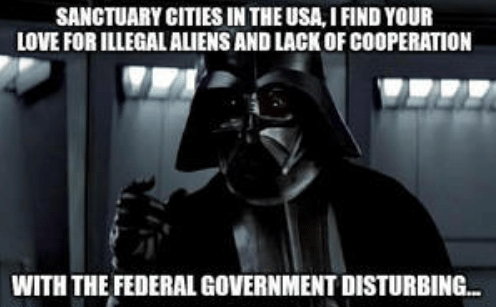 “ICE had lodged a detainer in June against Christopher Puente, who has several felony convictions and a prior removal, after he was arrested for theft. But Chicago ignored the request and released him.”

Why wouldn’t you ignore ICE’s request?  Mr. Puente sounds like an upstanding individual to me?

“He was arrested again last month for the alleged assault. According to ABC 7 Chicago, prosecutors said the attack happened after the little girl’s father took his son and daughter to the men’s bathroom at a fast-food restaurant, taking the boy into a stall but leaving the girl outside.”

“Prosecutors say Puente then motioned for the girl to enter his stall, locked it, held the victim by the back of her head and covered her mouth. They say the girl’s father heard her cries and frantically tried to open the stall — he was able to see her feet dangling off the ground. He eventually grabbed her legs and pulled her out from under the stall. The girl was later hospitalized.”

‘“They’re critical because we have said very clearly we are a welcoming city, a sanctuary city. Chicago Police Department will not cooperate with ICE on any immigration-related business,’ she [Mayor Lightfoot] said when asked about the case.”

So you can’t be a “welcoming” city without letting illegal immigrant criminals run free, committing crimes all over the place?

It sounds more like you’re creating a lawless crime zone as opposed to some kind of sanctuary. 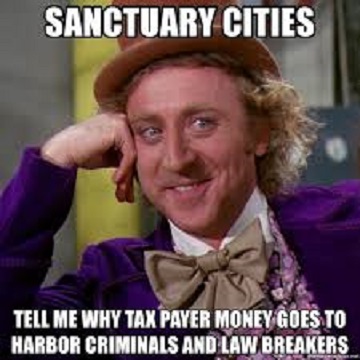 If I was that father, I would be looking to charge the city with aiding and abetting a felon in the commission of a crime.”

How can you argue that they didn’t?

How can you argue that the city didn’t aid this criminal in his escape from custody?

Actually…, correction…, if I was that father, Puente would be dead, and they’d be searching for the person who brutally attacked one of their sanctuary friends.

I feel the city and its elected officials need to be held criminally accountable for their policies when they harm the citizens they are supposed to be protecting.

‘“If ICE is complaining, then they should do their job better,’ she [Mayor Lightfoot] said.”

There’s her “glib response” for you.

“He went on to note that it is the latest in a string of violent crimes allegedly committed by illegal immigrants who were released from custody despite ICE detainers. The Trump administration has sought to bring attention to other cases too, including the sexual assault and murder of a 92-year-old woman in New York City earlier this year. The granddaughter of the victim blamed the sanctuary policies specifically for her death.”

In the old days, democrats used to pretend to be tough on crime when they were running for office and then pull a 180 once they got elected.

Nowadays, they proudly declare they’ll be soft on crime in order to get elected in these confused, liberal, dens of inequity.

‘“We have seen time and time again, unfortunately, way too many tragic circumstances like this poor 3-year-old kid who is going to suffer trauma for the rest of her life as a result of Chicago not turning this criminal over to us when we asked for him last year,’ Albence told Fox News.”

Even though President Trump has taken steps towards limiting federal funding to these cities, he should start getting really serious and direct the Department of Justice to start pressing federal charges against these elected partners in crime. 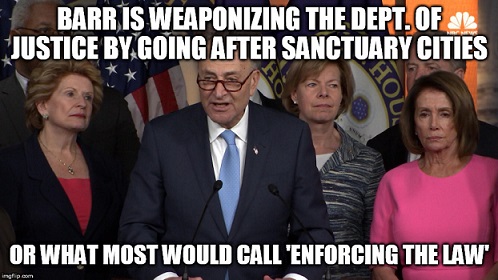