According to Brian Flood of Fox News, “CBS News’ Norah O’Donnell says ‘mostly peaceful’ protests caused $1B to $2B in damage from looting and arson.” 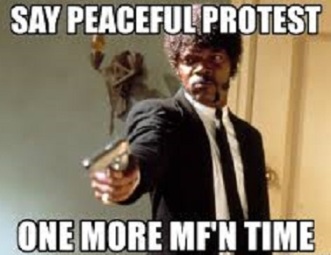 That’s a pretty general statement, and as we will learn, that only reflects damages over a two-week period, not for all “protests” in total.

“Many members of the mainstream media have made sure to paint nationwide protests as ‘peaceful’ in recent months– and ‘CBS Evening News’ anchor Norah O’Donnell demonstrated how far they’re willing to go on Wednesday night.” 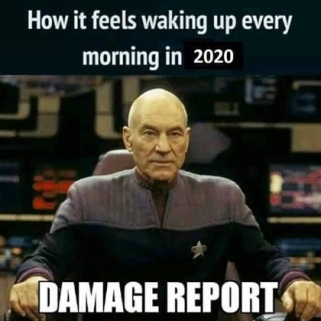 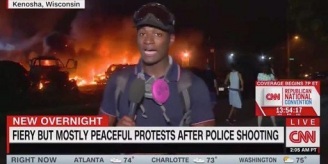 Let’s stop and think about this for minute.

Is that really the job of the mainstream media and “CBS Evening News” in this particular instance, to “paint” events which are happening in our country or around the world?

Aren’t “news organizations” supposed to report what’s happening and let the public decide what to think about it?

“Axios [Axios is an American news website, founded in 2016, and launched the following year by former Politico team members.] reported earlier in the day that damage caused by ‘riots and civil disorders’ from May 26 through June 8 would cost insurance companies between $1-2 billion.”

‘“The vandalism and looting following the death of George Floyd at the hands of the Minneapolis police will cost the insurance industry more than any other violent demonstrations in recent history,’ Axios reported.”

Please note that it still hasn’t been determined that the officers were responsible for George Floyd’s death.

“When O’Donnell reported the overwhelming figure, she made sure to insist the protests were mostly peaceful.”

The real “overwhelming figure” would be the figure that takes into account ALL of the “protesting,” rioting, looting, burning, and vandalizing which has occurred over the past four months.

I would conservatively, no pun intended, estimate those damages to be in the tens of billions of dollars…, which taxpayers and people with insurance will end up paying for, I’m sure.

‘“The protests in late spring were mostly peaceful, but damage from looting and arson will cost $1 to $2 billion in claims. That’s according to the Insurance Information Institute. And that would eclipse the previous high, the 1992 riots that followed the acquittal of four officers in the beating of Rodney King,’ O’Donnell told viewers.”

In truth, the “protests” were mostly NOT peaceful. 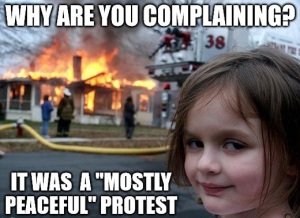 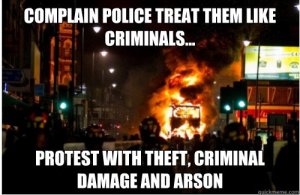 “Media Research Center analyst Nicholas Fondacaro pointed out that NBC’s ‘Nightly News’ and ABC’s ‘World News Tonight’ didn’t bother to report the alarming statistic. While O’Donnell at least informed viewers of the damage, Fondacaro doesn’t understand why she needed to add the disclaimer.”

Has the Media Research Center mentioned that the mainstream media has failed to report much, if any, of the violence tied to the “protests” of the last four months?

It’s not really surprising then that most of the media failed to point out these “alarming statistics,” is it?

‘“Earth to the liberal media, ‘peaceful’ protests don’t leave behind death, destruction, and shattered lives in their wake,’ Fondacaro wrote.”

What death, destruction and shattered lives are you talking about?  Don’t you realize, Mr. Fondacaro, that if the liberal propaganda fake news media doesn’t report something it didn’t really happen?

“Insurance Information Institute (or Triple-I) compiles information from a company called Property Claim Services (PCS), which has tracked insurance claims related to civil disorder since 1950, and other databases. It provided reports to Axios that the damage from unrest between May 26 and June 8 will be the most expensive in the nation’s history, surmounting the Rodney King riots of 1992 in Los Angeles.”

“The price tag could be as much as $2 billion and possibly more, according to Triple I. But the protests related to Floyd differ from others the database has tracked – never before have they been so widespread.”

‘“It’s not just happening in one city or state – it’s all over the country,’ Loretta L. Worters of the Triple-I told Axios. ‘And this is still happening, so the losses could be significantly more.’”

I guess Captain Obvious could be a woman, although I never really thought about it before! 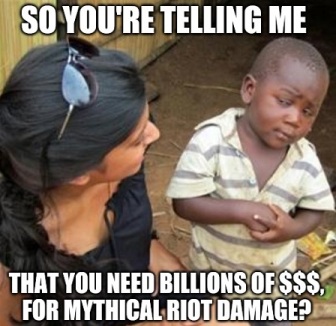 “The last time PCS compiled insurance losses for a ‘civil disorder event’ was 2015, when riots erupted in Baltimore after Freddie Gray died from a neck injury in police custody. But those riots did not even accrue $25 million in damages.”

Well that’s hardly even worth mentioning then!

Ya know, I’ve seen that rich liberals and Biden staffers, encouraged by Kamala Harris, are raising a lot of money to bail some of these violent “protesters” out of jail. Quite a few in fact.

I keep reading about some of these scared companies donating millions and millions of dollars to the Black Lives Matter organization too.

Maybe the bail-out fund, the Black Lives Matter organization, and the rest of their corporate friends can help pay for some of the damage their friends have caused?