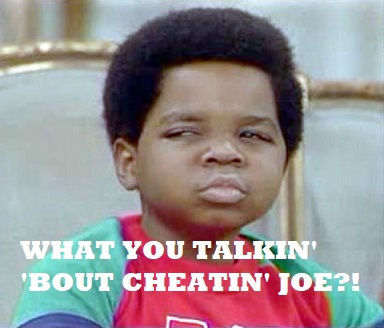 Brooke Singman of Fox News reports that, ‘“The will of the people has been heard,’ Biden says.”

If by “the people” you mean “the will” of all of your little anti-American, Marxist friends, then I’d give you that.

“Joe Biden, sworn in as the 46th president of the United States on Wednesday, declared ‘democracy has prevailed’ as he used his inaugural address to call for unity in a nation suffering from ‘deep’ political divisions and a pandemic that has crippled the country.”

You use that word “democracy,” Cheatin’ Joe, but I’m not sure it means what you think it means.

“From the West Front of the U.S. Capitol, Biden took the oath of office in a ceremony dramatically downsized because of the coronavirus pandemic as he vowed to take on the challenges of the day.”

‘“This is America’s day. This is democracy’s day,’ Biden said in his address. ‘America has been tested anew and America has risen to the challenge.’”

There you go with that word “democracy” again, Joe.

“In his speech, Biden said his inauguration was a day to ‘celebrate triumph, not of a candidate, but a cause – democracy.’”

There you go with that word “democracy” again, and again, Joe!

Okay, c’mon, this is getting tiresome.

“Biden pointed to the novel coronavirus, which he said ‘silently stalks the country,’ and has claimed more than 400,000 American lives since its inception, shifted to the economic downturn caused by the pandemic, and addressed the ‘cry for racial justice.’”

Do you get the picture that this entire crisis has been contrived by the democrats and their friends as a means to gaining control of the Whitehouse again?

‘“The dream of justice for all will be deferred no longer,’ Biden said.”

Does that include the 75 million voters who just got ripped off, Joe?

Nice try, but I think not.

Biden addressed ‘a rise of political extremism, of White supremacy and domestic terrorism,’ which he said, ‘we must confront and we will defeat.’”

Yes, we know…, if you’re white and supported President Trump, you are now categorized as a white supremacist and a domestic terrorist.

This, of course, is done in under the overriding theme of unity, however!

“Biden, though, shifted again to unity – saying that ‘restoring the soul and future of America requires so much more than words.’”

‘“It requires the most elusive of all things in democracy – unity,’ he said, adding that his ‘whole soul is in this.’”

‘“Bringing America together, uniting our people, uniting our nation,’ Biden continued. ‘And I ask every American to join me in this cause.’ Biden said the country must ‘fight the foes we face,’ which he said includes ‘anger, resentment and hatred, extremism, lawlessness, violence, disease, joblessness, hopelessness.’”

‘“With unity, we can do great things – important things,’ he said. ‘We can right wrongs.’”

Only the “wrongs” you consider “wrong,” right, Joe?

‘“Speaking of unity can sound like a fantasy,’ Biden said, acknowledging that ‘the forces that divide us are deep and they are real,’ but said ‘they are not new.’”

Well, actually, Sleepy Joe, they are kind of new.

All of this trampling on our first amendment right of free speech is relatively new.

‘“Our history has been a constant struggle between the American ideal that we all are created equal, and the harsh, ugly reality of racism … fear, demonization, have long torn us apart,’ Biden said, calling the ‘battle’ ‘perennial.’”

Well, I agree with that.

The only problem is you had 36 years in Congress and another 8 in the Whitehouse with your buddy Barack, and this “perennial battle” never seemed to bother you much.

“Biden, called for ‘dignity, respect,’ and urged Americans to ‘stop the shouting and lower the temperature.’”

You could maybe set a good example, Joe, by telling your democrat friends in Congress to back-off their inflammatory rhetoric a bit.

Okay, Chris…, it is now confirmed that you are one of “them.” I’m assuming you’ve already submitted your resume to CNN or MSNBC.

‘“For without unity, there is no peace – only bitterness and fury,’ he said. ‘No nation – only a state of chaos.’”

You and your friends are the ones who have been promoting this “chaos,” Illegitimate Joe.

‘“This is our historic moment of crisis in challenge, and unity is the path forward,’ he said. ‘We must meet this moment as the United States of America. If we do that, I guarantee, we will not fail.’”

Soooo, that whole unity thing is really not an option at this point, so, do you have another “path forward?”

“Biden urged Americans to ‘start fresh,’ and ‘begin to listen to each other again,’ pointing to the political climate in the U.S. throughout the Trump presidency.”

“Biden, speaking directly to supporters of his opponent, former President Trump, asked that they ‘hear me out as we move forward.’”

Oh, sure, Joe!  Just like the democrats heard President Trump out!

Whatever drugs you’re taking…, keep taking them, because they’re working!

‘“Take a measure of me and my heart,’ he said. ‘If you still disagree, so be it, that’s democracy, that’s America. The right to dissent, peacefully.’”

“But Biden warned that ‘disagreement must not lead to disunion.’”

“Meanwhile, Biden spoke to ‘those beyond our borders,’ saying that America ‘has been tested and we’ve come out stronger for it.’”

Now here are the people you’re really interested in talking to!

‘“We will repair our alliances and engage again,’ Biden said. ‘We’ll lead not merely by example of our power, but by the power of our example.’”

“Biden vowed that the U.S. will be ‘a strong and trusted partner for peace, progress and security’ around the globe.”

“The president warned that the U.S. is facing ‘an attack on democracy and on truth.”’

Uh, yeah!  BY YOU AND YOUR ANTI-AMERICAN, MARXIST FRIENDS!!!

‘“As well as the ‘raging’ coronavirus, ‘growing inequity,’ ‘systemic racism’ and ‘a climate in crisis.’”

‘“I give you my word. I will always level with you. I will defend the Constitution. I will defend our democracy. I will defend America and will give all of you – keep everything I do in your service, thinking of not power, but of possibilities, not of personal interest, but of public good,’ Biden said.”

‘“And together, we shall write an American story,’ he said, saying it would be ‘a story of decency,’ and of ‘light not darkness.’”

Well…, there is that whole cheating thing, Joe.

‘“May this be the story that guides us, the story that inspires us, and the story that tells ages yet to come that we answered the calls of history – we met the moment,’ Biden said. ‘Truth and justice did not die on our watch, but thrived.’”

I guess we’ll see about that, Joe.