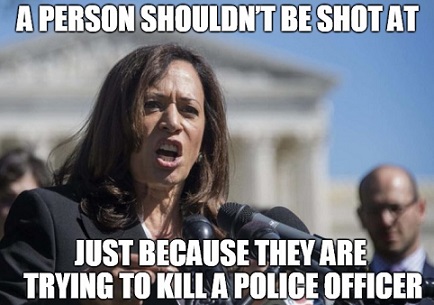 It’s a disturbing pattern of behavior by the democrats, which emulates the tactics used by their role-models, the Nazis.

“Accuse the other side of that which you are guilty.“ —  Joseph Goebbels, Nazi Propaganda Minister

Ronn Blitzer of Fox News reports, “A man who was twice bailed out of jail in separate cases by A FUND SUPPORTED BY VICE PRESIDENT KAMALA HARRIS has been arrested again while under investigation for another possible case, Minnesota prosecutors said.”

“According to the Hennepin County Attorney’s office, Thomas Moseley, 29, had been arrested and released in cases involving allegations that include damaging a police precinct in August and rioting in December. He was arrested again on Jan. 27, just 22 days after his latest release. During that span, he is also suspected of trying to illegally purchase a gun, and officers are investigating that matter.”

“Moseley is facing three new felony counts of fifth-degree possession of a controlled substance while in possession of a firearm for allegedly having marijuana, cocaine and psilocyn mushrooms.”

“In the two previously mentioned cases, the new criminal complaint says, referring to property damage and gun possession charges, ‘THE DEFENDANT WAS ABLE TO SECURE UNCONDITIONAL RELEASE AFTER THE MINNESOTA FREEDOM FUND POSTED $5,000 CASH IN ADDITION TO A BOND that had been previously secured.’ In a third now-pending case, the Defendant was then charged with Riot in the Second Degree from an event that occurred on December 31, 2020.”

“The complaint goes on to say that in that case, THE MINNESOTA FREEDOM FUND AGAIN SECURED MOSELEY’S RELEASE, THIS TIME POSTING $60,000 BAIL.”

“The Minnesota Freedom Fund says it is ‘part of a larger movement to end the harms of money bail and jailing people for poverty.’ THE ORGANIZATION [THE MINNESOTA FREEDOM FUND] RECEIVED SUPPORT FROM THEN SENATOR KAMALA HARRIS IN JUNE.”

“If you’re able to, chip in now to the @MNFreedomFund to help post bail for those protesting on the ground in Minnesota,” Harris tweeted.

CAN YOU IMAGINE THE UPROAR IF PRESIDENT TRUMP HAD SUPPORTED A FUND TO BAIL OUT THE CAPITOL PROTESTERS?!

Is this not blatantly endorsing civil unrest?

Is this not blatantly endorsing the violence against the police there and the destruction of public and private property?

Is this not blatantly inciting this violence?

If the democrats want to keep pursuing this bogus impeachment of former President Trump, don’t we also need to hold Kamala Harris accountable as well?

At least she is in office and eligible to be impeached under The Constitution!

“A FOX 9 report from August revealed that the organization bailed out individuals including Darnika Floyd, who was charged with second-degree murder after allegedly stabbing a friend to death, and Christopher Boswell, who is facing charges of sexual assault and kidnapping. The group put up $100,000 on behalf of Floyd and $350,000 on behalf of Boswell.”

Such a worthy cause.

“As for Moseley, his latest arrest stems from events arising from his apprehension in October, but he is also under investigation on suspicion that he allegedly used straw buyers to buy a semiautomatic weapon from a store on Jan. 7 and Jan. 12. He had just been released in one of his other cases on Jan. 5, jail records show.”

“On Oct. 15, 2020, Moseley was apprehended during a protest during a court appearance for the former officers involved in the police encounter that led to George Floyd’s death. Officers who saw Moseley in the courthouse knew that Moseley had already been suspected of damaging a police precinct on Aug. 15, and they arrested him for that. During the arrest, they allegedly found a gun in his waistband.”

“The new criminal complaint states that after the October arrest, police obtained a search warrant for Moseley’s truck after officers noticed the smell of marijuana and what appeared to be a gun case in the car. After performing a search, police recovered marijuana, cocaine and psilocyn mushrooms, as well as several handguns, a rifle, a shotgun, ammunition and other items including a hatchet, crowbar, gas mask and spray paint can. More weapons and marijuana were then found at Moseley’s home, the complaint says.”

“On Jan. 10, tests confirmed the nature of the drugs, and Moseley was arrested later in the month and bail was set at $250,000. According to Hennepin County Jail records, he remains in custody.”

Let’s support our Vice President and all chip in to get this domestic terrorist out of jail!

Like I said, VP Kamala Harris should be impeached!

And while we’re at it, we may as well go ahead and impeach “Illegitimate Joe” right away for actually doing what they claimed President Trump did, a quid pro quo, with The Ukraine!