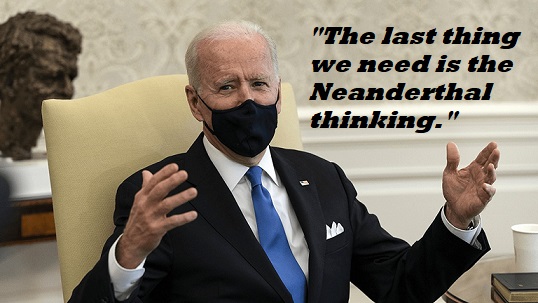 Yes, folks…, cognitively challenged Joe sticks one of his shuffling feet into his mouth again!

According to Caitlin McFall of Fox News, “President Biden took a swipe at Republican governors in Texas and Mississippi Wednesday, accusing them of ‘Neanderthal thinking’ following their decision to reverse COVID safety policies, including mask mandates.”

Do you mean the type of “Neanderthal thinking” that has been exhibited by democrat New York Governor, Andrew “Fredo” Cuomo, with his sexual harassment of women?

If you’re going to qualify any thinking as “Neanderthal thinking,” Cuomo’s behavior would seem to fit the bill the best of any.

‘“We’ve been able to move that all the way up to the end of May to have enough [vaccines] for every American, to get every adult American to get a shot,’ Biden told reporters from the White House Wednesday. ‘The last thing we need is the Neanderthal thinking.’”

“Despite the warning issued by health officials from the Centers for Disease Control and Prevention (CDC) regarding a fourth resurgence in coronavirus cases earlier this week, Mississippi Gov. Tate Reeves said all state regulations would be lifted starting Wednesday.”

‘“Starting tomorrow, we are lifting all of our county mask mandates and businesses will be able to operate at full capacity without any state-imposed rules. Our hospitalizations and case numbers have plummeted, and the vaccine is being rapidly distributed. It is time!’ he said in a tweet Tuesday.”

‘“With the medical advancements of vaccines and antibody therapeutic drugs, Texas now has the tools to protect Texans from the virus,’ Abbott said Tuesday, advising Texans that businesses will be allowed to operate at 100 percent capacity and masks are no longer required.”

Just to clarify, Illegitimate Joe, and all the rest of the democrats who don’t seem to listen very well, the governors DID NOT reverse COVID safety policies, including mask wearing, social distancing, or any other COVID precautions…, in fact, they both encouraged their people to continue to practice all recommended COVID precautions. They merely discontinued any official government restrictions and mandates, leaving it up to the citizens of their states to practice precautions as they seem fit.

“The same day Biden slammed the Republican lawmakers for allowing business owners to open their doors again to help put food on the table, a new disturbing report about COVID coming across the border came to light.”

“The Biden administration’s border patrol has released more than 100 illegal immigrants into Texas since late January that have tested positive for the coronavirus following their arrival, officials in a city on the U.S.-Mexico border tell Fox News.”

‘“Getting a shot in someone’s arm and getting the second shot…[is] going to take time. And it’s critical, critical, critical, critical [I guess it’s really critical!] that they follow the science,’ Biden told reporters from the White House. ‘Wash your hands, hot water, do it frequently, wear a mask and stay socially distance.’”

Well, it’s apparently NOT critical to “follow the science” when it comes to getting our kids back in school, or when shipping these COVID positive illegal immigrants all over the country to help spread the China virus, is it Joe?

There’s a nice use of masks and social distancing down there at the border as well!

Mark Moore, for The New York Post, reports that, “​More than 100 illegal immigrants who tested positive for the coronavirus — after their arrival in Texas ​​since late January — have been released by the Border Patrol into the Lone Star State ​and are free to travel to other parts of the US, according to reports.”

“Felipe Romero, a spokesman for the border city of Brownsville, told Fox News that they are telling the migrants who tested positive to follow Centers for Disease Control and Prevention guidelines to quarantine and maintain social distance, but that Brownsville doesn’t have the authority to stop them from traveling to the rest of the country.”

“He said the 108 positives account for 6.3 percent of the total migrants who received rapid tests at the city’s main bus terminal, a program that began on Jan. 25.”

“Some of the migrants described to ‘Noticias Telemundo Investiga’ ​how they were tested at the border and then allowed to hit the streets despite a positive result for the coronavirus.”​

“Miriam Izaguirre, a migrant from Honduras, said she crossed the Rio Grande on Monday with her young son and surrendered to authorities but was released within a few hours by the Border Patrol.”

‘“Right now, we were tested for COVID and they separated us … because we were positive,’ Izaguirre told news site. ‘We are waiting right now.’”

“They expect to board a bus to Houston.”​

“Other migrants who tested positive said they plan to travel to North Carolina, Maryland and New Jersey.”

“The immigrants said they didn’t receive any documentation that they had tested positive. They were simply informed that they had.​”

“President Biden has been reversing many of former President Donald Trump’s immigration policies since entering the White House, and US Customs and Border Protection said in a report last month that the border is experiencing a surge of migrants.”

“But speaking at a White House briefing Monday, Homeland Security Secretary Alejandro Mayorkas denied a crisis existed on the border.”

‘“The men and women of the Department of Homeland Security are working around the clock, seven days a week to ensure that we do not have a crisis at the border, that we manage the challenge as acute as the challenge is,’ he told reporters.”

3 thoughts on ““Neanderthal thinking” is “deplorable!””