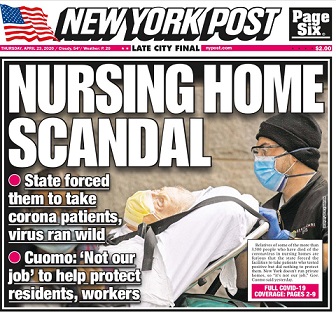 We’ve been hearing a lot about Governor Andrew Cuomo and the New York state COVID-19 nursing home deaths scandal lately, but fellow blue states, New Jersey, Pennsylvania, Michigan, and California have similar, though less egregious, stories. But tell the families of the people who were sentenced to death in these other states how “less egregious” they were.

According to Bernard Condon and Jennifer Peltz for The Associated Press (AP), “More than 9,000 recovering coronavirus patients in New York state were released from hospitals into nursing homes early in the pandemic under a controversial directive that was scrapped amid criticism it accelerated outbreaks, according to new records obtained by The Associated Press.”

“The new number of 9,056 recovering patients sent to hundreds of nursing homes is more than 40% higher than what the state health department previously released. And it raises new questions as to whether a March 25 directive from Gov. Andrew Cuomo’s administration helped spread sickness and death among residents, a charge the state disputes.”

You have to ask yourself, why would Governor Cuomo and the state of New York order people who had COVID-19 into nursing homes?

Why would he order the COVID-19 patients into exactly the one place they should not have been sent?

Why would he intentionally expose the most vulnerable of those among us to the virus?

The federal government, pressed by President Trump, worked around the clock to set-up New York City’s Jacob Javits Convention Center as a makeshift hospital, along with sending the USS Comfort, a military hospital ship, to New York City for the treatment of COVID patients.

Why were neither of these resources utilized by Cuomo and the state of New York?

Was it because Cuomo didn’t want to have to give President Trump credit for anything?

That was definitely part of it, in my opinion.

In addition, if you recall, back to the early days of the China virus, the democrats and the leftist propaganda media were all about establishing the virus as a legitimate pandemic as quickly as possible, while we were constantly shown, and reminded of, the growing death totals on a daily, and even an hourly basis.

The faster the death toll supposedly rose, the more they could hammer President Trump.

That being as it was, Cuomo and New York were deemed the stars of the show!

The death toll there was piling up quickly and considerably.

Cuomo was saying all of the right things, but doing all of the wrong things, which was appreciated by all of the fear mongers and power-hungry politicians, but not by the families of the people who actually counted in those numbers.

‘“The lack of transparency and the meting out of bits of important data has undermined our ability to both recognize the scope and severity of what’s going on and address it,’ said Richard Mollot, the executive director of the Long Term Care Community Coalition, a residents advocacy group.”

“The new figures come as the Cuomo administration has been forced in recent weeks to acknowledge it has been underreporting the overall number of COVID-19 deaths among long-term care residents. It is now nearly 15,000 up from the 8,500 previously disclosed.”

In other words, the Cuomo administration was happy to run-up the death toll, but not eager to let it be known it was, in part, because of their nursing home policy.

“The Cuomo administration’s March 25 directive barred nursing homes from refusing people just because they had COVID-19. It was intended to free up space in hospitals swamped in the early days of the pandemic. It came under criticism from advocates for nursing home residents and their relatives, who said it had the potential to spread the virus in a state that at the time already had the nation’s highest nursing home death toll.”

“Swamped” is a good choice of words here.

Were the governor’s “swampy” policies attributing to the “swamped” hospital conditions?

My opinion would be yes.

“Critics have long argued there were many other places those patients could have been sent, including New York City’s Jacob Javits Convention Center, which had been set up as a makeshift hospital, and the USS Comfort military hospital ship. The state contends those facilities were not suitable substitutes for the care of nursing homes.”

Dying was the better option in their opinion, obviously.

By this time the COVID-19 had been established as a serious threat, allowing the blue states to exercise the governmental control they desired.

“State health officials contend that asymptomatic nursing home employees, not recovering COVID-19 patients, were the driving factor in nursing home outbreaks. And they have repeatedly noted that by law, nursing homes weren’t supposed to accept anyone they couldn’t adequately care for.”

‘“At least 98% of nursing home facilities in the state had COVID in their facility before their first admission or readmission, and as we’ve seen across the nation, the major driver of infections appears to be from asymptomatic staff through no fault of their own,’ said state Health Commissioner Dr. Howard Zucker in a statement to the AP.”

“He added that the March 25 directive followed federal guidance, and that the percentage of coronavirus deaths statewide that happened in nursing homes didn’t change from the spring to the fall — after the directive was reversed.”

“A leader of a California group of nursing home clinicians and administrators, however, sees New York officials as seeking to shift blame.”

‘“There has never been any question in my mind that sending COVID-19 patients into completely unprepared, understaffed and under-resourced nursing homes both increased transmission and led to a greater number of deaths,’ said Dr. Michael Wasserman, president of the California Association of Long Term Care Medicine.”

“Cuomo, who wrote a book about his leadership in the virus crisis [as well as winning an Emmy award (for best actor in the role as a concerned and responsible governor)], has repeatedly downplayed criticism of his administration’s handling of nursing homes as a politically motivated ‘blame game.’”

“But the flurry of new disclosures began last month after state Attorney General Letitia James, a fellow Democrat, issued a blistering report accusing the administration of underreporting its long-term care deaths by more than 50%.”

“That was consistent with an AP report from August that focused on the fact that New York is one of the only states that counts just those who died on nursing home property and not those who died after being transported to hospitals.”

We also learned from a Cuomo assistant, Melissa DeRosa, from a leaked state democrat meeting, that the Cuomo administration intentionally withheld the information from state lawmakers…, and everyone else.

“Under heavy pressure to change its methodology, New York began issuing reports in recent weeks that added thousands more to its long-term care death toll since March. The new data also confirmed that COVID-19 deaths at some nursing homes are double or more what had been previously reported.”

“Overall, New York has lost over 45,000 people to the virus, more than every other state except California, according to figures compiled by Johns Hopkins University.”

Yeah…, I guess that’s worthy of writing a “Covid how to” book and winning an Emmy…, in a “democrat only” world.