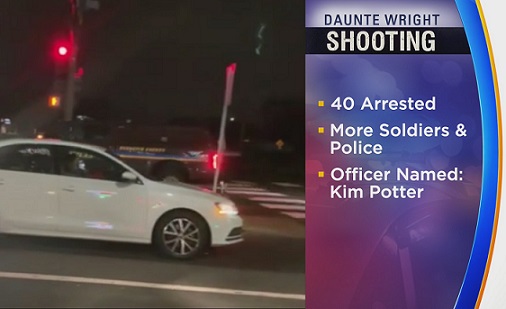 According to David Aaro of Fox News, “Minnesota police and rioters clash after Daunte Wright shooting.  The Police shot and killed Wright, a 20-year-old Black man, during a traffic stop Sunday, after female police officer mistakes firearm for taser and fatally shoots him.”

I’m not sure how you mistake your gun for a taser, but that’s her story.

“Minnesota authorities arrested about 40 people after rioters and police clashed for a second night in Brooklyn Center, Minn., authorities said during a news conference early Tuesday.”

“Hundreds gathered outside the Brooklyn Center Police Department Monday and defied curfew. They demanded justice for Daunte Wright, a 20-year-old Black man fatally shot by police during a traffic stop.”

No matter what happens, Daunte Wright is dead, and there’s no bringing him back.

I’m sure the officer who shot him will pay for her “mistake.”

I’m not sure what these crowds want.

Do they want to see her dragged out into the street and lynched?

Is that their idea of justice?

“The crowd chanted ‘Daunte Wright!’ Some shouted obscenities at officers.”

“Authorities fired tear gas, and flash-bang grenades into the crowd after warning them that they were in violation of curfew. Some rioters retaliated by throwing smoke canisters back toward law enforcement, while others launched fireworks at the police lines, according to reports.”

I’m sure they were all shaking in their boots when they were reminded they were braking curfew.

“Authorities said officers were shelled ‘pretty significantly,’ with objects thrown from the crowd. A few officers were hit by debris and suffered minor injuries during the unrest, police said.”

“Minnesota State Patrol Col. Matt Langer said law enforcement officials made attempts to talk with protest leaders about figuring how to peacefully disperse the crowds, but ‘unfortunately, those efforts weren’t successful … so … [we] stood and protected that building.’”

“Looters also broke into several businesses at a strip mall near the police station, including a Dollar Tree store, according to reports.”

Again, I’m not sure how you mistake your gun for a taser, but that’s her story.

It’s just a shame that this all could have been avoided if Wright would have just cooperated with the police rather than deciding to fight them.

That being said, he still did not deserve to die.

But that still doesn’t justify the actions of the rioters.

“Police shot and killed Wright during a traffic stop in a Minneapolis suburb on Sunday. The bodycam footage showed three police officers gathered near a stopped car that was pulled over an expired registration. Police attempted to arrest Wright for an outstanding warrant, leading to a struggle, followed by the fatal shooting.”

So, you’re telling me that three officers can’t control this one guy without having to taser him or shoot him?

They had the guy up against his car, with his hands behind his back and, somehow, he is allowed to get back into his car?

I would say these cops were guilty doing a very poor job of controlling the situation as well.

“Vice President Kamala Harris took to Twitter late Monday to comment on the shooting and said Wright’s family needs ‘justice and healing’ as the investigation plays out.”

‘“Prayers are not enough,’ she tweeted. ‘Daunte Wright should still be with us. While an investigation is underway, our nation needs justice and healing, and Daunte’s family needs to know why their child is dead—they deserve answers.’”

At least she managed to not burst into laughter for once.

And, the words “prayers are not enough,” seem to be a new catch phrase for the Godless, democrat Nazis.

Keep your ears open.  I’m sure this won’t be the last time we hear these words.

“Brooklyn Center Police Chief Tim Gannon said the officer who shot and killed Wright had intended to fire a Taser, not the handgun.”

“The officer was identified as Kimberly A. Potter, whose career with the Brooklyn Center Police Department has spanned more than 25 years, the Star Tribune reported. The Minnesota Bureau of Criminal Apprehension said Monday night that Potter is on standard administrative leave.”

On a side note…, it’s been over three months now, and we still don’t know the identity of the Capitol police officer who shot and killed, an unarmed, Ashli Babbitt, in the Capitol, on January 6, 2021.

“Wright died of a gunshot wound to the chest, the Hennepin County Medical Examiner’s office said in a statement.”

“Attorney Ben Crump confirmed to Fox News that the families of George Floyd and Daunte Wright will hold a joint press conference outside the Hennepin County Courthouse at 12 p.m. CT Tuesday amid the trial for Derek Chauvin.”

We can only hope they can find it in their hearts to plead for a stop to the violence.  Even if they do, it probably won’t help matters.

“Brooklyn Center, Minnesota Officer Kimberly A. Potter, who got her police license in 1995, was reportedly training a new officer at the time she fatally shot 20-year-old Daunte Wright.”

‘“She’s just a very dedicated, passionate, good person. It’s completely devastating,’ he told the newspaper. ‘She [is] just a good person, always willing to help out.’”

Well, that’s another shame, because her life is basically over now.

“Daunte Wright’s mother and father, Katie and Aubrey Wright, as well as their attorneys Ben Crump and Jeff Storms, appeared in an exclusive interview on ‘Good Morning America’ [GMA] on Tuesday.”

Again, way to go GMA.  Way to throw gas on the fire in exchange for ratings.

Not to be outdone by GMA, “Brooklyn Center Mayor Mike Elliott appeared on NBC’s ‘Today’ Tuesday morning after demonstrators defied a curfew on the second night of unrest since Daunte Wright’s shooting.”

‘“In this country if you are Black and you get pulled over by police you have a higher chance of being dead,’ Elliott said. ‘That is a fact.’”

The fact is, in this country if you get pulled over by police, and you don’t cooperate with them, or fight with them, you have a higher chance of being dead, regardless of what race you are.

The fact is, that way more white people are killed by the police, than black people.

Those are the facts, Mayor Elliot…, not your bit of racist, violence inciting, misinformation.

And, just a note to all of the rioters:

No one is saying what happened to Daunte Wright is acceptable.

And, you are not helping an already sad situation by looting business, and burning businesses, who had nothing to do with the situation.

In many ways, your actions are worse than those which apparently incited you.