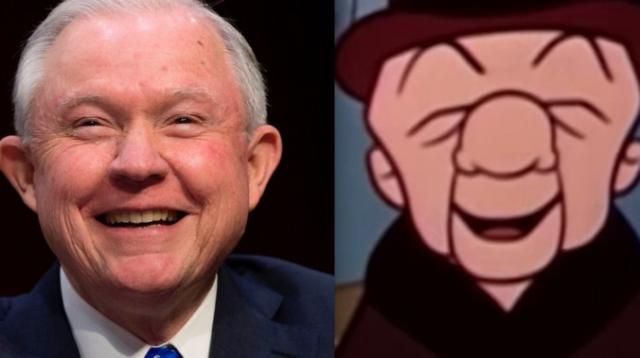 That is too funny!

President Trump recently referred to Attorney General Jeff Sessions as “Mr. Magoo.” I’m guessing that’s because he can’t seem to recognize something that should be investigated, even when it’s right in front of his face!

I’m sure quite a few youngsters have been googling “Mr. Magoo” in order to understand the reference.

President Trump has been blasting Attorney General Sessions recently for relying on someone (Michael E. Horowitz) who was an “Obama guy” to investigate allegations of the government’s FISA surveillance abuses, among other things. Mr. Horowitz is looking into so many different Clinton and Obama scandals it getting hard to keep track of them all!

“Why is A.G. Jeff Sessions asking the Inspector General to investigate potentially massive FISA abuse. Will take forever, has no prosecutorial power and already late with reports on Comey etc. Isn’t the I.G. an Obama guy? Why not use Justice Department lawyers? DISGRACEFUL!” President Trump tweeted.

It is disgraceful.  C’mon Magoo…, I mean Mr. Sessions, don’t be afraid to do your job!

If President Trump deserved to be investigated by a special counsel, Hillary Clinton, The Clinton Foundation, The DNC, Barack Obama, the Obama era FBI, and the Obama era Department of Justice damn sure do too!

One thought on ““Oh Magoo, you’ve done it again!” Well, actually you haven’t.”