I apologize.  I typically do not like to use words like “idiot,” but I really could not come up with another word that would be any nicer, yet be descriptively accurate.

This my first “idiot alert,” so buckle your seat belts and take your blood pressure medicine if you have any.

We are dealing here with an “opinion contributor” for “USA Today,” named Jeffrey Miron.  Mr. Miron not only writes for USA Today, he is the Director of Economic Studies at the Cato Institute and the Director of Undergraduate Studies in the Department of Economics at Harvard University.

So this is an individual who you would think had at least half of a brain.

Mr. Miron says, “The solution to America’s immigration problems is open borders, under which the United States imposes no immigration restrictions at all.”

(Please, please, tell us more about this wonderful idea!)

Miron continues by saying, “Trump, however, has it exactly backwards: The solution to America’s immigration problems is open borders, under which the United States imposes no immigration restrictions at all.  If the U.S. adopts this policy, the benefits will far outweigh the costs.”

(I believe I am a little “stupider” for having read that last section.  It’s like saying that legal drugs are good and illegal drugs are bad, so, legalize all drugs.)

He continues, “Government will then have no need to define or interpret rules about asylum, economic hardship, family reunification, family separation, DACA (Deferred Action for Childhood Arrivals) and so on. When all immigration is legal, these issues are irrelevant.”

(Aha.  If I’m not mistaken, “asylum, economic hardship, family reunification, family separation and DACA” are all issue we have to deal with now because of Democrat policies and laws.)

“The question of fairness about who enters first — those who waited in line or those who entered illegally — disappears.  Amnesty for existing illegal immigrants also becomes a non-issue.  Or an open borders policy could require anyone who entered illegally to exit the country — for exactly five minutes — and then re-enter legally.  (Ha!  You libs are so clever!)”

(I’ve got a better idea.  Let’s have liberals escort the illegal immigrants back over the border, have them wait five minutes, and then have the Mexican government arrest them all.  Well…, if we’re going to talk stupid, let’s go all the way!)

“Think about the money we could save and make.  Expenditure on immigration enforcement would shrink to nothing, because open borders means no walls, fences, screening at airports, ICE ‘Immigration and Customs Enforcement,’ deportations, detention centers or immigration courts.  A 2013 report estimated that immigration enforcement cost more than $18 billion annually, and standard indicators suggest costs have grown further since then.”

(Ya, we know…, liberals are all about saving money!  Now think about all the money we would have to spend on social programs and law enforcement, as well as all of the costs surrounding illegal drug related issues, yada, yada, yada.)

Mr. Miron goes on to claim that, “Economic efficiency will increase both in the USA and in immigrant-sending countries… One academic study (I hope it’s not a Harvard study.) predicts that if borders were open everywhere, world gross domestic product could be twice its current value… Expenditure on the welfare state will contract because even if immigrants vote for welfare spending, existing residents will vote for less generous benefits when they believe these accrue to recent immigrants…. Immigrants will not flood into America, although the rate of immigration might increase (Whaaaat?)… Terrorists could well enter via open borders, but they do so now illicitly. Little evidence suggests that our immigration restrictions prevent terrorist attacks… U.S. culture will not change dramatically… Even if values and culture change, so what? That happens in free societies. Who says America’s current values — some of them deeply evil — are the right ones?”

(I’m really not sure where to start here…, so I just won’t.  This guy is The Director of the Economics Department at Harvard University?  Envision me shaking my head while saying that last sentence!)

“Open borders are not without risks.  (Wiser words were never said Mr. Miron!)  Social safety nets might come under pressure (Ya think?!), and natives will face added competition for jobs, though the evidence on this is mixed.”

(That’s all you got regarding risks?!  I can think of like, oh I don’t know, a few hundred more, just off the top of my head!)

“Ultimately, immigrants have always been vital to America’s economic strength and to its commitment to freedom.  ( YES, LEGAL IMMIGRANTS!!!  LEGAL, LEGAL, LEGAL!!!  What don’t all of you libs understand about LEGAL VS ILLEGAL?!)  Since its founding, the United States has grown from a motley collection of colonies to one of the richest countries in the world (Ya…, and now the liberals want to screw it all up!!!!), with some of our fastest growth occurring when immigrants arrived in large numbers.”

Miron concludes by saying, “America has nothing to fear, and much to gain, from open borders.”

(Is Harvard aware Mr. Miron wrote this article and that it was published by USA today, and that it was read by over seven million people?  It’s funny if that’s so, especially since Harvard has had such a hard time with allowing conservative speakers to voice their opinions on their campus.  Just sayin’.) 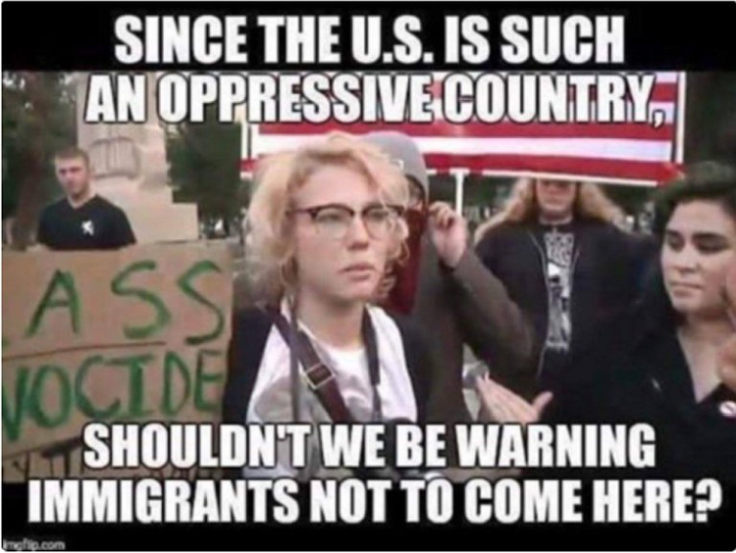