The answer to that question is both.

Which really makes this whole thing an absolute sham, just like the rest of the Mueller investigation.

During questioning, President Trump’s former lawyer, Michael Cohen, admitted that he had worked with democrat congressmen Adam Schiff of California and Elijah Cummings of Maryland in preparation for the hearings. 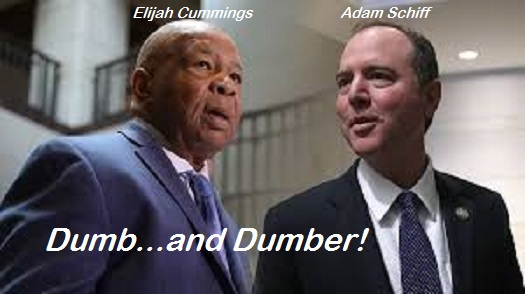 Is that even legal?

I guess the democrats just wanted to make sure they got the biggest bang for their buck out of Mr. Cohen.

It is well known that Mr. Schiff and Mr. Cummings are Trump haters through and through, as well as being politicians that wouldn’t know the truth if they tripped over it.

Even though Cohen regurgitated his liberal directed lines well, he obviously has learned his lesson regarding lying under oath.

“Questions have been raised about whether I know of direct evidence that Mr. Trump or his campaign colluded with Russia,” Cohen testified.  “I do not. I want to be clear. But, I have my suspicions.”

Well, you go on and have all of the suspicions you want Mike.  All of your suspicions and a buck will get you a cup of coffee.

According to Brooke Singman of Fox News, “Cohen hearing opens with fireworks as Republicans move to postpone testimony.”

“After former Trump attorney Michael Cohen is sworn in before the House Oversight and Reform Committee, Rep. Mark Meadows moved to postpone the hearing because written testimony, evidence was not received 24 hours in advance.”

“Cohen’s testimony was turned over the night before the hearing, while documents were made available the morning of the hearing.”

“Committee rules require witnesses to provide their testimony to Congress 24 hours in advance of a hearing. We know that rule was intentionally violated, as an adviser of Mr. Cohen’s felt the need to go on CNN last night and explicitly state his suggestion that Mr. Cohen ‘hold his statement’ as long as possible ‘so the other side can’t chew it up,’” Meadows said. ‘Lo and behold, we didn’t get Mr. Cohen’s statement till 11:00 p.m. last night and didn’t receive any of the ‘evidence’ until this morning.’”

“He added, ‘Today’s hearing is in explicit violation of the rules. It should be postponed immediately.’”

“Committee Ranking Member Jim Jordan, R-Ohio, also argued that the evidence and exhibits were not given to the minority staff at a reasonable time.”

‘“CNN had it before we did.  They had the exhibits before we did,’ Jordan said, later adding that ‘this is the first time a convicted perjurer has been brought back to be a star witness in a hearing.’”

“After a recorded vote, the motion failed, and the hearing proceeded.”

Are the democrats just incapable of following any types of rules whatsoever?

It sure appears that way.

While at the same time the republicans are always held to the strictest letter of the law.

The behavior of the “biased, liberal, fake news media” is just so blatantly unfair.  They are unabashed co-conspirators in the liberal narrative.

“Cohen went on to testify that Trump is a ‘racist, a con man, and a cheat.’”

Talk about the pot calling the kettle black!

Cohen also testified that, “Trump did not directly tell me to lie.”

You just figured that out on your own, huh?

Cohen also admitted to recording some of his conversations with Donald Trump, when Trump was his client, without Trump’s knowledge.

With friends, and lawyers, like that, who needs enemies?!

“Cohen also is testifying that Trump knew that adviser Roger Stone was reaching out to WikiLeaks concerning the publication of stolen Democratic National Committee emails but apparently will not claim Trump directed those communications.”

So what exactly is he saying here?  I don’t get it.  So what?

Congratulations Mr. Mueller.  None of this has anything to do with “Russian collusion,” nor does it implicate President Trump in anything or in any way.