According to Alexander Nazaryan of Yahoo News, “In a press conference on Wednesday morning, President Trump defended his efforts to brand the coronavirus epidemic as a specifically Chinese disease. Although it did originate there, Trump’s critics have said blaming China for the outbreak is xenophobic and racist.”

Couldn’t we have just assumed that?

‘“Why do you keep calling this the Chinese virus?’” ABC reporter Cecilia Vega asked The President, “during a briefing with the White House coronavirus task force.”

“The reporter noted that there has been a rise of racist incidents, some of them violent, against people of Asian origin across the United States.”

I haven’t heard about any of these “racist incidents… against people of Asian origin across the United States.”

Especially due to The President referring to COVID-19 as “the Chinese virus.”

How exactly are you able to make that connection, Ms. Vega?

Is this one of those liberal propaganda scenarios like the video that supposedly caused the Benghazi attack?

Perhaps you’d be willing to share more details and facts about these “incidents” you refer to?

If there were actual racial “incidents,” I’m sure your network and organization (ABC) would be more than excited to shine their light on them.

I won’t be holding my breath waiting for these stories to surface, however. 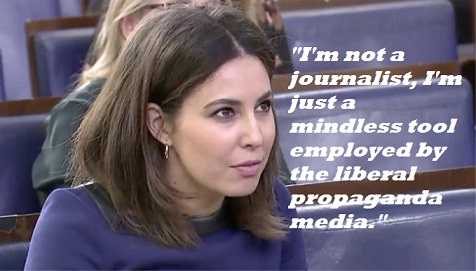 “Beijing has also promoted conspiracy theories that include blaming members of the U.S. military for causing the pandemic, something that clearly displeases [President] Trump. ‘That can’t happen,’ he said of that allegation. ‘It’s not going to happen. Not as long as I am president.’”

The White House later accused the media of “fake outrage” after the press conference:

Before the media’s fake outrage, even CNN called it the ‘Chinese Coronavirus.’

Those trying to divide us must stop rooting for America to fail and give Americans real info they need to get through the crisis.  — The White House (@WhiteHouse) March 18, 2020”

That’s right…, in the past we have had the Spanish flu, the West Nile Virus, the Asian flu, and the Hong Kong flu.

Nobody was crying about any racism or xenophobia in those cases.

Perhaps you should do a little research about a subject before you go shooting your mouth off about it, Ms. Vega?

Isn’t that a novel idea?

I don’t know what’s worse…, your journalistic deficiencies or having to listen to your condescending tone…, albeit fraudulent and stupidly elitist in nature.

David Knowles of Yahoo News reports, “The virus appears to have originated at Huanan live-animal market in Wuhan [China]. Of the first 41 people infected with the virus, 27 had gone to the market, which sells and kills animals, some of them wild, for consumption, Vox reported. In 2002, officials traced the outbreak of the SARS virus to a market in southern China that also sold live, wild animals for food.”

“China’s so-called ‘wet markets’ arose in the 1970s, when famine killed millions there. In 1978, China’s Communist government allowed private farming, and a decade later it legalized the private industry of raising and selling wildlife.”

“The unsanitary conditions of these markets and storage of animals in crates on top of one another has been blamed for the transmission of viruses between species. In the initial stages of the SARS outbreak, Chinese officials withheld information on the number of people infected and later conceded it was ‘not well prepared’ for the epidemic.”

I believe, like President Trump, that China fully deserves to take the credit, again, for this latest virus…, “The Chinese Virus,” or “The Wuhan Virus,” and that there’s nothing xenophobic or racist about it.