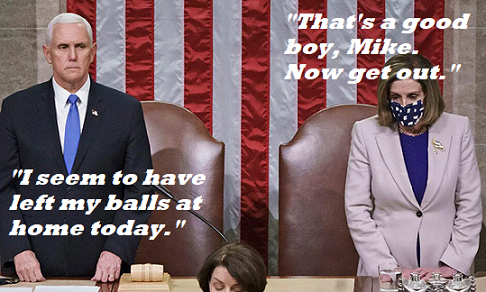 And, again, by “they” I mean our wonderful politicians, our ever-diligent news media, and “the swamp” in general, regarding the protesters coming to Washington.

Let me begin by giving Vice President Mike Pence a shout-out for his contribution at the Senate’s electoral vote session!

Maybe, if the DOJ and FBI had done their jobs investigating election fraud, there would have been no need for the protesters to come to Washington.

And former Attorney General Bill Barr has the nerve to say, “President Donald Trump’s conduct…, was a betrayal of his office and supporters.”

If anyone betrayed his office, it was you, Barr.

In a statement to The Associated Press (AP), Barr said Thursday that, “orchestrating a mob to pressure Congress is inexcusable.”

What’s wrong with “pressuring Congress” to uphold The Constitution?

You should have tried it yourself more often.

The AP continued by saying, “Barr was one of Trump’s most loyal and ardent defenders in the Cabinet.”

Excuse me, but I had to stop laughing before I could continue!

Can we get any “fact checkers” to validate that statement?

Oops…, I forgot that “fact checkers” only “fact check” statements made by conservatives.

Fact checking the “fake news” is not allowed.

The Ap continues by saying, “Barr resigned last month amid lingering tension over the president’s baseless claims of election fraud and the investigation into Biden’s son.”

I think you would have to actually do some investigating before you could determine the claims were “baseless.”

All you would’ve had to do was pretend you were checking into election fraud, and that may have been enough.

But you couldn’t even be bothered to do that.

Maybe, if The Supreme Court had even bothered to hear Texas’ lawsuit, which was backed by 17 other states by the way, there would have been no need for the protesters to come to Washington.

But no one even wanted to hear about election fraud, and all of our concerns were dismissed out of hand.

Texas and the other 17 states’ concerns were just completely unfounded and unworthy of even listening to their concerns.

Again, all The Supreme Court would’ve had to do was consider the states’ concerns of election fraud, and that may have been enough.

But they couldn’t even be bothered to do that.

Were they afraid of having to consider the truth?

It sure seems that way.

This is why the protesters showed up in Washington.

THEY WERE ALL TIRED OF HAVING TO PUT UP WITH ALL OF THE LIBERAL AND ESTABLISHMENT REPUBLICAN BS, WHILE HAVING NO RECOURSE NOW, SINCE THE ELECTION PROCESS HAS APPARENTLY BEEN COMPROMISED, AND NOBODY SEEMS TO CARE!