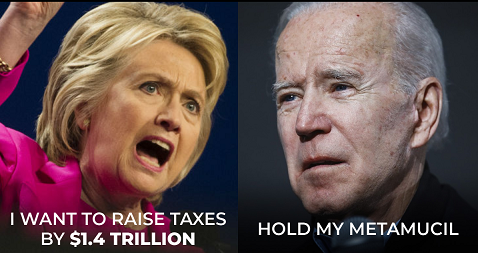 EXTRA, EXTRA, READ ALL ABOUT IT…, DEMOCRATS WOULD SUPPORT TAX INCREASES!!!

This headline actually exists on the FOX News website: “Biden says he will get Democratic votes for tax increase.”

And this is somehow news?!

Don’t go too far out on that limb Illegitimate Joe!!!

Brooke Singman of FOXBusiness is the one who gets credit for coming up with this revelational story.

Anyway…, back to the democrats’ proposed tax hike.

“Holding a razor-thin majority in the Senate, losing one seat means losing power for Democrats. In the House, they lead by eight seats, 219 to 211 with five vacancies.”

“Biden’s emerging plan, a source told Bloomberg, would raise the corporate tax rate from 21 to 28% and raise the income tax rate on individuals making over $400,000. It would also raise capital gains taxes on those making over $1 million, expand the estate tax, and pare back tax preferences for certain businesses. The tax hike would likely take effect beginning in 2022.”

“An analysis of Biden’s campaign tax plan conducted by the Tax Policy Center estimated it would raise $2.1 trillion in new revenue over a decade.”

“One year after the last major tax hike, in 1993, came what is known as the ‘Republican Revolution,’ in which the GOP picked up eight seats in the Senate and won a net 54 seats in the House, along with a net 10 governorships.”

I can definitely see a repeat of that on the horizon.

“The tax hike is meant to offset Biden’s next major spending package, which is set to focus on infrastructure and green jobs and could cost around $4 trillion, more than double the latest COVID-19 stimulus bill.”

Hopefully our country can survive until the 2022 elections…, although, if the democrats manage to change the election laws as well, it won’t really matter.

One thought on “Biden says Democrats will support his tax increase!”