…at least for the moment.

According to Nicole Darrah and John Roberts for Fox News, “Former Arkansas Republican Governor Mike Huckabee says Deputy Attorney General Rod Rosenstein’s critical comments [about] the Russia election interference investigation [and of the Obama administration for their handling of the Russia investigation] is a soft way of saying there was a cover up.”

“Deputy Attorney General Rod Rosenstein, who frequently found himself in the political crosshairs due to his role in the special counsel’s Russia probe and whose departure has long been expected, submitted his resignation on Monday to President Trump, effective May 11.”

Ugh.  I think I just threw up in my mouth a little.

‘“His devotion to the Department and its professionals is unparalleled,’ the statement read. ‘Over the course of his distinguished government career, he has navigated many challenging situations with strength, grace, and good humor.’”

Ahhhhh!  Ok…, that did it…, now I just hurled all over my keyboard!

What is Barr talking about?!

At times it seems that Attorney General Barr is a pretty “straight shooter,” but then he comes out with this junk regarding Rod Rosenstein, and puts himself back into the “political hack” category.

Rod Rosenstein was implicated in the FBI surveillance abuses against the Trump campaign in, recently released, declassified memos.

Rosenstein was responsible for at least one questionable surveillance warrant (FISA) application, which he signed, knowing full well that information supporting the application was obtained from a partisan anti-Trump dossier funded by Hillary Clinton’s campaign and the Democrat Party.

According to Saagar Enjeti, a White House Correspondent for The Daily Caller, “President Donald Trump agreed that alleged discussions of Deputy Attorney General Rod Rosenstein invoking the 25th Amendment in the days after the firing of former FBI Director James Comey constituted an illegal coup attempt in a Monday morning tweet.”

‘“This was an illegal coup attempt on the President of the United States. Dan Bongino on @foxandfriends True! — Donald J. Trump (@realDonaldTrump) February 18, 2019,’”

“McCabe detailed two occasions in which Rosenstein raised the prospect of using the 25th Amendment to remove Trump from office and even suggested that two cabinet officials would be willing to involve themselves in the scheme.”

The 25th Amendment allows for the removal of the President of the United States if a majority of his Senate-confirmed cabinet believe he is no longer capable of discharging his duties while in office.

“Rosenstein’s discussion of wearing a wire and talk of the 25th Amendment was first reported by The New York Times in September 2018.”

“McCabe also alleges that Rosenstein suggested in a meeting that he would wear a wire into the Oval Office in meetings with Trump. The former FBI deputy director told ‘60 minutes’ in an interview that he took Rosenstein’s suggestion so seriously that he brought the idea up to FBI lawyers who waved off his suggestion.”

“The original New York Times report of Rosenstein’s discussion of wearing a wire into the Oval Office and invoking the 25th Amendment nearly prompted his ouster in September 2018. Trump, however, appeared to accept Rosenstein’s explanation at that the report was exaggerated or not true, and the deputy attorney general was allowed to keep his job.”

“The president changed his tune on Twitter Monday morning, however, indicating he now believes the reports.”

‘“Wow, so many lies by now disgraced acting FBI Director Andrew McCabe. He was fired for lying, and now his story gets even more deranged. He and Rod Rosenstein, who was hired by Jeff Sessions (another beauty), look like they were planning a very illegal act, and got caught….. 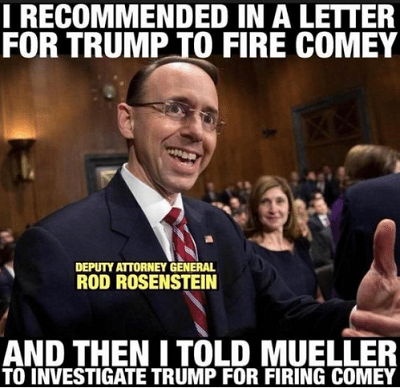 Rosenstein also took over the Russia investigation after then AG Jeff Sessions recused himself from the investigation.  It was Rosenstein who later appointed Mueller to his post and got the whole “Russian collusion” and President Trump “witch hunt” rolling.

Quite a “distinctive” and “dedicated” career, huh?

I would say that his “devotion” was to “the swamp,” and the rest of his treasonous cohorts…, not the Department of Justice.

On his way out, Rosenstein has even defended Attorney General Bill Barr’s handling of the Mueller report.

Also, “Rosenstein was part of a small group of [Justice] department officials who reviewed the document [the Mueller Report] and helped shape its public release. After Mueller didn’t reach a conclusion on whether Trump had obstructed the investigation, Barr and Rosenstein stepped in and determined the evidence wasn’t enough to support such an allegation.”

“In his resignation letter, Rosenstein thanked Trump ‘for the opportunity to serve; for the courtesy and humor you often display in our personal conversations; and for the goals you set in your inaugural address: patriotism, unity, safety, education, and prosperity, because a nation exists to serve its citizens.’”

Oh, oh…, I’m starting to feel a little sick to my stomach again!

“…because a nation exists to serve its citizens,” huh?

And “swampy” federal employees, like yourself, exist to serve themselves and “the swamp.” 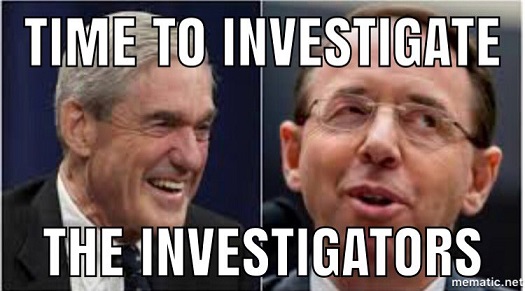 Rosenstein’s picture should be in the dictionary next to “slimy swamp monster.”

I’m glad to see Rosenstein go for now, but hopefully we’ll see him again in the not too distant future, giving up some his cohorts to again save his slimy, treasonous a$$!