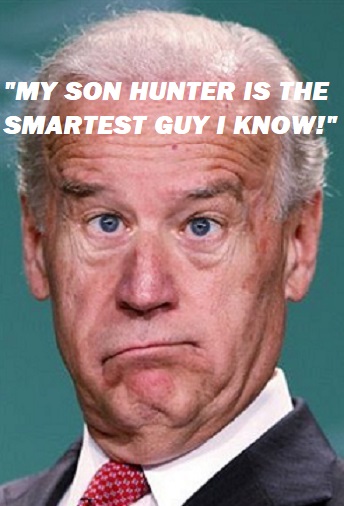 Joe Biden calls his son Hunter ‘the smartest guy I know’ amid questions over business dealings at an online event hosted by Oprah Winfrey.

According to Adam Shaw of Fox News, “Democratic nominee Joe Biden on Wednesday described his son Hunter as ‘the smartest guy I know’ — amid growing questions about the former vice president’s alleged ties to his son’s business dealings.”

So, Hunter’s the smartest guy you know, Joe?

That would mean he’s smarter than your former boss, Barack Obama, then, wouldn’t it?

That would mean he’s smarter than you’re your other treasonous friends like Eric Holder, James Comey, John Brennan, James Clapper, Rod Rosenstein, Andrew McCabe, Chuck Schumer, Adam Schiff, Jerold Nadler, Robert Mueller, as well as all of the “scientists” and “experts” you know.

He just might be the smartest person you know!

You should have picked Hunter as your running mate, Joe!

So, what kind of track record does Hunter have that would lead you to this belief, Sleepy Joe?

Well, let’s take a look at some of Hunter’s distinguishing accomplishments.

Hunter Biden met and married Kathleen Buhle in 1993. The two divorced in 2017 after a 22-year marriage that produced three daughters. In divorce papers, Kathleen accused her ex [Hunter] of blowing family funds on drugs and prostitutes.

The same year as the split — as was first reported by “Page Six,” Hunter began dating his widowed sister-in-law, Hallie Biden, who had lost her husband, Beau, to brain cancer in 2015.

It was the least that he could do.

The two began dating while he was recovering from a crack binge, which he explained in a New Yorker interview last July took place while grieving his brother’s death.

Hunter had been kicked out of his marital home with then-estranged wife Kathleen over his failure to stay sober, and began spending most nights at Hallie’s house “sharing their grief” over his brother Beau.

After being made aware, the VP [Joe Biden] and second lady [Jill Biden] offered their blessing of the relationship in a statement.

Of course…, why wouldn’t they?

“We are all lucky that Hunter and Hallie found each other as they were putting their lives together again after such sadness. They have mine and Jill’s full and complete support and we are happy for them,” the two said at the time.

Such a loving family!

In late 2019, Hunter entered a court battle over unpaid child support for a baby he fathered with ex-stripper Lunden Alexis Roberts.

Roberts filed a suit against Hunter in November after he denied being the father of their child, born in August 2018, and subsequently declined to pay child support.

Deadbeat Dad’s are so “in” right now.

In January 2020, an Arkansas judge ruled that Biden was the “biological and legal father” of the baby, noting that a DNA test had showed “with near scientific certainty” that Hunter was the parent.

Well, Joe, we have to follow the science, right?

The two reached an out-of-court settlement in which Biden agreed to retroactively pay child support going back to November 2018.

A nobler act has never been seen.

Hunter has since gotten remarried to a South African woman named Melissa Cohen, whom he wed just 10 days after meeting her.

So wise as well!

Hunter Biden has long suffered from drug problems, and it even ended his brief attempt at a military career in his 40s. He was discharged from the Navy Reserve in February 2014 after he tested positive for cocaine.

“It was the honor of my life to serve in the US Navy, and I deeply regret and am embarrassed that my actions led to my administrative discharge,” he said after news of his discharge broke.

Hunter was arrested in 1988 for drug possession, something he admitted to in a 2006 disclosure form after being nominated to serve on the Amtrak Reform Board by President Bush.

In November 2019, “Page Six” exclusively reported that the former vice president’s son was suspected of smoking crack inside a Washington, DC, strip club where he dropped “thousands of dollars” during multiple visits.

The incidents, which took place at Archibald’s Gentlemen’s Club late last year, represents the most recent alleged drug use by Hunter Biden, who has acknowledged six stints in rehab for alcoholism and addiction.

When at first you don’t succeed…

No, really though, we should give him credit for the effort.

Page Six has also spotted Hunter Biden on multiple occasions at Larry Flynt’s Hustler Club NYC in Hell’s Kitchen. He was seen on each occasion with a woman who was not a dancer at the club. The two spent thousands each night on pricey booze and were joined by several strippers.

Such a giving person.

At one point, a stripper was scrambling to buy a sex toy so others could use it on him.

Hunter has also been accused of profiting off his father’s vice-presidential status by earning tens of thousands of dollars per month to sit on a board for Burisma, a corrupt Ukrainian energy company, in an industry in which he had no prior experience.

Huh.  What a coincidence!

Hunter’s role with Burisma raised red flags for some in the Obama administration’s State Department, which a recent Senate Homeland Security Committee report found were raised to Biden and those in his orbit.

Hunter’s action “raised red flags” with Hillary Clinton and Susan Rice over at the State Department?

“Despite the efforts of these individuals, their concerns appear to have fallen on deaf ears,” the report says.

“Moreover, this investigation has illustrated the extent to which officials within the Obama administration ignored the glaring warning signs when the vice president’s son joined the board of a company owned by a corrupt Ukrainian oligarch.”

And the FBI has sat on Hunter’s infamous laptop for close to a year as well.

Well, after all of the money the Biden’s received from Russia and China, this Ukrainian deal was relatively peanuts.

Joe Biden has said of Hunter, “I have never spoken to my son about his overseas business dealings,” including his reported $83,000 monthly pay on Burisma’s board.

That Senate report also found that in 2014, Hunter Biden received a $3.5 million wire transfer from Elena Baturina, the richest woman in Russia and the widow of Yury Luzhkov, the former mayor of Moscow.

One can only imagine what Hunter did to earn $3.5 million from this woman!

Both he and Hunter have denied any wrongdoing with respect to Ukraine, and spokespeople for Joe Biden’s campaign have repeatedly slammed the Senate probe as biased and political.

So, I guess we should all tip out hats to Hunter Biden…, the smartest guy that Lyin’ Joe Biden knows!

Here’s to you Hunter!

If you’re not already “following” me and you liked my blog(s) today, please let me know by “clicking” on the comment icon just to the right of the date at the bottom of this article.  From there you can let me know if you “like” my blog, leave a comment or click the white “FOLLOW” button at the bottom of that page, which will keep you up to date on all of my latest posts.