“The Chinese use two brush strokes to write the word ‘crisis.’ One brush stroke stands for danger; the other for opportunity. In a crisis, be aware of the danger–but recognize the opportunity.”  ― John F. Kennedy

According to Sam Dorman of Fox News, “The Chinese government intentionally manufactured and released the COVID-19 virus that led to mass shutdowns and deaths across the world, a top virologist and whistleblower told Fox News host Tucker Carlson on Tuesday.”

According to Sam Dorman of Fox News, “THE CHINESE GOVERNMENT INTENTIONALLY MANUFACTURED AND RELEASED THE COVID-19 VIRUS THAT LED TO MASS SHUTDOWNS AND DEATHS ACROSS THE WORLD A TOP VIROLOGIST AND WHISTLEBLOWER told Fox News host Tucker Carlson on Tuesday.”

Well, if you’re a liberal, you can’t be much more credentialed than that…, a scientist and a whistleblower?!!!

It would appear that China calculated the DANGER of the virus to themselves, while recognizing the OPPORTUNITY to enhance their position on economic playing fields all around the world, and especially with the United States, and deemed this trade-off to be acceptable.

Even though the virus originated in China, China comes in ranked 41st for number of cases with 85,223 and only 4,634 deaths.

How could that be?

Is it coincidence that three of the top four democracies in the world ended-up being the hardest hit in the world, by far?

And that’s not to mention the collateral damage worldwide regarding the economic, social, general health and mental health impact to all of the countries around the world.

Just some food for thought. 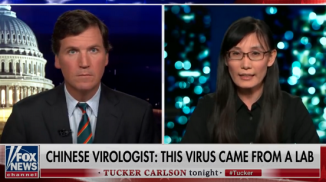 “Yan said more evidence would be released but pointed to her own high-ranking position at a World Health Organization [WHO] reference lab as a reason to trust her allegation.”

‘“So, together with my experience, I can tell you, this is created in the lab … and also, it is spread to the world to make such damage.’”

“Yan’s comments conflicted with the opinion of Dr. Anthony Fauci, director of the National Institute of Allergy and Infectious Diseases and White House coronavirus adviser, who previously cast doubt on the idea the virus was artificially created. In May, he told National Geographic: ‘If you look at the evolution of the virus in bats, and what’s out there now is very, very strongly leaning toward this [virus] could not have been artificially or deliberately manipulated — the way the mutations have naturally evolved.’”

Excuse me Dr. Fauci…, but you have no idea what the hell you’re talking about here.

You have absolutely no idea of what went on in that Wuhan lab.

And, you’re only throwing shade on the idea of the virus being man-made because you and your deep state friends are all a part of problem.

“Other scientists have also panned the idea that COVID-19 served as a sort of bioweapon or was released by a lab.”

On what basis have they “panned” the idea?

These other scientists also have absolutely no idea of what went on in that Wuhan lab, and should just keep their opinions to themselves.

You can always find a gaggle of “other scientists” who will either agree or disagree with whatever narrative you wish to promote.

We are all aware of this now, so citing scientific support really doesn’t add any value to your propaganda anymore.

“Fox News previously reported on Yan back in July, when she blew the whistle on China’s alleged attempts to suppress information about its handling of the virus. With a vast network of contacts in Chinese medical facilities, Yan attempted to gather more information about the virus as China blocked overseas experts from conducting research in the country.” 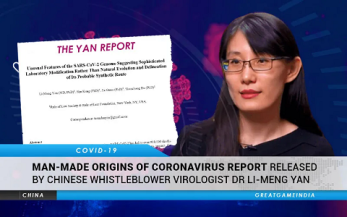 “Her revelations fueled ongoing complaints that the Chinese government failed to tell the world early on about the virus’ threat. Specifically, she believes the Chinese government ignored research that could have saved lives. The State Department did not immediately respond to Fox News’ request for comment.”

And the ever-complicit fake news media has, of course, chosen to ignore Dr. Li-Meng Yan, while choosing to support their good friends in the Chinese Communist Party.

“In response, her former employer, the University of Hong Kong, criticized her account. A press release noted ‘that the content of the said news report does not accord with the key facts as we understand them.’”

‘“Specifically, Dr Yan never conducted any research on human-to-human transmission of the novel coronavirus at [the University of Hong Kong] during December 2019 and January 2020, her central assertion of the said interview.’”

Please remember that the Chinese Communist party’s fake news is even faker than our own fake news…, so what was said there is to be completely expected.

“Yan, who said she was one of the first scientists in the world to study the novel coronavirus, fled China and currently fears retaliation. She was allegedly asked by her supervisor at the University/WHO reference lab, Dr. Leo Poon, in 2019 to look into the odd cluster of SARS-like cases coming out of mainland China at the end of December 2019.”

Now, let’s dive a little deeper down the rabbit hole.

Why would the US have funded the controversial Wuhan lab?

The US funded the controversial Wuhan Institute of Virology; the level four virus Chinese research facility.

I ask you…, why in God’s name would we be funding anything the Chinese Communist Party is doing?!

In case you forgot, we are already in debt to China up to our eyeballs, and here we are funding the controversial Wuhan Institute of Virology; the level four virus Chinese research facility?!!!

I keep feeling our government is incredibly stupid, but then I have to remember they only want us to think they’re inept, when in reality they are corrupt and calculating.

Justin Fendos, a professor at Dongseo University in South Korea, for The Diplomat, an international online news magazine, reports that “Newsweek recently put out some surprising reports that the U.S. National Institutes of Health (NIH) had funded the controversial Wuhan Institute of Virology (WIV). The WIV is the level four research facility suspected by some of being a possible source for the coronavirus that causes COVID-19. U.S. Secretary of State Mike Pompeo has already been on record confirming and defending this funding, saying it was ‘to protect American people from labs that aren’t up to standard.’”

Nice try Mike…, but I’m not biting on that one. Please don’t tell me that you are one of “them” too?!

“According to Newsweek, funding for the WIV occurred in two phases. The first took place from 2014 to 2019, through a $3.7 million project for collecting and studying bat coronaviruses. This work was largely led by Dr. Zhengli Shi, known to many as ‘batwoman’ for her years investigating caves in search of new bat viruses.”

Okay, this phase I can understand, being started during Obama’s time in office.

“The second phase began shortly after, with another $3.7 million. Unlike the first, this project appears to have included work on ‘gain-of-function’ research that investigates how a virus can gain the ability to infect a new type of animal.”

Now this second phase is the one I don’t understand.  I’m guessing the Trump administration was just unaware of this funding, and now Pompeo is just trying to justify it somehow.

“Anyone with a vague sense of current events would, understandably, be concerned that COVID-19 might have been produced through this research.”

“The connections to the NIH would also be unsettling, offering the possibility that the U.S. government may be complicit, having unnecessarily ‘outsourced’ dangerous research.”

I’m not only “concerned” and “unsettled,” I’m disgusted and outraged.

“Although strong denials by both Chinese and American officials and several pieces of scientific research have concluded COVID-19 is not man-made, the connection between the NIH and WIV still behooves critical examination.”

Again, the obligatory denials and supportive research by the co-conspirators is to be expected.

“Why would the NIH want to fund the WIV to begin with?” Professor Fendos asks.

Yes…, exactly…, why would they?

Let’s take a look at the possible lame reasons they are prepared to offer!

“The first, and perhaps most important reason, may be just as Pompeo said: to help bring Chinese labs up to higher safety standards.”

Oh, yes!  This is a major concern of ours.  None of our other social programs in this country could use almost $8 million.  No, not at all.

“Another reason the NIH may have decided to provide funding is to help foster international cooperation and better communication.”

Oh, yes!  We can all see China’s increased willingness to cooperate now!

“A third reason could be the fact that the United States has long held a fierce debate about the ethics and risks of gain-of-function (GOF) research. Critics, such as Harvard epidemiologist Marc Lipsitch, have argued that such work ‘entails a unique risk that a laboratory accident could spark a pandemic, killing millions.’”

Would that include an intentional “laboratory accident?”

“Unfortunately, from the public’s perspective, reports about the connection between the NIH and WIV are at risk of feeding conspiracy theory fires. With some Chinese officials already blaming the United States for the pandemic and the Trump administration appearing intent on blaming China in return without divulging any decisive evidence, it is quite difficult, even for experts, to develop a fully-informed opinion about what exactly happened. And therein lies a dangerous problem: unanswered questions can only deepen peoples’ suspicions about science.”

“Chinese officials blaming the United States for the pandemic?!

HOW CAN CHINA, WITH A STARIGHT FACE, POSSIBLY BLAME THE UNITED STATES FOR THIS VIRUS THAT ORIGINATED IN CHINA (MAN-MADE OR NOT) AND WAS INTENTIONALLY ALLOWED TO LEAVE CHINA AND INFECT THE REST OF THE WORLD?!!!!!!!!!

“Put simply, the circumstantial evidence surrounding the WIV and its connections to the NIH are a bad look for science.”

Not to mention the Chinese Communist Party and the liberal “deep state” in the United States.

And do you think using the term “bad look” is appropriate?

I was thinking more of a term like a “politically corrupt look,” or how about an “inexcusably evil look?”

“As the pandemic rages on, the worst possible thing is for the rumor mill to latch onto uncertainties and convince more people that the voice of science is not to be trusted.”

Translation: The worst possible thing would be for the whole ugly truth to come out about this virus.

“COVID-19 may have begun in a lab, or not. Either way, the only thing that remains certain is that science will be the brightest light guiding us out of the pandemic. Since there will be plenty of time to divvy blame later.”

I’m sorry professor, but there won’t be “plenty of time to divvy blame later” for the 941,000 people who have died from the China virus, so far.